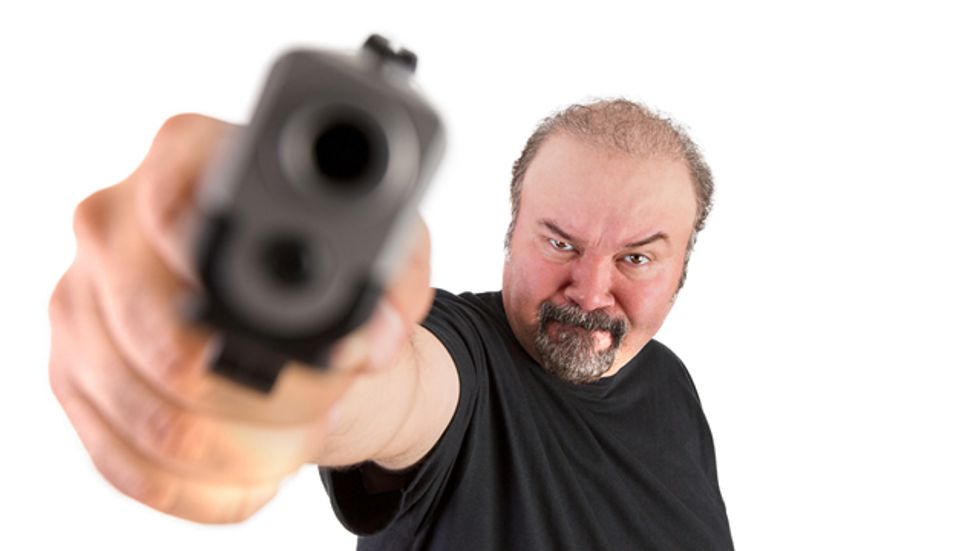 A black Minnesota man recorded a tense confrontation with a white man who pulled a gun after apparently mistaking him for a drug dealer.

Demetrius Taylor, of St. Paul, said he was sitting with his nephew in a parked car that he was considering buying when a resident began photographing them.

Taylor got out of the car to confront the man, who has not been identified, while using his own cell phone to record video of the encounter.

That’s when the man pulled a gun and loaded a bullet into the chamber, Taylor said.

The man denied pulling a gun, although he can be seen holding a handgun in the video, and tells Taylor the neighborhood has “a lot of drug dealing going on.”

The man angrily denies Taylor’s suggestion that he stereotyped and racially profiled him by assuming he was dealing drugs.

“If it was two white guys or something right there – are you crazy?” Taylor says. “I didn’t come over here with a gun. Because I’m walking down the street with a camera, you pull a gun on me? Are you serious? Because I’m coming down the street with my camera out – like you are – you pull a gun out on me? When you pulled your camera out, I didn’t pull out a gun. Come on, now.”

“You’re racist, dude,” the man says, complaining that Taylor suggested he had made race-based assumptions about him.

The man insists he didn’t see what color Taylor was until he confronted him.

“Stop it,” Taylor says. “Stop it, stop it. I have it here. You pulled a gun out on me. You pulled out your gun and you charged it. You charged your gun right there – you racked one in your slide. Your hammer is probably still back.”

The other man then begins talking to someone on his cell phone and complaining that he’d been accused of prejudice.

Taylor reminds the man he’d pulled a gun on him as he walked on a public street.

“Sometimes you don’t have to take the law in your own hands all the time, sir,” Taylor says, as the other man puts away his phone and walks away.

Taylor tells the man he’s in the neighborhood visiting his mother, and he tells him he doesn’t live on the North Side of Minneapolis – a mostly black neighborhood known for gang violence.

“I tried talking to you,” the man says from across the street. “Do you want to have a conversation or not?”

“I’m afraid – you have a gun, sir,” Taylor says, as a man on a bicycle approaches. “I am not having a conversation with a person – watch out, he has a gun!”

“He has a gun, I just want you to be aware,” Taylor tells the bicyclist. “There’s people walking around recklessly charging guns.”

Watch video of the encounter posted online by BestForNews: