Was the news media shamed into covering the murders in Chapel Hill? 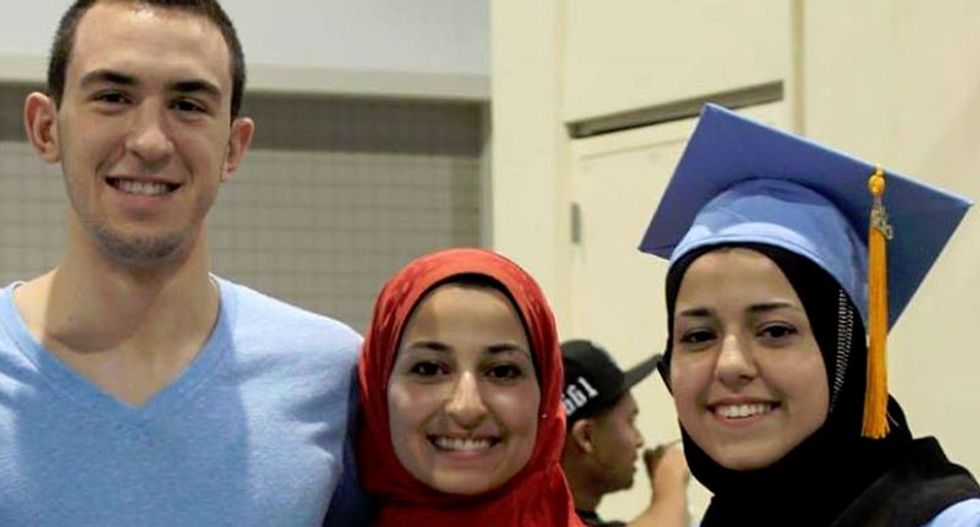 If a guy kills three of his neighbors over a parking spot, it’s a local story, maybe a national news brief. Its newsworthiness is predicated on the appalling flimsiness of the casus belli: Some folks are so tightly wound they’ll kill over trespasses that the rest of us might find mildly irritating.

If perpetrator and victims are of different races, ethnicities, religions or sexual orientations, it’s potentially a national story, maybe even an international story. Its newsworthiness is predicated on the possibility that the killing was a hate crime.

Of course, the fact that there are such differences doesn’t automatically mean that a hate crime was committed. Some people hate everyone. Before reporting that a crime against an “other” was a hate crime, one needs A) the perpetrator to confess his hatred or B) a witness who heard the perpetrator confess his hatred or C) a pattern of hateful words and deeds aimed at the group in question, from which one could reasonably infer that the crime was motivated by hatred.

In the killings of three Muslim students by a non-Muslim in Chapel Hill, NC, last week, there was no confession and no eyewitness account. That leaves discovery of a pattern of hateful words and deeds.

So here is what we know so far: Craig Hicks posted anti-religious rants on his Facebook page. That was good enough for many press bashers on social media. As one blogger wrote, “Given Hicks’ extreme anti-religious tendencies, it should be assumed the religion of the victims played an important role in his targeting them.”

And if one does assume that the shooting of Deah Barakat, Yusor Abu-Salha, and Razan Abu-Salha was a hate crime, journalists should have stopped the presses. That is, the story should have been reported, promptly and prominently, in the national media.

The American press may indeed be Islamophobic, but coverage of Chapel Hill so far cannot be read as confirmation of that bias. Consider the time and the place. Though the shootings occurred around 5 p.m., the identity of the victims and Hicks’ anti-religious postings were not made known until later. For all the talk of the 24-hour news cycle, news that breaks after-hours outside the major media markets is not going to command immediate attention unless it’s cataclysmic.

Given current tensions in the world, a triple murder motivated by anti-Muslim hatred would indeed qualify as major, but news organizations do not mobilize the troops on the basis of “what should be assumed.” Nor should they.

The police said the killings seemed to have been motivated by a parking dispute but that they would also investigate the possibility that it had been a hate crime. So that is what news outlets reported initially.

The New York Times site on February 11, the day after the shooting in Chapel Hill.

Little new information about Hicks’ motives had emerged in the previous 24 hours. Had The Times seen the error of its ways? Or had social media reaction itself magnified the newsworthiness of the story? (One would like to see Times public editor Margaret Sullivan shed some light here.)

Either way, the critics should have been pleased. They weren’t, though. The Mainstream Media (MSM), complainants wrote, should not have to be shamed into reporting important news. As one Tweet put it, “media covered something after you worked to make it the #1 hashtag in the world, so no bias against Muslims!"

Get it first, get it right

Notably absent from this barrage of news media criticism is any mention of sensationalism. Hate crimes are much juicier stories than parking disputes. Here might be a case of the press exercising admirable restraint rather than pushing a storyline that might eventually prove to be unwarranted.

“Get it first,” we tell our journalism ethics students, “but first, get it right.”

It’s a neat formulation. The first part acknowledges competitive pressures. The second part is a reminder that accuracy must take precedence over beating the competition.

When journalists succumb to competitive pressure and get the story wrong, as some did in reporting the death of Rep. Gabrielle Giffords, misidentifying the perpetrator of the Newtown, Conn., school shootings, and other breaking news dating back to “Dewey Defeats Truman” and beyond, they get pilloried for abandoning time-honored standards of verification.

When they wait to report until they verify, they’re criticized for being too slow and too implicated in the power structure to report stories that might challenge the status quo.

That is the status of journalism nowadays. The skepticism is healthy. The knee-jerk condemnations are not. Can one say such things without being branded an Islamophobe, a media apologist, a naïf? We shall see.