White and gold or black and blue? Here's why we see this dress so differently 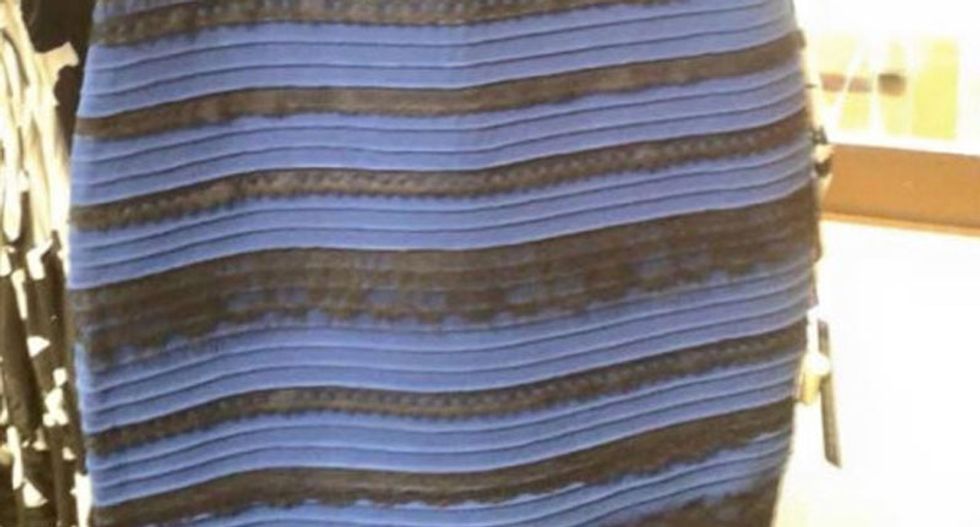 There has been passionate debate on the internet over a blue and black dress that to some people – perhaps even the majority – appears white and gold. But what is the reason behind a discrepancy that has caused such division within households and offices?

The story began when Caitlin McNeill posted a picture of a dress that was worn to a wedding, but no one appeared to be able to agree on what colour it was. The picture, and debate, went viral.

Colour vision in particular works in three main stages. We have receptors in the eye for just three colours, roughly, blue, green and red. We then make comparisons between the colours in a further three ways: red versus green, blue versus yellow (the sum of red and green for lights) and bright versus dark.

These comparisons are made over different times and different points in space. So if we stare at a blue screen for a long time, when we then view a white object it may appear yellow. Similarly, an orange spot will appear red when surrounded by green, and green when surrounded by red.

Finally, the colour signals are passed to the visual cortex, where the brain tries to work out the colour of the illumination from all the colours available and then calibrates the colours of the objects according to this illumination colour. This is called colour constancy, and it’s what stops the apparent colours of objects changing during the day.

With the blue dress, it’s possible that some people have more blue photo-receptors than other people, or that their colour contrast system is biased for or against blue. But the most likely explanation is that colour constancy is responsible for the differences of opinion. When the dress occupies most of the image, some people take the blue cloth as their reference for the illumination and so see the dress as white cloth in blue light and the black frills as gold or yellow.

Yellow things don’t reflect much blue and so ought to look dark in a blue light. People correcting for a blue light will therefore see the dark frills as yellow. But other people may use the background objects as their white reference and so see the dress as a blue garment in a yellowish-white light. These people will see the frills as dark because dark frills remain dark when compared with a white light.

By Andrew Schofield, University of Birmingham