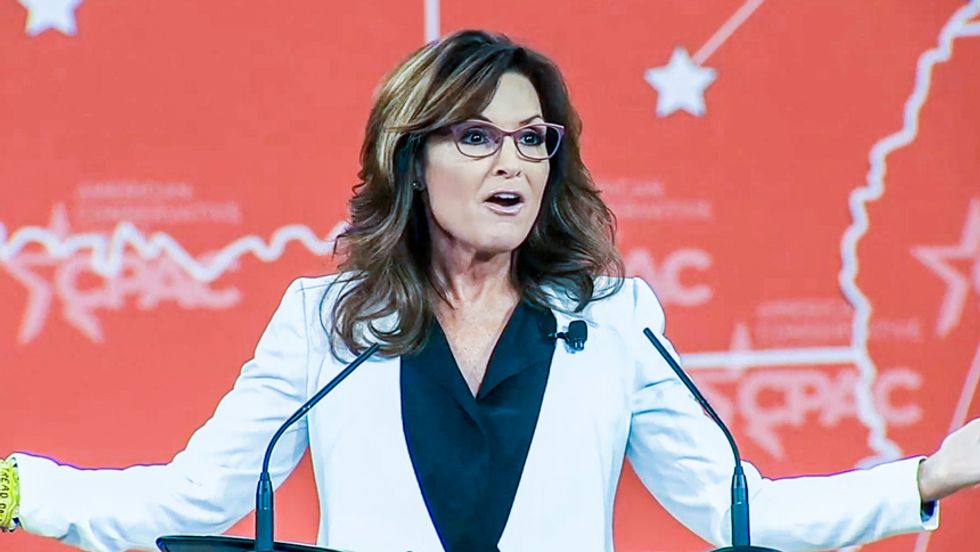 "She was almost vice-president," Iadarola pointed out to his co-hosts, after calling Palin the event's "queen clown."

During her speech, Palin drew applause from the crowd for a mocking reference to a State Department spokesperson's remark last week that simply killing members of the Islamic State (ISIS) terrorist group will not end their threat against the Middle East.

"They say we can't kill our way out of war," Palin said. "Really? Tell that to the Nazis. Oh wait, you can't, because they're dead. We killed them."

Palin's flip tone was not lost on co-host Jimmy Dore.

Iadarola and co-host Desi Doyen pointed out that, not only did Germany surrender to end the war -- leaving many Nazis and their collaborators alive -- but the U.S. worked with former Nazis to gain information.

"We could list so many facets of this, where she both doesn't understand ISIS and also -- perhaps more disturbingly -- does not understand the war against Nazi Germany at all," Iadarola said, arguing that Palin failed to comprehend the difference between fighting a political movement that took over a specific country and a "loose amalgamation" of terrorist groups working together in several countries.

The group then veered into comparing CPAC to perhaps its closest progressive equivalent, Netroots Nation, saying that the latter never made time for "crazy liberal stuff."

Watch their commentary, as posted online on Friday, below.

Empire of chickenhawks: Why America's chaotic departure from Afghanistan was actually perfect

The biggest fallacy about our exit from Afghanistan is that there was a "good" way for us to get out. There is no good way to lose a war. With defeat comes humiliation. We were humiliated in the way we pulled out of Kabul — and we should have been, because we believed the lies we had been told right up to the last moment.

According to a report from the Washington Post, Republican election officials in states that are currently starting up 2020 presidential vote audits of their own or are considering initiating one, are having second thoughts after the embarrassing end of the Maricopa County, Arizona audit that seemed to show that President Joe Biden won by a larger margin than first reported.

The Arizona audit, conducted by the pro-Donald Trump Cyber Ninjas, was supposed to turn up evidence of voter fraud that would not only flip the state to Trump, but would also be used as proof that the election may have been stolen from the Republican candidate.

Danielle J. Brown, Florida Phoenix
Months ago, Gov. Ron DeSantis approved a controversial law that would require Florida's colleges and universities to conduct a survey intended to gauge whether institutions of higher education promote “intellectual freedom and viewpoint diversity."
At the time, critics questioned what those surveys will ask, how intellectual diversity will be measured, and what will happen with the results.

Three months later, very few of those concerns have been answered or addressed and there's also a lawsuit.

In August, the United Faculty of Florida (UFF) joined a federal lawsuit against state education officials, arguing that aspects of the law threaten the right to free speech. The federal lawsuit was filed at the U.S. District Court for the Northern District of Florida by faculty members and students of Florida's college and university systems.