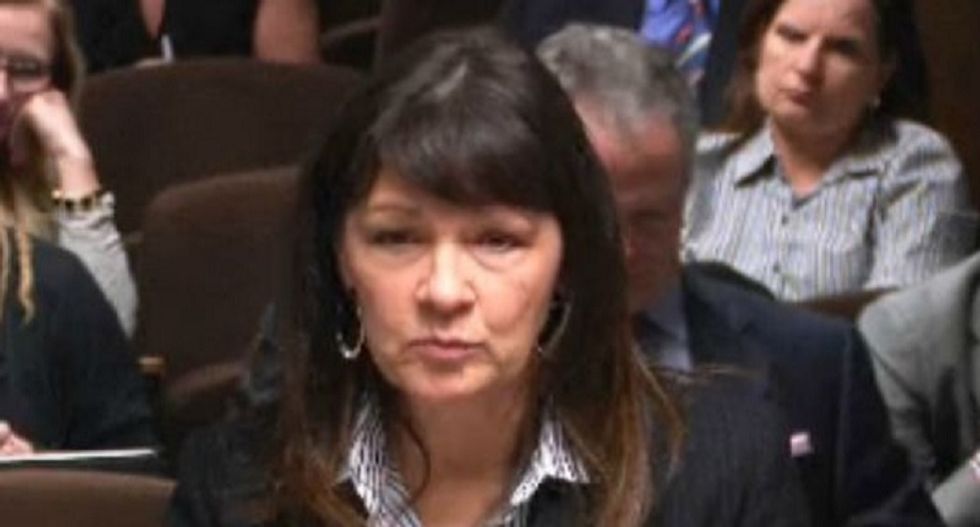 Tucson lawmaker Victoria Steele became the latest Democratic lawmaker to spill her guts about being the victim of sexual assault in order to try and slow down conservative Republicans who are bound and determined to chip away at the right to have an abortion.

Across the country, right-wing Republicans are introducing clever bills about consent or hospital privileges or the dozen other strategies that they claim are about protecting women but are really pretty naked attempts to make it almost impossible, or at least very unpleasant, to get an abortion in this country.

At the end of 2013, Republicans in the Michigan legislature came up with the neat idea of requiring women to buy special "abortion insurance" before they found themselves needing the procedure. It was just another cynical conservative ploy to make women feel ashamed about their bodies and the stark choices they find themselves having to make. Before that bill passed, a Democratic senator, Gretchen Whitmer, stood up and, through tears, made public for the first time that she had been raped in college.

Whitmer tried to impart to her robotic conservative colleagues that the last thing you want to have to deal with in such a situation is wrestling with insurance companies about whether you're covered or not. Whitmer's Republican colleagues passed the measure anyway.

Now, it's happened again, this time in the cauldron of right wing experimental lawmaking known as the Arizona Legislature.

An old friend of mine, Arizona Republic reporter Richard Ruelas, happened to be watching the streaming coverage of a committee meeting at the state capitol when something really remarkable happened. Ruelas tells me that he wouldn't have had his eye on it if the bill the committee was debating hadn't already resulted in a ruckus.

The bill, SB 1318, will try to keep Arizonans who are covered by Obamacare from getting insurance plans that include coverage for abortion. (Arizona is one of the states that chose not to create a state insurance exchange, so residents are getting their plans through the federal exchange.) The bill also tacks on some typical conservative restrictions that are designed to do an end run around Roe v. Wade. Doctors who provide abortion in the state would have to have hospital admitting privileges (this is intended simply to limit the number of clinics that provide abortion in the state, and it's already state law anyway) and those doctors would also have to submit information proving they have those privileges. Critics of the bill say this is a ploy to get the private information of doctors onto public websites, making them more vulnerable to harassment.

Also, an amendment to SB 1318 had been added that forces doctors to engage in pseudoscience: Abortion providers would be required to tell patients that a "morning after" pill can be reversed if certain hormones are taken right away -- a claim that has not been tested clinically. Again, it's just another conservative ploy aimed at making it difficult for women to make a choice about their own bodies.

On Wednesday, this bill was being heard before a committee called -- and we're not making this up -- the "Federalism and States' Rights Committee." Yes, Arizona is run by people whose intellectual development stopped after they read Ayn Rand in high school. The committee chair, Republican Kelly Townsend, admonished the room for some unruly behavior over the bill, and limited everyone speaking to only two minutes.

The third person to come up to speak to the committee was Representative Victoria Steele of Tucson, a two-term legislator who used her two minutes to complain about the amendment that required doctors to recommend a completely untested and unproven procedure to "reverse" the morning after pill.

"This is not based on science," she said, and she added that the only thing the bill was really about was restricting women's health care.

At that point, Townsend, the chair, asked the Democrat a challenging question. How, she asked, is "medically induced" abortion, "health care"?

There's really no arguing with that kind of pseudoreligious right wing agitprop. But Steele found a way.

"To answer your question I will tell you a personal thing. But it requires a bit of personal background," Steele said to Townsend, and then she had to pause and gather herself. She told Ruelas later that she hadn't planned this, and it was obviously difficult for her to get through. Then, she began:

"When I was a child, I was molested for years. By one particular person. And it turns out he had many, many victims. And one of the other victims told me, when we were adults, she asked him one day, what if I get pregnant? This man is a minister, he was my grandfather. And one of my relatives asked him, what if I get pregnant? And he said, 'Don't worry, we'll just stick a pencil up there and take care of it.' Another one of his victims ended up in the hospital, and nearly died. She ended up in the hospital after nearly dying from an illegal abortion. This was back in the days before abortion was legal," Steele said.

She then gathered herself and shot these next words at Townsend with force.

Townsend then tried to save the situation with some patronizing words to Steele. "Thank you, Representative Steele, that's very brave of you to use that example here in your testimony, and my apologies. I'm grateful that you prefaced it that it's an opinion that you hold. And I do believe that this bill does exempt rape and incest. So for that situation, we've taken care of that."

But Steele told Ruelas later that Townsend is wrong. An exception for rape and incest makes the bill no better, because it requires a woman to prove that she's been a victim when that's the last thing she may want to do in that situation.

"If you need an abortion, you shouldn't be put through this," Steele told Ruelas. "How would it affect people if they have to call their insurance company and get someone to believe they were raped?"

Despite Steele's dramatic and impromptu testimony, the committee's five Republicans outvoted its three Democrats to pass the bill, and it moves on to its next step.

"Steele said she thinks her story will resonate with lawmakers as the bill gets debated further," Ruelas wrote, but we have seen little evidence that the actual experiences of women -- even those who are lawmakers themselves -- is slowing down Republican monomania about this issue.

Watch Victoria Steele stun the committee with her testimony, from the legislature's official feed...