Bill O'Reilly tells David Letterman: I've never 'fibbed' on the air 'that I know of' 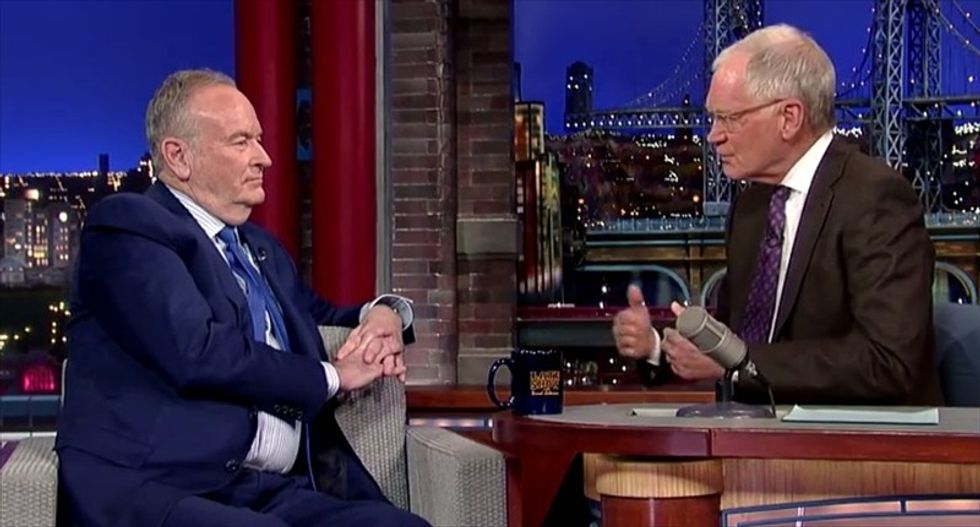 Fox News host Bill O'Reilly attempted to downplay the recent questions surrounding his recording in footage from his interview with CBS' David Letterman released on Tuesday.

"Have you ever fibbed on the air?" Letterman asked the Factor host.

"Fibbed? Not that I know of," O'Reilly responded. "What I do is analysis -- different from what other people do. So I bioviate and give my opinion, as you well know. But it's not worth it for me to do that."

Letterman countered that there was a common factor linking O'Reilly's editorializing and NBC's Brian Williams' position as a network anchor.

"Trust is the residue of both positions," the Late Show host said. "People must trust you to the same degree. They might disagree with you, but they must trust you, the same way they trust Brian Williams."

"And that's an excellent point," O'Reilly answered. "I'm in my 19th season now. Fifteen years at number 1. Our ratings now are as high as they've ever been, so I think they do trust me, and I'm glad they do."

The footage released thus far, however, only covers the first allegation that O'Reilly fabricated his reporting -- Mother Jones' report last month questioning his account of his experiences following the end of the Falklands War.

O'Reilly called the magazine's chief Washington correspondent, David Corn, a "despicable guttersnipe" following that story, but did not mention that insult when describing his response to Letterman.

"They didn't think that, because I hit it immediately hard and said, 'Look, this is the facts, this is what happened," O'Reilly said.

However, the footage does not contain any references to the discrepancies that have surfaced since then, including the apparent debunking of O'Reilly's claim that a friend of Lee Harvey Oswald's killed himself when the Fox host was at his front door, and his backtracking on a claim to have seen nuns being shot to death in El Salvador.

O'Reilly has remained largely silent regarding those incidents, while his network has responded to questions by boasting about his ratings, as he can be seen doing in the Letterman clip.

The footage, as posted online on Tuesday, can be seen below.