CPAC it in: Another year full of sound, fury, and idiots signifying nothing 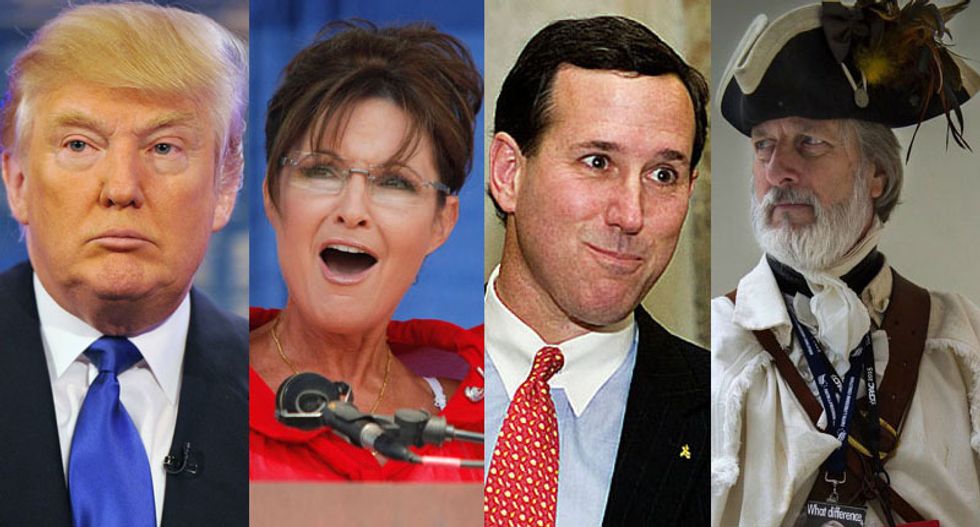 Donald Trump, Sarah Palin, Rick Santorum, some guy who is into cosplay

They have broken down the tents, scooped up the elephant poop, and swept up the sawdust as the CPAC candidate cattle call and circus rolls out of town leaving behind a ton of press coverage for an event that has little to no significance.

Because it is held in DC, it has more significance than, say, Steven King's Freedom Summit in Iowa, because -- like a snowstorm in New York City -- if it happens in city saturated with reporters and commentators, it's bigger and more important.

There are basically four groups who attend CPAC:

The 3-day event leads up to the big moment when the results of a straw poll will be revealed anointing The One  who shall lead them -- The Chosen People -- out of the Presidential Wilderness.

As you might expect from a  group of people who live in their own private epistemic closure bubble, their choices don't reflect much in the way of reality.

To date, of the 21 winners of the CPAC presidential straw poll, only 2 -- Reagan and George W. Bush -- went on to become president.

Mitt Romney won four times at CPAC, but has failed to gold medal in the Presidential Olympics.

Rand Paul, who won on Saturday, is tied at three with Jack Kemp, whose presidential administration America apparently slept through -- just like they did through one of his speeches.

Let's look at some other world beaters who took home the Straw Crown:

Asking the attendees at CPAC who should be their standard bearer in the next presidential election is like asking attendees at a midnight showing of the latest 'Transformers" movie if it is the best Tranformers movie yet, or the best movie ever.

The answer is almost always going to be wrong.