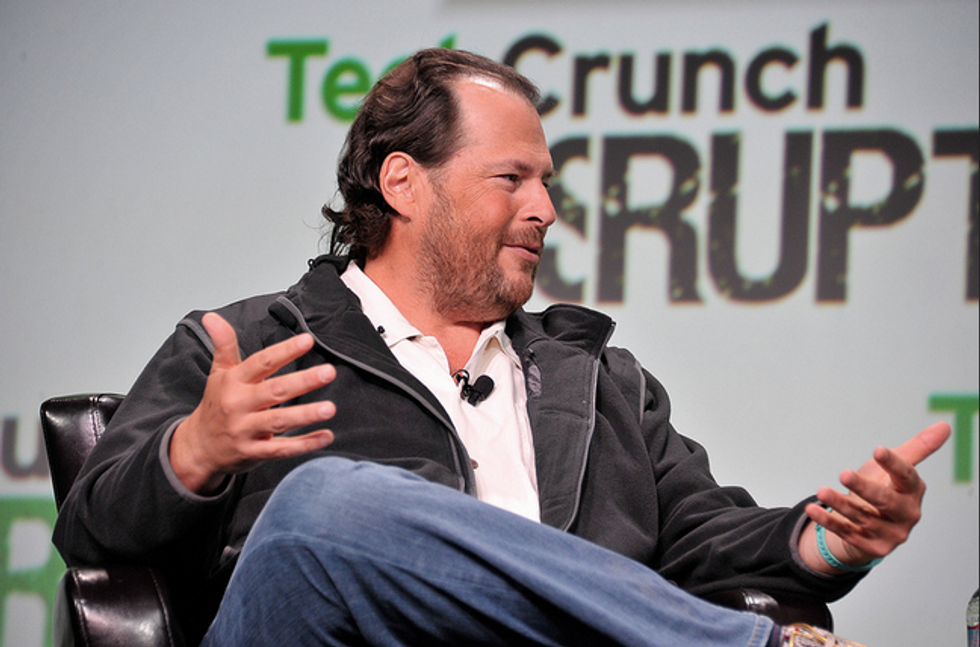 The cloud computing company Salesforce and the National College Athletic Association have both condemned Indiana Gov. Mike Pence (R)'s decision to sign into law a "religious freedom" bill that many rights advocates say could lead to anti-LGBT discrimination.

After Gov. Pence signed the bill on Thursday, Salesforce CEO Marc Benioff announced via Twitter that he would be making good on his threat to cancel all of the company's programs in Indiana.

Today we are canceling all programs that require our customers/employees to travel to Indiana to face discrimination. http://t.co/SvTwyCHxvE
— Marc Benioff (@Marc Benioff) 1427382147.0

He went on to urge other tech CEOs and industry leaders to avoid the state and others with laws like it because of the impact it could have on employees.

Attention Tech CEOs/Industry: pay attn to what is happening in IN & how it will impact your employees & customers. http://t.co/SvTwyCZ8nc
— Marc Benioff (@Marc Benioff) 1427384449.0

The NCAA -- which will host college basketball's biggest event of the year, the Men's Final 4, in Indianapolis -- published a statement warning that the law may discourage it from hosting future events in the state.

"The NCAA national office and our members are deeply committed to providing an inclusive environment for all our events," said NCAA president Mark Emmert. "We are especially concerned about how this legislation could affect our student-athletes and employees."

The Indianapolis Star quoted Emmert as saying, "We will work diligently to assure student-athletes competing in, and visitors attending, next week's Men's Final Four in Indianapolis are not impacted negatively by this bill. Moving forward, we intend to closely examine the implications of this bill and how it might affect future events as well as our workforce."

According to Talking Points Memo, "A number of businesses warned that there could be blowback to the governor signing the legislation. Gen Con, a major table top gaming convention, threatened to pull its convention out but its contract isn't up until 2020. Actor/activist George Takei, NBA star Jason Collins, and the Eli Lilly company, one of the state's largest employers, have all spoken out against the law."