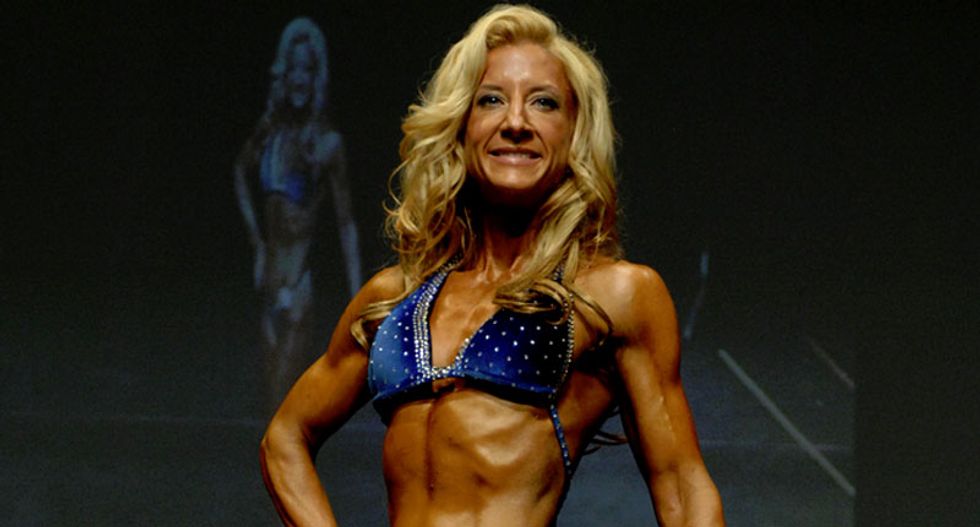 In June 2011, I competed in a figure/bodybuilding competition as a form of embodied research. This photograph shows me standing onstage during the Northern Alberta Bodybuilding Championships, wearing a tiny blue velvet bikini and high heeled plastic shoes while covered in tanning dye.

Figure is a category of physique competition in which women train like bodybuilders to increase their muscle mass, focusing on growing a wide back and strong legs. They then gradually lose fat to reveal those muscles, ideally displaying small waists to create a desired “X” shape.

As a specialist in the early modern body in France (1550-1750), I had written books and articles about the history of childbirth, illness, health and medical portraiture. And I had worked for decades inside libraries, archives and museums.

At age 45, however, I needed a new challenge and decided to use my own body and my own life as sites for learning. I wanted to try what was for me a new approach to producing knowledge.

I decided to undertake an auto-ethnographic project, analyzing my own experiences within broader cultural frameworks to interrogate the gendered dynamics of fitness culture and assumptions about the practice of bodybuilding.

I was exploring popular topics such as body image, fat phobia and feminism, which are misrepresented in much popular culture. I started to write about these topics for broader audiences in a blog.

At first I thought that becoming a figure girl was at odds with my feminist identity and politics. I was not interested in being objectified and judged in terms of my appearance instead of my intelligence. Yet I discovered that figure competitions can benefit women, helping them to be strong, independent, and to reject gender norms.

The successful figure girl is, after all, larger and more muscular than your typical fashion model. She also eats a lot of chicken and sweet potatoes, without apology.

For me, feminism involves a commitment to expanding opportunities and diminishing restrictions in the lives of girls and women (which in turn improves the lives of boys and men). It does not involve producing or enforcing rules for living, but encourages everyone to think critically about sexism and gender roles, starting with their everyday experiences.

My posing and walking lessons were informative – I was awkward and simply could not convey the proper form of femininity. In this process, I made connections with many amazing women and men, who taught me how to appreciate my physical strengths.

I strove for an impossible ideal

Like many figure girls (and women in general), I strove to embody an impossible ideal. In the end, my failure to conform was a liberating experience.

I learned that bodybuilding is not really about discipline and mastery; it is about pursuing long term and in many ways impossible goals in a consistent, intensive and open-ended manner.

In the process of body-building Lianne McTavish learned that body-building is also about pursuing long term and in many ways impossible goals in a consistent, intensive and open-ended manner.

Bodybuilding is a lot like academic work. I begin any research project in order to create new knowledge and not reach predetermined conclusions. The Feminist Figure Girl project allowed me to try out different methods, meet new people, write for different audiences and produce a scholarly book, Feminist Figure Girl: Look Hot While You Fight the Patriarchy.

In it, I offer these and other arguments about bodybuilding, linking it with yoga, while focusing on what it feels like not what it looks like. In Chapter Two, for example, I analyze the sensation of muscle failure – it happens when you lift weights repetitively to the point of muscle exhaustion – arguing that it is an enlightening and potentially transformative experience.

In Chapter Five, I examine the role of photography in physique culture, focusing on the act of being photographed instead of the resulting images. Sometimes bodybuilding is equated with photographs, like the one of me onstage included with this article, but I must admit that this photograph conceals more than it reveals. For instance, it does not show the years of lifting weights, months of strict dieting (I ate a ton of chicken, bison, egg whites, sweet potatoes and oatmeal) and a final week of contest preparation, which included a period of water loading before days of water restriction in an effort to make my body look tight and vascular during the competition.

This picture alone does not tell the whole story

Nor does the photo portray the sheer misery that I felt while standing onstage, dehydrated, with a spitting headache and throbbing feet. Figure girls – figure boys do not exist – wear crystal encrusted bikinis and four-inch heels while onstage, moving through front, back and side poses for a panel of judges. Afterwards, exhausted figure girls rush backstage to drink water and eat cheesecake.

Also, this picture says little about the practice of bodybuilding.

For serious bodybuilders, their own bodies are the primary sources of knowledge. Real bodybuilders, such as those who compete multiple times, work hard to learn about their own flesh. They discover what foods best fuel their muscle growth, whether their bodies retain water or shed it very quickly, like mine did.

They do not strive for a static ideal, but inhabit a body that continually changes, whether bulking up during a phase of muscle growth, leaning out for a show, recovering from injuries, or performing a flawless posing routine.

It is not possible to maintain a strict diet

Finally, this photo shows a body that is unsustainable. I immediately became softer after the show, gaining weight as I drank water and indulged in carb-laden meals. I have since trained hard to increase my muscle mass, but these muscles are no longer visible because I cannot maintain the strict diet required.

I have also had a baby since then, relishing the fascinating bodily changes that occurred in an entirely new context. The static fiction portrayed in my onstage image has little to do with real flesh, which is always changing as we live and learn.

By Lianne McTavish, University of Alberta