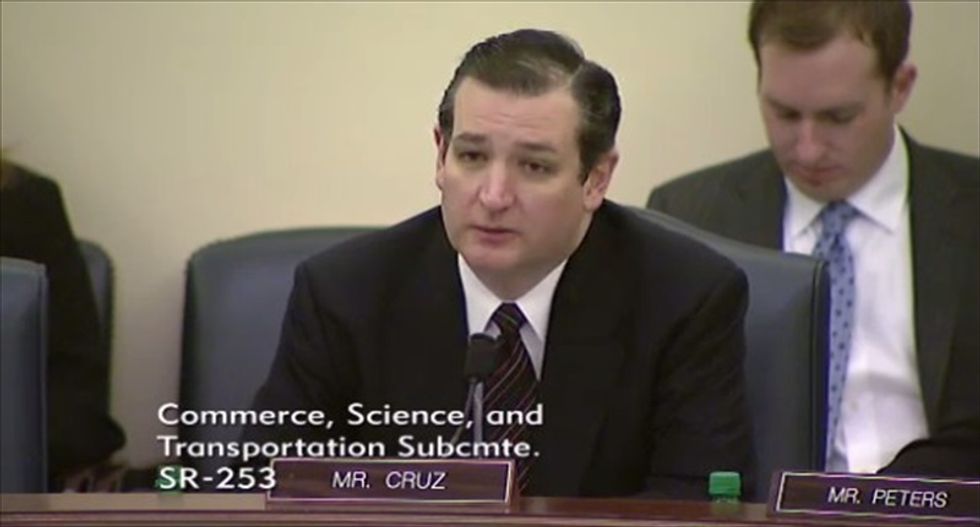 Sen. Ted Cruz (R-TX) during meeting of the Senate Commerce Subcommittee on Space on March 12, 2015. [YouTube]

Two days after bombing in a speech before a firefighters' union, Sen. Ted Cruz (R-TX) was rebuffed in a Senate subcommittee hearing while trying to criticize NASA's increased emphasis on studying climate change, Mashable reported.

"We can't go anywhere if the Kennedy Space Center goes underwater and we don't know it — and that's understanding our environment," NASA Administrator Charles Bolden told Cruz on Thursday. "It is absolutely critical that we understand Earth's environment because this is the only place we have to live."

The exchange came during a meeting of the Senate Commerce Subcommittee on Space, which Cruz now chairs. Cruz expressed skepticism toward President Barack Obama's $18.6 billion budget request for the agency -- specifically recent increases in funding for studying Earth phenomena compared to a slight decrease in money for space exploration efforts.

"I would suggest that almost any American would agree that the core function of NASA is to explore space," Cruz said. "That's what inspires little boys and little girls across this country. It's what sets NASA apart from any agency in the country."

Bolden explained that the decrease in funding for outer space-related projects was due in part to a desire to reduce the cost of those types of missions.

"The fact that earth science [funding] has increased, I'm proud to say, has enabled us to understand our planet far better than we ever did before," Bolden added. "It's absolutely critical."

For example, Bolden said, NASA supports studies in Cruz's home state of Texas that measured the effects of emptying out the state's aquifers on local land elevations.

"That's just looking at our environment, trying to make sure that we have a better place for all of us in which to live," he told the senator. "I think that's critical."

"The chairman has mentioned that he wants science to drive the process here," Peters said. "Here we have leading experts in our country on science saying that the cuts that we saw in earth sciences were disastrous in the Bush era."

Cruz's appointment to lead the subcommittee led to concern in the scientific community over having an avowed climate change denier in charge of the group controlling NASA's funding, with at least one scientist saying it was like "having the fox guard the chicken coop."

Watch footage from the meeting, as posted on Cruz's YouTube channel, below.