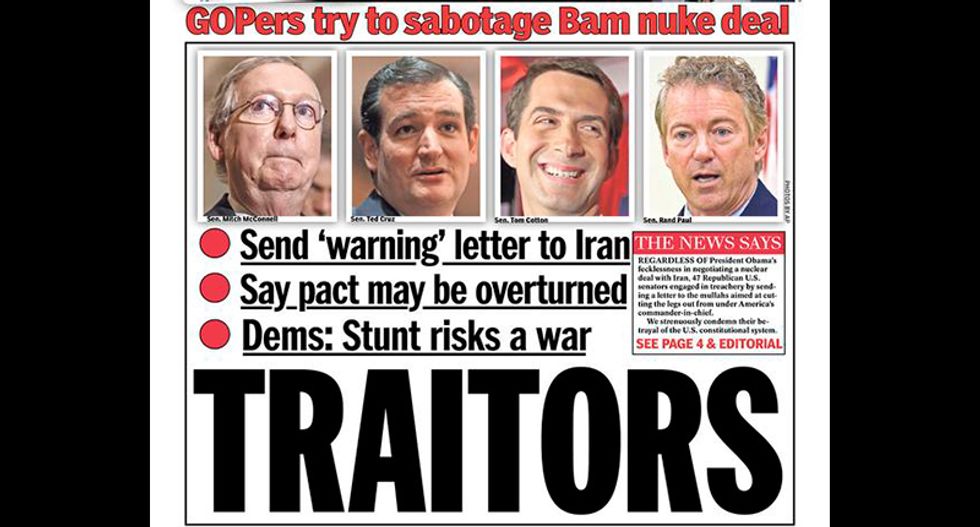 The New York Daily News released its cover for Tuesday morning, in which it calls Senate Majority Leader Mitch McConnell (R-KY) and three of his GOP colleagues "traitors" for their letter warning Iran about a prospective nuclear treaty with the U.S.

The cover, posted on the newspaper's Twitter account, features McConnell as well as Senators Tom Cotton (R-AR), Ted Cruz (R-TX) and Rand Paul (R-KY), singling them out among Republicans trying "to sabotage Bam nuke deal." It can be seen in full below:

As the Daily News reported, the four lawmakers were among 47 Senate Republicans who argued in an open letter to Iranian leaders that any agreement they may strike would not last beyond President Barack Obama's administration.

"We will consider any agreement regarding your nuclear-weapons program that is not approved by the Congress as nothing more than an executive agreement," the letter stated.

The Daily Banter and other outlets noted that the letter could be considered a violation of the Logan Act, which prohibits U.S. Citizens from starting or engaging in "any correspondence or intercourse with any foreign government or any officer or agent thereof" for the purpose of interfering with a foreign policy negotiation.

"This letter is neither advice, nor consent," The Banter's Michael Luciano wrote. "It's directly addressed to leaders of a foreign government presently involved in talks with the U.S., and it is designed to thwart those talks. Unless the senators were authorized by the president to address Iran's leaders in this letter, a case can be made that 47 U.S. senators just violated a federal law that carries a prison term of up to three years."

Obama said in response that the letter showed an "unusual coalition" between GOP legislators and "hardliners" in Iran. Vice President Joe Biden, a former senator, also ripped the letter, saying it was an unprecedented effort to undermine not only Obama, but any president.

"This letter sends a highly misleading signal to friend and foe alike that our commander-in-chief cannot deliver on America’s commitments — a message that is as false as it is dangerous," Biden said. "Honorable people can disagree over policy. But this is no way to make America safer or stronger."

Update: This story has been updated to properly attribute the Banter's story.