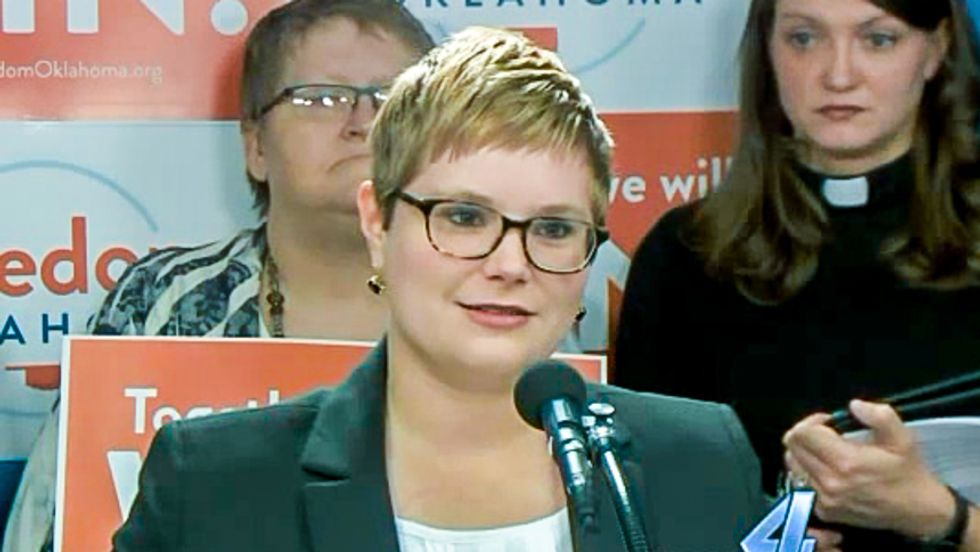 Oklahoma Democratic state Rep. Emily Virgin wants Christian businesses to post a public notice of discrimination if they intend to claim that they have a religious right to refuse service to LGBT people.

State Rep. Chuck Strohm (R) introduced a bill, the Oklahoma Religious Freedom Act, earlier this year that would allow businesses like wedding cake bakers and photographers to deny services if it was "against the person's religious beliefs."

State Sen. Joseph Silk (R), who introduced a similar bill in the Oklahoma Senate, told The New York Times recently that new laws were necessary because the LGBT movement was "challenging religious liberties and the freedom to live out religious convictions."

The amendment to HB1371 introduced by Virgin on Tuesday would require religious businesses to come out of the closet.

"Any person not wanting to participate in any of the activities set forth in subsection A of this section based on sexual orientation, gender identity or race of either party to the marriage shall post notice of such refusal in a manner clearly visible to the public in all places of business, including websites," the amendment states.

"The notice may refer to the person’s religious beliefs, but shall state specifically which couples the business does not serve by referring to a refusal based upon sexual orientation, gender identity or race.”

The Gayly noted that Virgin's amendment "would save minority couples from facing the indignity of being refused service."

“Thank you to Representative Virgin for calling out the level of segregation allowed under this legislation," Freedom Oklahoma Executive Director Troy Stevenson said in a statement. "If the state of Oklahoma is going to protect discrimination, then at the very least, businesses should be required to own their bias, and post it publicly for the world to see.”

Ryan Kiesel, director of ACLU of Oklahoma, also praised the amendment, saying that it "very pointedly exposes the absurdity of creating a new era of legalized segregation."