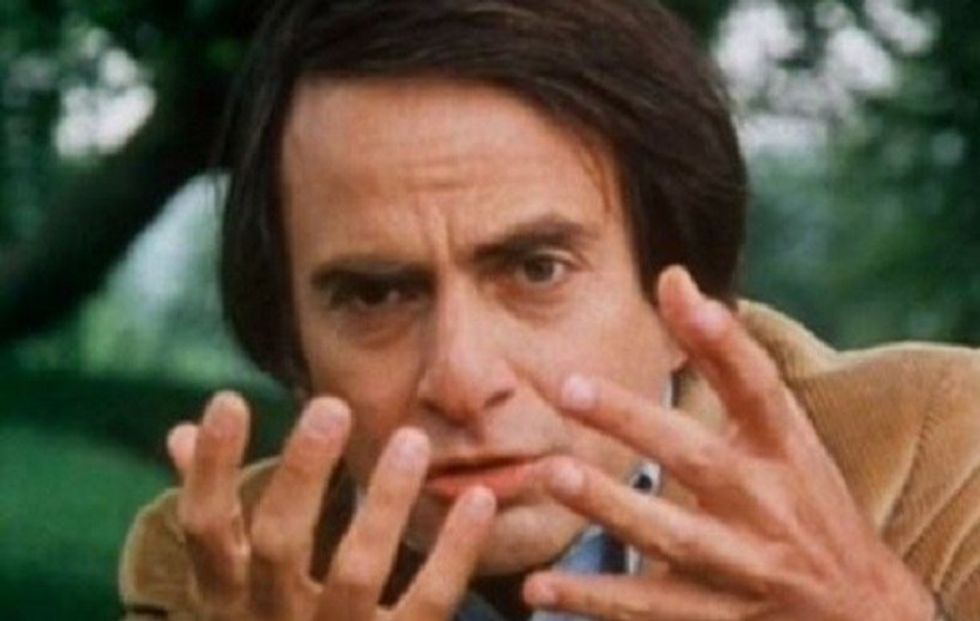 In an interview with Internet broadcast 9/11 Free Fall, the son of the late Carl Sagan claimed that there is a massive conspiracy to "cover up" evidence that the collapse of the World Trade Center tower in 2001 was an inside a job.

The interview was highlighted by Gizmodo on Thursday.

Jeremy Sagan, the son of Sagan and his first wife, biologist Lynn Margulis, told Free Fall host Andrew Steele that he grew more suspicious about the collapse after watching video at a friend's house, months after the attack that killed almost 2,700 people in New York City that day.

"Well, on first seeing it— I mean anyone seeing it can see that there's something suspicious about it. I remember and --I think it was New Year's 2002, I was at a friend's house, you know, and some parents of another friends, and they were saying Bush could never do something like this because he was incompetent. But in retrospect, now that I think about it, it's true," Sagan explained. "I don't think Bush could really do it, but that's why they had him skirted off into Florida, to, you know, get him a bit out of the way. In retrospect, you look at that and its obvious it was a controlled demolition."

Asked by Steele, who said he himself relies upon "instinctive evidence," with regard to 9/11 how he came to his conclusions, Sagan said he was basing it upon "visual evidence."

"I think the visual evidence is the most compelling. I mean you have like falling, free fall.  You have molten steel coming out of the building. I mean, obviously, also --- the evidence of thermite is very compelling," he explained. "The other thing I should say, if you look at building seven, the way everything was known before it happened. And the way it was reported in the media before it happened, that doesn't happen. [laughs] You know?"

Sagan, who is a computer programmer, lamented the fact that not all computer model data on the collapse has been released to the public due to public safety concerns.

"I think public safety is in quotes -- referring to their own behinds." He stated. "The fact that they won't release it is just proof, because science is peer-reviewed and all the data is made available so everyone can come to a consensus, and that's what moves us along."

"It's a cover-up, basically," he continued. "I mean, you can't release data that is going to show you are wrong. Why would you do it?"

Sagan also referenced his late mother, Lynn Margulis, who was married to his father from 1957 to 1965, who told Scientists for 9/11 Truth that she felt the 9/11 Commission was "a fraud."

"Certainly, 19 young Arab men and a man in a cave 7,000 miles away, no matter the level of their anger, could not have masterminded and carried out 9/11: the most effective television commercial in the history of Western civilization." Margulis said. "I suggest that those of us aware and concerned demand that the glaringly erroneous official account of 9/11 be dismissed as a fraud and a new, thorough, and impartial investigation be undertaken."

Sagan also admitted that he isn't entirely comfortable talking about his beliefs outside of "9/11 conventions", saying, "most people are believers in the official story," before adding that people are afraid to talk about it because "they have a nationalism."

Listen to the interview below, uploaded to YouTube by Free Fall:

MSNBC's Joe Scarborough isn't ready to count out Donald Trump for 2024, but he sees a lot of "warning signs" that should concern his supporters.

The "Morning Joe" host recalled the grassroots enthusiasm for the former reality TV star's first campaign, when crowds lined up around coliseums to pack into his rallies, but excitement has faded along with the support he needs from the Republican Party's donor class.