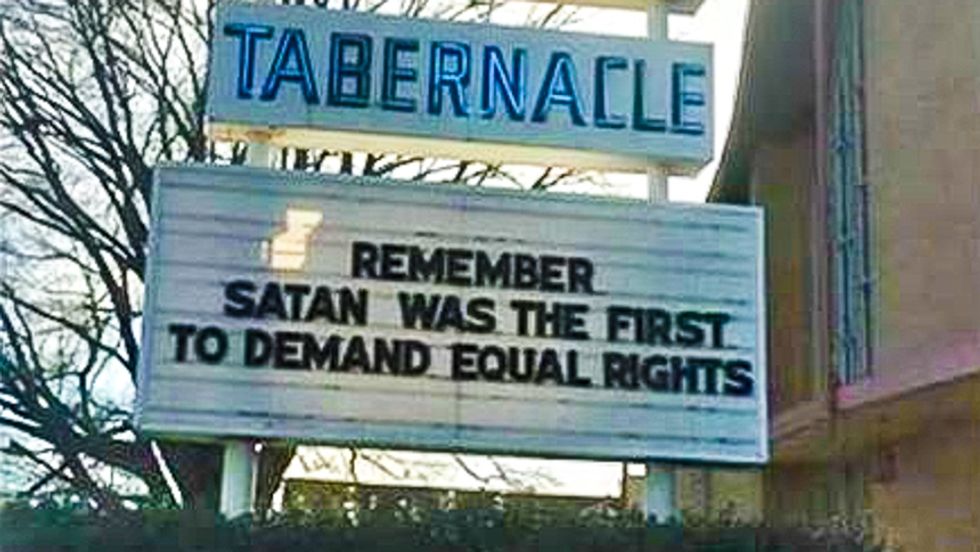 A Tennessee pastor said this week that his church was "not trying to offend anyone" when it put up a sign linking "equal rights" to Satan.

Members of the community expressed outrage over the weekend after photos of marquee outside the Knoxville Baptist Tabernacle Church were circulated online. The sign read, "Remember, Satan was the first to demand equal rights."

"Who was your target audience? Who were you speaking to when you put it up there?" Knoxville resident Rick Staples, asked, according to WBIR. "And when you say you're asking for your equal rights, who's asking for their equal rights and who are you comparing to Satan? That was very strong language."

Andy Henry said that the church was trying to make a statement about gay rights.

"It's clearly a sign that was meant to offend a particular community - the LGBT community. Because of (the church's) lack of foresight, they ended up offending everybody who had ever fought for equality or civil rights in general," Henry observed.

But Pastor Tony Greene insisted that everyone misunderstood the message.

“Our sign referencing Satan demanding his equal rights to ascend into the heavens and be God was simply ‘I’ and all about that individual,” Greene told WATE. “It was not a statement against any one group in particular, you know what about the rights of the unborn babies, the rights of children, the rights of everyone?”

He added: “My heart breaks in the dividedness of our country."

On Monday, the sign was changed to read, "Glad you reading, did not intend to offend, we all need Christ.”

American hellscape: Here is how Trump's well-armed shock troops could become even more deadly and barbaric​

With armed militia groups trying to take down our democracy, from January 6th to invading state capitols, things seem bad, maybe even Civil War bad. But if they hook up with the Christian right — with one small change to their ideology — we could be plunged into a hellscape right out of the tenth century.