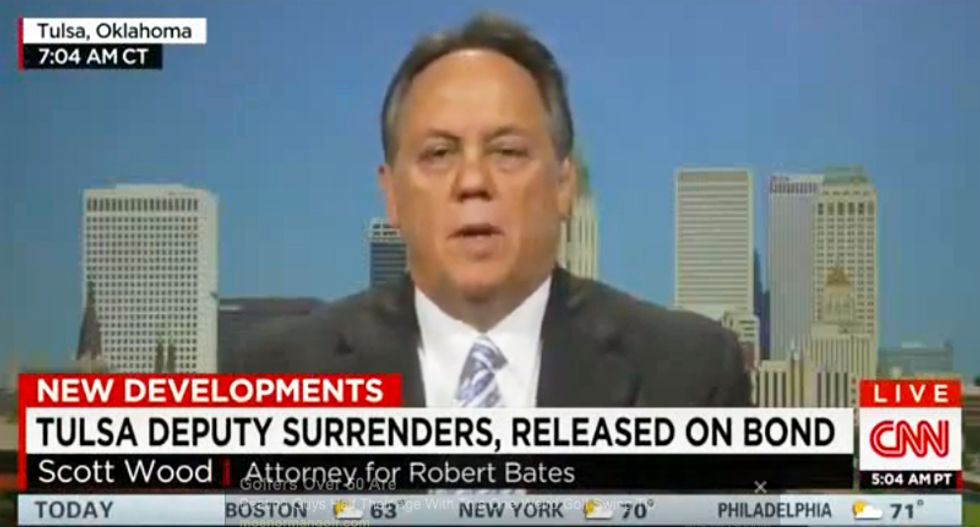 Appearing on CNN's New Day with host Chris Cuomo, the attorney for the Tulsa insurance executive who accidentally shot and killed a man after buying his way into the sheriff’s reserves said his client should not be facing charges in the man’s death.

Attorney Scott Wood believes the second degree manslaughter charge levied against Robert Bates is “inappropriate.” Bates shot and killed Eric Harris when he accidentally used his service weapon instead of his Taser.

"Well, this was truly an accident. Something that occurred by accident and misfortune which is an essential element of an excusable homicide defense here in Oklahoma, " Wood explained. "There was no culpable negligence under this circumstance."

"But isn't it by definition what you see in the law here, second degree manslaughter, that it's reckless disregard in the situation?" Cuomo asked. "Yes, it was accidental, but you want to play cop, you put on the Taser , you put on the weapon, you don’t know which one to use — you’re taking a risk when you go out there. Mr. Bates had to know that, and his lack of experience ended in another man’s death.”

“I don’t think characterizing his lack of experience is fair under the circumstances,” Wood said. "He's been on hundreds of these types of operations since he has been working with the task force since 2008. He's always been on the outside perimeter, and used in a back-up capacity. And in this case, Mr. Harris, so to speak, took the fight to him. When this buy/bust occurred, my client was over a third of a mile away sitting in a gas station parking lot, waiting to go to the service of a search warrant.”

"He was never intended to be in on the arrest, " Wood continued. "But the way the circumstances unfolded, that what happened."

Cuomo called the attorney's assertion that his 73-year-old client has been around hundred of cases like the one that led to Harris' death even more concerning.

"I know what the Harris family attorney is saying, and that's simply not true," Wood replied. "He is a certified reserve officer in the state of Oklahoma. If he wanted to go get in a patrol car and make an arrest, he is certainly legally authorized to do that in this state. He has chosen to work with a the drug task force, he has a certain affinity to fighting the drug problem that we have in the community, and certainly his contributions to the drug task force and the Sheriff office have had a dramatic impact over the last five or six years.”

Cuomo pressed Wood on his statement that Harris "brought the fight" to his client, pointing out that Bates "unilaterally" chose to reach for his weapons.

"He decided to use his Taser," Wood, replied before adding Bates was not the first law enforcement officer to use his weapon when reaching for a Taser.

Watch the video below, uploaded to YouTube by IaMnEwS: