Bill O'Reilly: Hillary Clinton has an advantage because it's 'open season' on white men 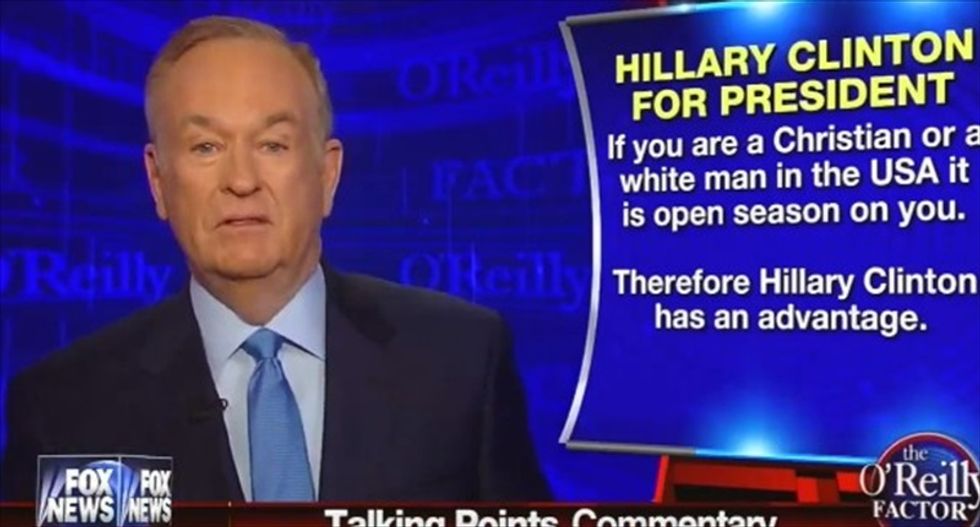 Fox News host Bill O'Reilly argued on Monday that Hillary Clinton's budding presidential campaign was already getting a boost due to the attack on "traditional American values."

"If you're a Christian or a white man in America, it's open season on you," he said. "Therefore, Hillary Clinton has an advantage. She can run a general campaign: 'First woman in the White House, and I'm gonna help you by increasing the entitlement society.' It will take a very articulate and tough-minded Republican to defeat her."

O'Reilly then promised to treat her campaign fairly, with one caveat.

"I don't think gender matters one bit," he argued. "And if this 'war on women' business is resurrected, we'll have something to say."

The Factor host then "strongly advised" the former secretary of state to avoid "guttersnipe organizations" like the progressive news site Media Matters, saying such groups use "despicable and dishonest tactics to attack those with whom they disagree."

"If you embrace the smear merchants, Mrs. Clinton, we will have something to say about it," he warned.

Neither he nor his network have directly addressed those reports. Instead, O'Reilly has argued that he is the victim of partisan attacks, while Fox News has emphasized his ratings.

Watch O'Reilly's commentary, as posted on Monday, below.