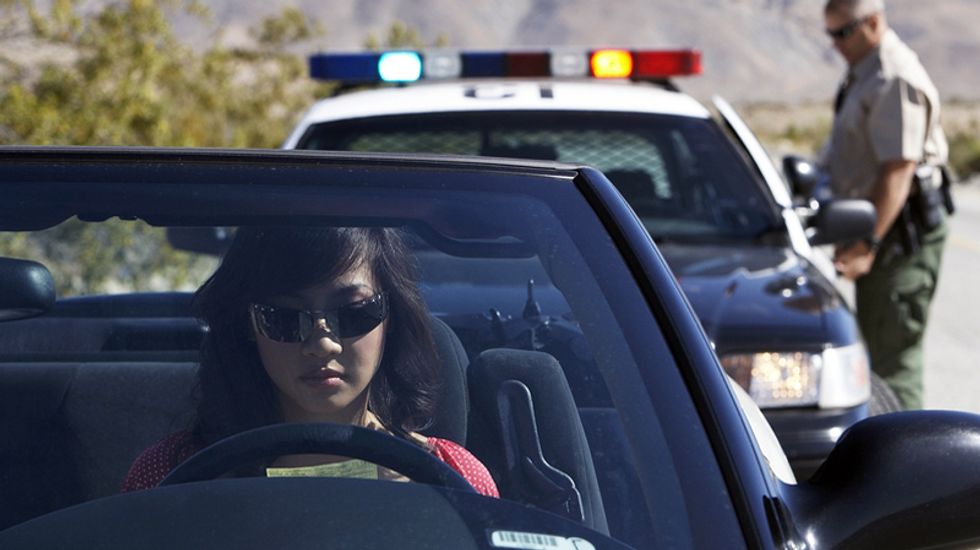 Women sitting in car being pulled over by police officer (Shutterstock)

Last month, the US Department of Justice released a damning report on Ferguson, Missouri and the way in which law enforcement agencies and the local court system raise revenues through municipal fines and fees that disproportionately impact Black residents. The DOJ investigation — which detailed patterns of unconstitutional arrests and unfair court penalties — garnered national attention for its stomach-churning stories of excessive police force, overtly racist actions of city officials, and widespread mistreatment in court.

By some measures, California is not all that different. That's according to a new report released today by a group of civil rights and legal aid organizations, who argue that courts throughout the state systematically extract revenue from residents with exorbitant fines and fees for very minor traffic violations. The report, "Not Just a Ferguson Problem: How Traffic Courts Drive Inequality in California," includes a range of troubling statistics and anecdotes that illustrate how courts in the state trap people in poverty. The report argues that traffic courts in California — through harsh fines and punishments that can be impossible for low-income people to overcome — are increasingly destroying people's lives over minor infractions.

There are a number of inequities in the system and ways in which a traffic violation can rapidly lead to overwhelming debts, according to the report, which was co-authored by the East Bay Community Law Center, the Lawyers’ Committee for Civil Rights of the San Francisco Bay Area, the Western Center on Law and Poverty, A New Way of Life Reentry Project, and Legal Services for Prisoners with Children. The most striking finding of these organizations relates to the courts' widespread practice of suspending drivers' licenses — a punishment that severely disrupts people's lives and is tied to fines that are often insurmountable for people living paycheck to paycheck.

Currently, more than 4 million Californians have had their driver's licenses suspended solely because they have not paid full fines for minor infractions, according to the authors of the report, who analyzed Department of Motor Vehicle data. That accounts for more than 17 percent of adult drivers in the state. For many, the trouble begins when people miss an initial deadline or court date for a traffic infraction, which results in significantly higher fees and penalties. The initial violation could be something as minor as failing to wear a seat belt, not fully stopping at a stop sign, or lacking proof of insurance.

Once people miss payment deadlines or court dates, local traffic judges and commissioners not only suspend their driver's licenses, but also issue a $300 civil assessment, which is added to whatever amounts are already owed, the report explains. These individuals subsequently cannot get their licenses reinstated until they have paid off the full amount, and while the debts are outstanding, they also lose their rights to a hearing. That means many individuals, after missing one court date, are barred from even bringing their cases in front of a judge until they can pay hundreds of dollars.

As a result, the report argues, people who are innocent or who missed a court date due to a medical emergency, for example, are effectively denied due process if they can't pay large fines upfront. Here's an excerpt from the report explaining the problems of this system, which, advocates argue, clearly favors wealthier people:

For many people, this collection system creates unjust results. While people who can afford to pay, do, many who cannot pay lose their jobs because they need a license to work. Parents cannot drive sick kids to medical appointments. Families must choose between food and traffic fines. Some, including identity theft victims, suffer these harms even when they did not commit the offense in the first place. The logical place to resolve these injustices is in court. However, missing a deadline to pay a traffic fine now bars entry for anyone who cannot pay up front: courts across California require the “total bail,” or maximum fine amount, to be paid before a person can exercise the right to a hearing. This means you must pay or lose your license, even if you didn't violate the law.

What's more, traffic courts handle a wide range of minor infractions that have nothing to do with driving, such as littering, sleeping on the sidewalk, or failing to pay transit fare. That means people accused of offenses unrelated to driving can easily lose their driver's licenses and get stuck with huge debts. And regardless of the original incident, when people lose their licenses, it can be significantly harder to find or maintain employment, which can subsequently make it much more challenging to pay the owed fees, advocates noted.

"Clients come to us and say, 'I've got all of this debt and can't get a job and I have no hope of paying it off,'" said Meredith Desautels, racial justice staff attorney with the San Francisco-based Lawyers’ Committee for Civil Rights, in an interview. "Too many people are just completely out of luck." In recent years, traffic courts across California "seem to be moving toward less and less due process and more and more aggressive collection," she added. "And license suspensions have become this presumptive tool for debt collection. It's just so contradictory and self-defeating."

Data also shows that this system disproportionately impacts communities of color, starting with the fact that minority residents are already stopped at significantly higher rates than white drivers.

The organizations are calling for a wide range of statewide reforms, including ending the practice of using license suspensions as a collection mechanism for citation debts; eliminating requirements that people pay full bail before they are allowed hearings in court; establishing uniform payment plans with sliding scales based on people's economic situations; and implementing a "fine amnesty program" that would allow people who currently have suspensions to restore their licenses.

Here are some additional statistics from the report, which also includes specific anecdotes from people impacted by traffic court:

-The rate of state fines has steadily increased over time, with a violation that once cost $100 now totaling nearly $500. That fine jumps to over $800 if a person misses an initial deadline to pay.

-In the past eight years, there have been 4.2 million cases in which the state suspended driver's licenses based on a failure to appear or pay fines.

-California currently has over $10 billion in uncollected court-ordered debt.

-A New Jersey study found that following license suspensions, 42 percent of people lost their jobs. Of those who became unemployed as a result of the suspensions, 45 percent could not find employment elsewhere.

-Over the past four years at the Lawyers’ Committee for Civil Rights, 70 percent of clients with driver's license problems were Black even though only 6 percent of the population in San Francisco is Black.

You can read the full report here: "Not Just a Ferguson Problem: How Traffic Courts Drive Inequality in California."