In Baltimore, '300 Men' group aims to be 'neutral force' between cops and protesters 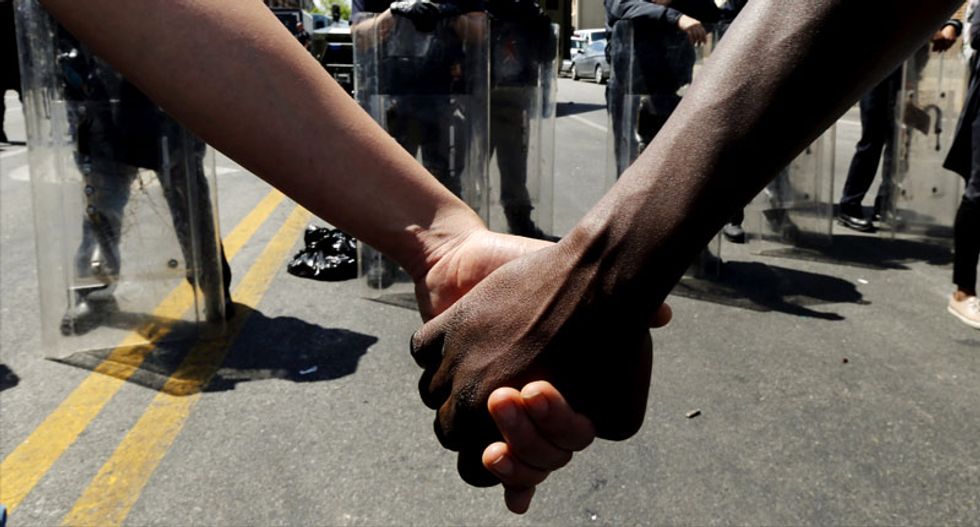 Members of the community hold hands in front of police officers in riot gear outside a recently looted and burned CVS store April 28, 2015. REUTERS/Jim Bourg

There were taunts, followed by a thrown bottle, and then the police pressed forward. Officers grabbed the man who attacked them and dragged him, thrashing, away. The crowd surged and a policeman fired pepper spray.

Quickly and quietly, a dozen men wearing black T-shirts inserted themselves between the officers and the throngs gathered to protest the death of a black man, urging calm on the crowd.

"We're like the neutral force," said Munir Bahar, co-founder of the 300 Men March movement, whose disciplined followers may have helped prevent greater violence on Tuesday at the protest's nexus at North and Pennsylvania avenues.

Bahar, a tax accountant and fitness enthusiast, said he founded 300 Men two years ago to reduce gun violence and murder in a city that has plenty of both. Now Baltimore is in the midst of some of the worst urban unrest in years, prompting a state of emergency and a citywide curfew.

Baltimore erupted in violence and looting on Monday, following the funeral for Freddie Gray, a 25-year-old black man who died on April 19 after suffering a spinal injury while in police custody.

The ensuing confrontation has brought in plenty of outsiders, from national politicians to international news media to representatives of Billy Graham Ministries, several of whom were in the crowd on Tuesday.

Bahar sees his job as bolstering an anxious local community where, he said, the presence of police is often not reassuring.

The beefed-up police presence, which was reinforced by the Maryland National Guard on Tuesday, "may not exactly make everyone feel comfortable," he said.

"We're here to bring comfort to the community," he said. "It's really just to inspire hope and more importantly to show these young guys that there are some older guys who care."

Earlier Tuesday, several miles east of the main protest site, about 100 men from the group were met with scattered applause as they marched down Monument Street in east Baltimore, in an area that also been the site of disturbances on Monday.

Bahar chatted with police and with Baltimore Mayor Stephanie Rawlings-Blake.

But down one side street, a young man drinking what appeared to be a large bottle of vodka, challenged the members of 300 Men March to return after nightfall.

Asked what would happen if his men were attacked, Bahar replied: "It's never happened in two years."

One of Bahar's top lieutenants, Oba Obaseki, said he and Bahar got to know each other at Maryland's Morgan State University, where they were involved in a mentoring program for young men called Brother 2 Brother.

Obaseki, who now lives in Washington, DC, said he and others walked the neighborhood around the main protest area on Monday, trying to calm tensions.

"The community was really taking care of each other," he said.

Amanda Marcotte, Salon
In the immediate aftermath of reports that Donald Trump had dinner with two notable antisemitic political figures — Nick Fuentes of America First and Ye (formerly Kanye West) — a simple excuse was floated to mitigate the backlash: It wasn't Trump's fault — he was sandbagged!

"I don't think anybody should be spending any time with Nick Fuentes," GOP House leader Rep. Kevin McCarthy said. He then falsely claimed Trump condemned Fuentes and that Trump "didn't know who he was."

In response, pro-democracy advocates argued that Trump's comments, other recent actions, and the refusal of GOP lawmakers to denounce them are reflective of the Republican Party's growing support for right-wing authoritarianism.

In a viral post on his so-called Truth Social platform, Trump wrote: