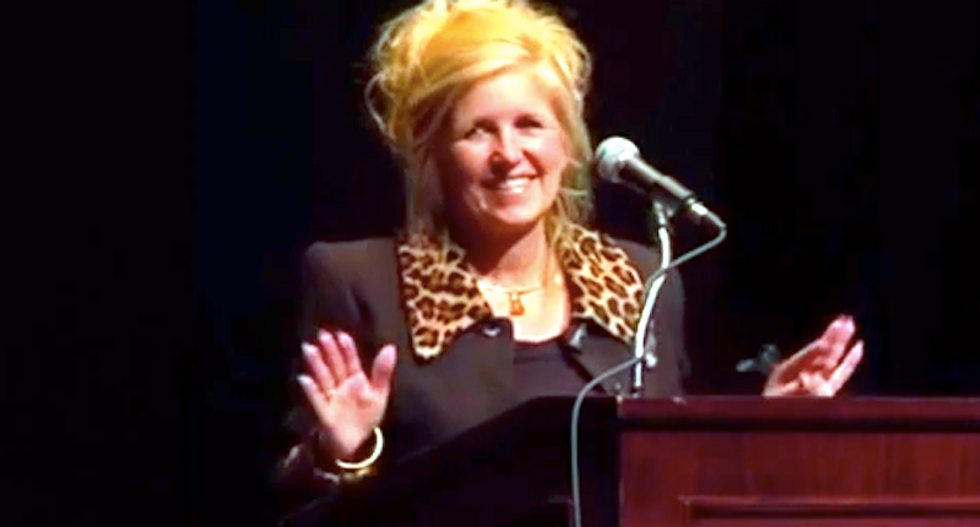 A Republican Party official in Iowa said recent statehouse invocations by a Wiccan and Muslim demonstrated why students should be taught Christianity in public schools.

Tamara Scott, a Republican National Committeewoman, joked to a gathering of religious conservative activists that she had greeted “the witch” Friday with a prayer for severe weather, reported Right Wing Watch.

“The storm outside was probably my fault,” Scott said. “I was praying for lightning – in love, just a little jolt.”

Lawmakers showed their Christian love by turning their backs on the priestess or praying through her invocation, and Scott warned that Muslims were also joining the assault on Christian values.

“When we’re not willing to defend our God in the public square, we shouldn’t be surprised when others try to replace Him,” said Scott, a lobbyist with The Family Leader.

“When we fail to teach it in the public school, the history of this nation, the God mentioned in our Declaration, the Supreme Being mentioned in the preamble of this constitution of the state,” she continued. “We not only don’t teach it, but we suppress it and refuse to allow it to be taught.”

Scott, who has previously warned that child migrants were being trained as warriors, said this encourages Americans to believe all religions should be treated fairly under the law.

“We shouldn’t be surprised when others do differently and expect differently and think that religion is just about equality, because it’s not,” Scott said. “There’s only one true God -- and the Bible’s quite clear about what happens when we refuse to tell the truth and we allow others to tell a wrong truth.”

She conceded that Muslims had a First Amendment right to promote their religion, but she said Christianity should be favored under U.S. law.

“The shame is that so little people know the truth about the heritage, the Christian heritage — I’m sorry, Mr. President, but we are, we were a Christian nation and we were founded on Christian values,” Scott said.