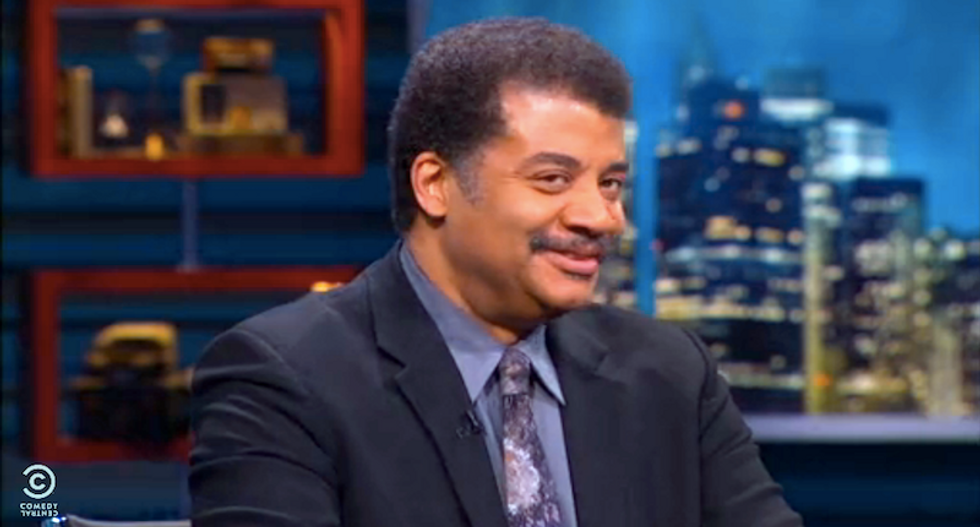 First off, Wilmore asked his head writer, Robin Thede, and comedian Mike Cannon – the host of the conspiracy podcast “Deep Inside The Rabbit Hole” – whether they believed the moon landing actually happened.

“Are you trying to blow my mind?” Tyson said, after Cannon conceded that he believed the landing had occurred but the television footage was staged.

“You can look at the Saturn V rocket, which got us to the moon and back, and calculate how much fuel is in there, and watch the thing take off, and ask yourself: Where the hell do you think this thing is going?” Tyson said. “There’s enough fuel to get you to the moon, and stuff left over to come back. It’s not just going down to the grocery store -- it is a Saturn V rocket.”

He dismissed the idea that the massive, 33-story rocket went to the moon so astronauts could stage landing footage.

“It went there but they faked the footage while they were there?” Tyson said. “What the hell sense does that make?”

Some conspiracy theorists point to the American flag seen waving on the grainy TV footage as proof the landing was staged, but Tyson said there was a scientific explanation.

“Since there is no air on the moon, anything set into motion – because they set up the flag, and he’s holding it and (then) lets go, the flag flips back and forth, and it doesn’t slow down because there’s no air to slow it down,” Tyson said.

Wilmore then asked Tyson whether he believes aliens exist, and if they do – “why are they so into butt stuff?”

“It’s not a matter of belief – if you look at the evidence, the evidence shows the universe is vast, it’s been around a long time, we are not made of special ingredients,” Tyson said. “It would be inexcusably egocentric to suggest that we are alone in the cosmos. That is a separate statement from saying that we have been visited by aliens giving rectal exams. It’s a completely different statement.”

Wilmore pointed out that black people never seem to report UFO sightings or alien abductions, and he suggested “we have a (mental) block against ships that might take us.”

“That hadn’t occurred to me,” Tyson said – but he had a scientific explanation for that, as well.

“It’s just that most black folk live in cities, most of the United States live in densely populated cities, and aliens that visit us tend to be shy and only visit places where there are hardly any people to minimize the eyewitnesses that could account for it,” he said.

Wilmore said millions of Americans said in a recent poll that they doubted musician Stevie Wonder was, in fact, blind – pointing to a recent video showing him grab a falling microphone stand.

Thede said she suspected Wonder might have at least some sight capabilities because so many of his songs, including “Ribbon in the Sky,” feature visual elements – but Tyson offered a philosophical explanation.

“Maybe there are certain things that only become visual to you – to your heart, to your mind, to your soul – by the act of not laying sight upon them in the first place,” he said.