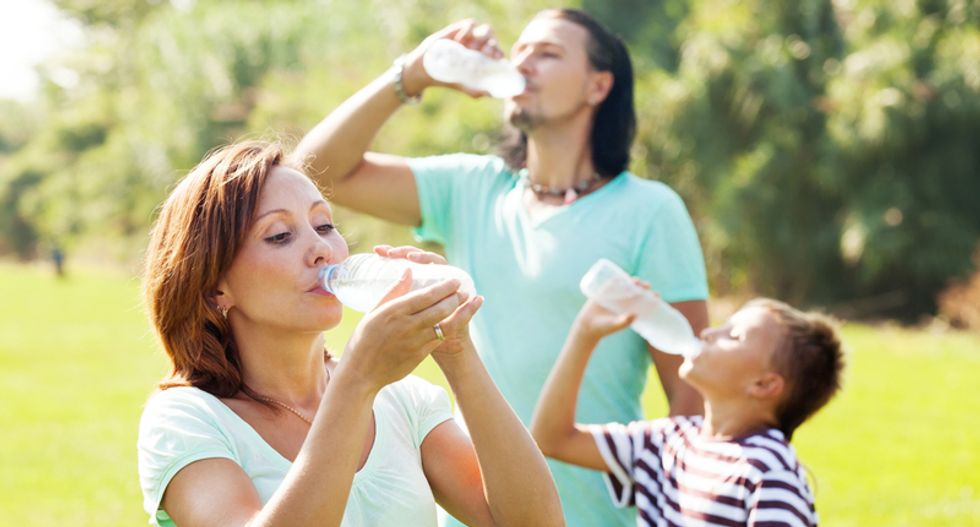 Californians facing the prospect of endless drought , mandated cuts in water use and the browning of their summer lawns are mounting a revolt against the bottled water industry, following revelations that Nestlé and other big companies are taking advantage of poor government oversight to deplete mountain streams and watersheds at vast profit.

An online petition urging an immediate end to Nestle’s water bottling operations in the state has gathered more than 150,000 signatures, in the wake of an investigation by the San Bernardino Desert Sun that showed the company is taking water from some of California’s driest areas on permits that expired as long as 27 years ago .

Last month a protest at a Nestlé Waters North America bottling plant in Sacramento, the state capital, forced a one-day closure as protesters brandishing symbolic plastic torches and pitchforks blocked the entrances. The revelations have agencies from the California State Water Resources Control Board to the US Forest Service scrambling to justify a regulatory framework that is poorly policed and imposes almost no requirements on the big water companies to declare how much water they are taking.

Nestlé itself insists its water use is efficient and has minimal impact on the environment – something the activists reject out of hand.

“While California is facing record drought conditions, it is unconscionable that Nestlé would continue to bottle the state’s precious water, export it and sell it for profit,” says the petition, which is sponsored by the political activist organisation the Courage Campaign.

While city-dwellers and tourists might not think twice before knocking back an Arrowhead – Nestlé’s premier California still water brand – or a Crystal Geyser, residents near the affected springs and watersheds tend to be more vocal, because every drop Nestlé takes is one drop less for their own use and for the local flora and fauna.

“Nestle has repeatedly ignored requests from local residents to halt its operations,” said Erin Diaz of the nonprofit Corporate Accountability International , which is running a “Think Outside the Bottle” campaign. “It’s clear that Nestlé has no intention of voluntarily halting its dangerous water bottling practices. It’s time for state water regulators to step in.”

Nestlé and its competitors point out that bottled water accounts for a tiny fraction of California’s overall use, particularly when compared with the state’s vast agricultural infrastructure. Almond farming alone sucks down 10% of the state’s water, at a rate of roughly one gallon per almond.

Related: Is it fair to blame almond farmers for California’s drought?

But water-bottling also carries symbolic weight because it takes a natural resource that theoretically belongs to all and turns it into a product retailing for many thousands – some studies suggest hundreds of thousands – of times what it costs at source.

Studies over the past decade and a half have challenged the claims of an industry that barely existed 25 years ago that bottled water is healthier than tap – in fact somewhere between one quarter and one half of bottled water comes from the tap – and decried the environmental impact of the plastic bottles it usually comes in.

“Pure drink or pure hype?” the National Resources Defense Council asked in 1999, and the question has never gone away. Until now, however, such objections have had little impact on the growth of the industry, whose sales topped 10bn gallons in the US for the first time in 2013 – 32 gallons per person – and are projected to be as high as 13bn gallons in 2014.

The US is now the world’s second-biggest consumer of bottled water, behind China. Nestlé and the other water giants, Coca-Cola and Pepsi, have often cut deals with relatively isolated, impoverished rural communities whereby they take a percentage of the local water supply, paying enough to keep municipal rates low for local residents. Government oversight often falls between the cracks of state agencies, the US Forest Service and autonomous Indian tribes, giving the companies greater leeway.

The Desert Sun investigation found that a Nestlé pumping operation at Strawberry Creek in the San Bernardino National Forest, 60 miles east of Los Angeles, had been unlicensed since 1987. Another operation in the same National Forest, at Deer Canyon Springs, involves a deal between Nestlé and the local water district that has not been permitted since 1994.

The US Forest Service, which has undergone multiple budget cuts over past decades and has been under attack for its handling of fire prevention and restoration in the parched American West as well as water management, now says that dealing with the expired permits and considering whether to renew them is now a “top priority”.

One key question will be how much water Nestlé is taking to create what one industry group delightfully calls “the quintessential hydrating beverage”. The company claims 700m gallons a year, or about what it takes to keep two golf courses green. That might more easily be verified if legislation to force regular disclosure of volumes bottled and sold had not been vetoed by former governor Arnold Schwarzenegger in 2008 and 2010 .

Another regulatory headache, according to the activist group Food and Water Watch, is the near-absence of legislation governing groundwater – an absence largely explained by the lobbying power of agribusiness in a state that boasts the single most productive concentration of farm land on the planet.

Related: California water restrictions have not stopped the sprinklers from flowing

Governor Jerry Brown, who has come under fire for imposing a 25% reduction in water use on cities and municipalities but not on farms, signed a relatively toothless law last year that gave the state no power to assign rights to groundwater use.

According to Adam Scow, California director of Food and Water Watch , the governor and state agencies could in theory disregard the legislature and act on the California constitution which bars “waste or unreasonable use” of the state’s water supply.

“We need to start managing and protecting groundwater as a public resource,” Scow told the Guardian. “In a drought, bottling public water for private profit qualifies as wasteful and unreasonable.”