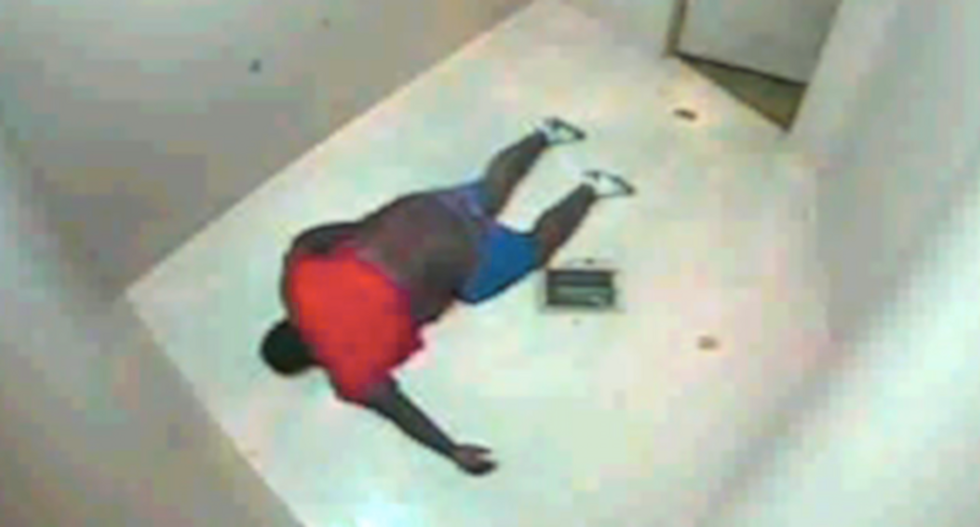 A newly released video – which contradicts police reports – shows a black Louisiana man lying facedown and unresponsive in a jail cell where he died after officers shocked him with a stun gun.

Sheriff’s deputies were called Nov. 26, 2013, to a Port Allen gas station, where 38-year-old Ervin Leon Edwards and his girlfriend were arguing, reported The Advocate.

The couple had calmed down by the time deputies arrived, but they questioned Edwards about his “sagging” pants – which are banned in the city – and then arrested him.

Police said Edwards was combative after he was placed in handcuffs and threatened to kill officers, and an officer threatened to use a stun gun to subdue him.

Edwards’ girlfriend begged officers not to use a stun gun, telling them Edwards suffered from high blood pressure, according to a wrongful death lawsuit filed last year by the man’s family.

Officers did not use the stun gun against Edwards at the gas station, but a Port Allen police officer eventually shocked him inside the West Baton Rouge Jail cell.

Officer Dustin McMullan, of Port Arthur police, said he used the stun gun for its full five-second cycle but re-holstered the weapon because it did not appear to have any effect on Edwards, the newspaper reported.

McMullan claimed in an incident report that he helped other officers use “empty hand control techniques” to remove the restraints from Edwards’ ankles and hands before leaving the cell.

The incident report also claims a deputy checked on Edwards after he was left alone in the cell and found him breathing and moving his arms.

However, the video directly contradicts the officer’s claims.

The grainy video footage does not clearly show how many times Edwards was shocked, but it shows McMullan kept the stun gun pressed against the inmate’s buttocks in “stun drive” mode for more than a minute.

Edwards stopped moving a short time later and never budged afterward, and the video shows officers left him alone in the cell for about 10 minutes without examining him.

Officers occasionally peeked through a window in the cell door but did not render any medical assistance to Edwards as he lay unconscious on the floor – which law enforcement experts said violated corrections standards.

An internal review of the incident found no criminal wrongdoing, but the West Baton Rouge Parish Sheriff’s Office has turned over its findings to the U.S. Department of Justice for examination.

Edwards’ cause of death was classified as “undetermined” and officially a result of “acute cocaine and phencyclidine (PCP) intoxication in association with restraint by law enforcement,” according to the autopsy report.

Law enforcement experts said Edwards – who was described in the autopsy report as morbidly obese – likely died as a result of “excited delirium,” a controversial diagnosis to describe in-custody deaths involving drug intoxication, struggles with police, and the suspect’s health.

“The drugs didn’t kill him,” said his mother, Viney Edwards. “The police killed him.”

Watch the video posted online by The Advocate: