WATCH: A ‘homeless’ guy offers money to people walking by — and their reactions will shock you 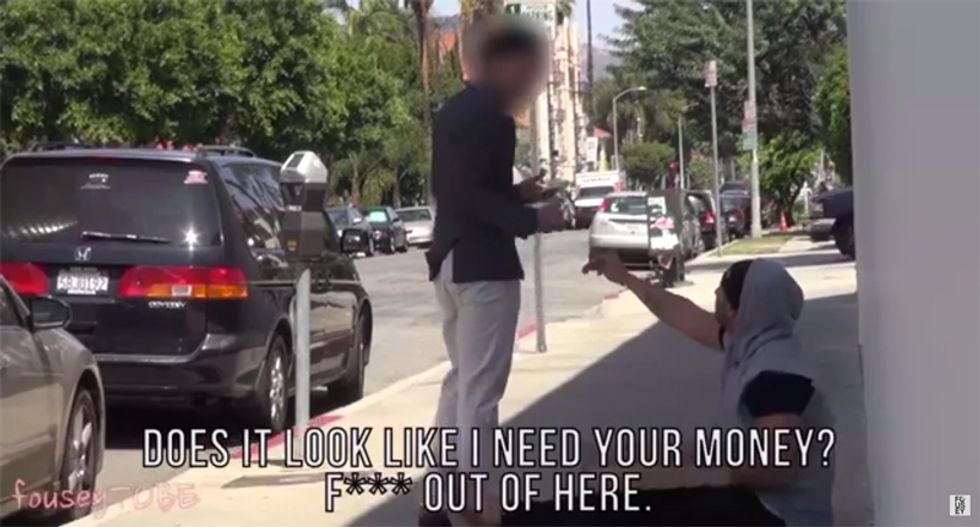 A video capturing people's reactions when they were offered money by a seemingly homeless man in the streets of Los Angeles went viral on YouTube.

In the video made by "fouseyTUBE," a man who appears to be homeless holds a sign that reads "No One Has Ever Become Poor From Giving" and offers cash to random passersby in the streets of LA. The responses he received were shocking.

"In today's society, it's socially acceptable for the wealthy to give money to the homeless. Is it acceptable because it's one individual helping another? Or because one individual is better than the other, so it's okay to help?" the man asks on camera.

Sitting on a sidewalk or walking up to people, he offers money to the unsuspecting.

"I just want to be a helping hand today. God bless," he says.

The people he approaches, many of whom are in suits, appear to assume that the man is asking for money. When they realize that he's offering money, many of them react with animosity.

Only a pair of people -- a man and a woman -- give money back to him and say positive things.

"Just because it's a good message man. So positive," the man says when he hands some cash to the actor.

The woman crouches down when she gives him money "for breakfast."

The project was an experiment to see "how people feel about themselves when someone classified as 'lesser' than them on societies class ladder offers them money," according to a statement on YouTube.