WATCH: Woman fights with police after stealing American flag from protesters who were 'desecrating' it 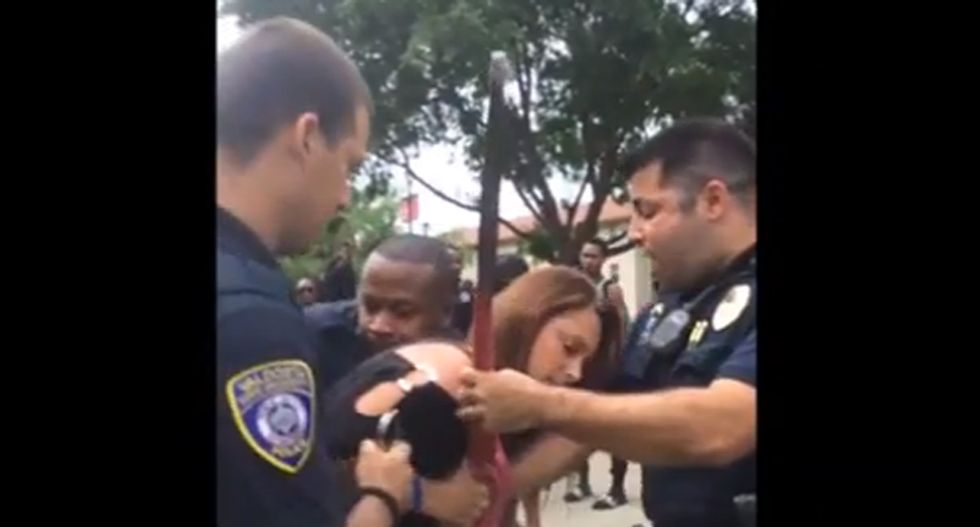 A Georgia woman was briefly detained by Valdosta State campus police after resisting arrest when they attempted to take her into custody for stealing an American flag she claims protestors were "desecrating."

According to the Valdosta Daily Times,  Air Force veteran Michelle Manhart went to Valdosta State campus after hearing protestors were walking on an American flag.

“I did not want anything like this, but I got a call from a student who told me that the flag was on the ground, and they were walking on it,” said Manhart. “I was just going over there to pick up the flag off the ground. I don’t know what their cause is, but I went to pick it up because it doesn’t deserve to be on the ground.”

After campus police attempted to intervene when the confrontation between Manhart and the student protesters grew heated.

In the video, an officer can be seen talking to the woman as  tries to pull flag from her hands as another officer steps in and attempts to handcuff her when she resists.

Manhart then places her free hand between her legs while insistently asking officers why they're not arresting anyone else.

As protesters surround the struggling police and woman, pointing out that she is resisting arrest, police wrestle her to the ground where she is finally subdued.

On her Facebook page, Manhart complained that the campus police had refused to take action for several days against the protestors, writing, "So we decided to get the flag and give it the respect it deserved...We just wanted to remove it and dispose of it properly...The American flag represents our Freedom why would you want to walk on that???"

Manhart was later released after the student group that was holding the protest declined to press charge charges for theft.

Watch the video below, uploaded top YouTube by ReformedMediadotNet: