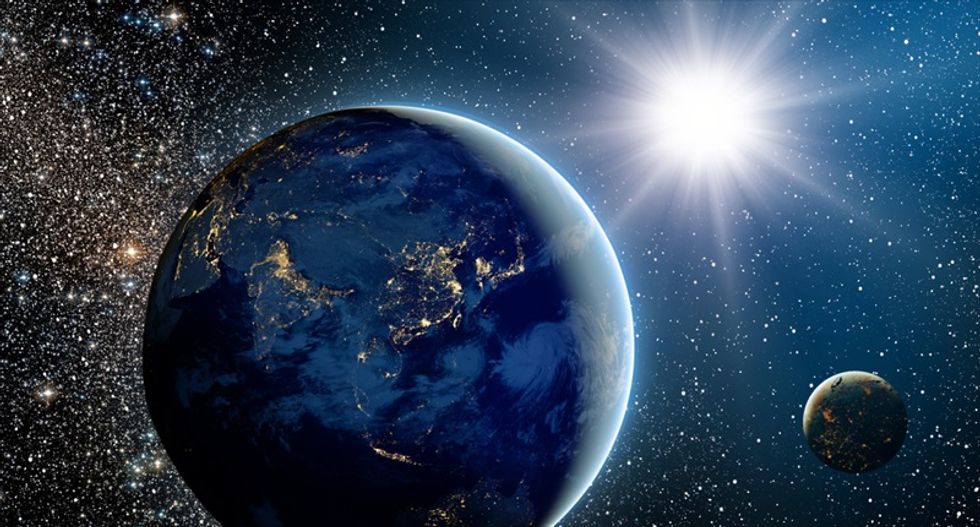 Galaxy EGS-zs8-1 has moved 30bn light-years away from Earth since it was born: ‘We’re actually looking back through 95% of all time to see this galaxy’

A team of astronomers has measured a galaxy farther than any other ever seen by human beings, reporting this week that the ancient star system offers a glimpse of what the universe was like not all that long after the beginning of time.

Astronomers from Yale University and the University of California Santa Cruz announced in the Astrophysical Journal that they had identified a galaxy that formed about 13.1bn years ago, making it the earliest measured galaxy known in the 13.8bn-year history of the universe since the big bang.

The newly measured galaxy, given the unromantic moniker EGS-zs8-1, now holds the record for distance: because the universe has continued to expand since its original existential spasm, early galaxies moved farther and farther outward over the millennia, eventually putting EGS-zs8-1 an estimated 30bn light-years away from Earth.

But because light can only travel so fast through the vast distances of space, what reaches Earth is actually old light – the sight of what the sun looked like a few minutes ago rather than what it looks like at that moment.

Light reflected off the moon takes 1.3 seconds to reach Earth, sunlight takes eight minutes and light from a distant galaxy takes billions of years. The effect, through powerful telescopes like the Hubble, is of looking into eons past.

So what we see in EGS-zs8-1 is happening a long time ago, in a galaxy far, far away.

“We’re actually looking back through 95% of all time to see this galaxy,” Garth Illingworth, an astronomer at the University of California Santa Cruz and co-author of the paper, told the Los Angeles Times. “It’s really a galaxy in its infancy,” he added, “when the universe was in its infancy.”

Astronomers can therefore see these ancient, distant galaxies as when they were “young” and in an early form. EGS-zs8-1 is unusually large and bright among the known early, distant galaxies, already about one-sixth the mass of the Milky Way – about 8bn suns – and creating stars 80 times faster than our galaxy, the researchers found.

“While we saw the galaxy as it was 13bn years ago, it had already built more than 15% of the mass of our own Milky Way today,” Yale researcher Pascal Oesch, the lead author of the paper, said in a statement. Oesch suggested that the research would help illustrate some of the earliest epochs of the cosmos: “The universe was still very young then.”

“By looking at different galaxies as a function of time, we can reconstruct the build-up of the heavy elements that we see around us today and that we’re all made of,” Oesch said. He added that the data gave clues as to “how the stars were forming at these extreme distances, and they seem to be forming differently than the local universe. Every discovery opens up a whole new set of questions.”

Both Oesch and Illingworth said that the Hubble appears to show many more light sources and likely galaxies even farther away, but that they cannot yet measure their distance. With more data about more distant galaxies, researchers hope to gain insight into how galaxies formed, and so quickly, after the big bang.

Scientists have raced in recent years to discover ever more distant and older galaxies, in paradoxical pursuit of clues to the early universe. Astronomers try to measure distance by seeing how starlight stretches, or “redshifts”, from the ultraviolet levels of high-energy light down to what’s visible to the eye, and then farther down to infrared levels. As the universe expands at an accelerating clip, the light stretches along longer wavelengths and becomes “redder”.

To measure the distance of this galaxy, the Yale and UC Santa Cruz team used a spectrograph called Mosfire mounted on a specialized telescope – itself mounted on the dormant volcano of Mauna Kea on Hawaii. Nasa plans to launch a new super telescope, the James Webb Space Telescope, to join the ageing Hubble in orbit, and also to add a gigantic Thirty Meter Telescope to the observatory complex in Hawaii.