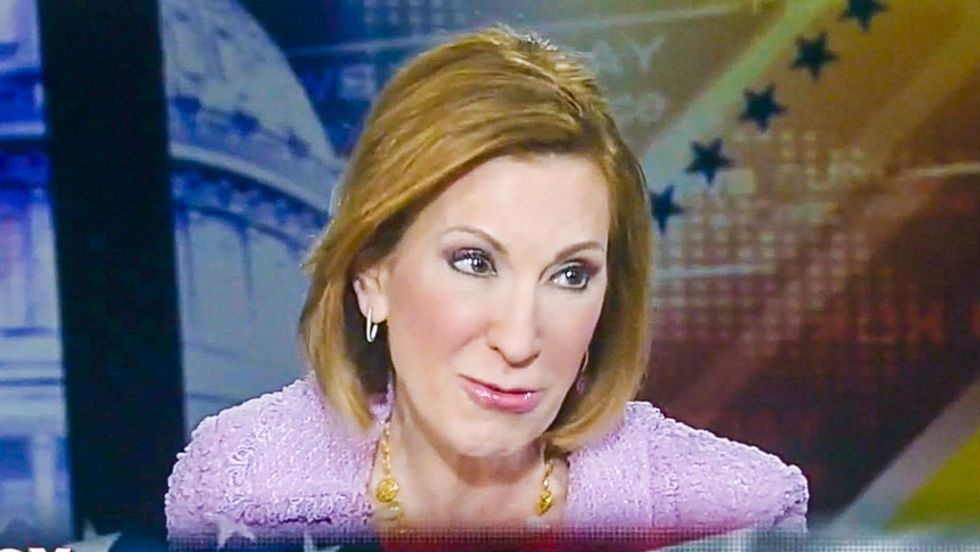 GOP presidential hopeful Carly Fiorina on Saturday accused Hillary Clinton of poor performance as Secretary of State, saying her meetings with world leaders were only "photo-ops," The Hill reports.

The former CEO of Hewlett-Packard launched a series of attacks on the Democratic presidential candidate, her recent favorite target, during the Southern Republican Leadership Conference in Oklahoma City.

"I know more world leaders than anyone else on this national stage with the possible exception of Hillary Clinton," Fiorina said to the crowd. "And unlike Hillary Clinton, I wasn't there for photo-ops."

Fiorina criticized Clinton for the lack of leadership in representing the interest of the U.S. in international affairs.

"The world is a dangerous and tragic place when America is not leading," she said. "Nowhere is leadership more important now than in the world."

She attacked Clinton for being too soft on Russia, saying that she would take a hard line on Moscow.

Her measures against Putin's aggression would include increasing military support to Ukraine, helping the Baltic states conduct military exercises, fostering missile defense and expanding the Navy's Sixth Fleet in Europe.

"Vladimir Putin would get the message," she said.

Fiorina also argued that Clinton was unfit for president because of her similarities to President Obama.

She criticized President Obama's handling of foreign relations. She said that the president's negotiation with Iran "has violated every rule of good negotiation," which lead to a closely missed "terrible deal."

Accusing Clinton of being unaccountable, Fiorina said she had been keeping her earlier vow of making herself more accessible by the public than the Democrat candidate.

"Since I launched my campaign for the presidency less than three weeks ago, I have answered about 413 questions from the press, and yes, I am counting," she said. "Hillary Clinton, I think, has answered 13 questions now since April 12."

"We know that Hillary Clinton will not be held to account unless we have a nominee that holds her to account in the general election," she added.