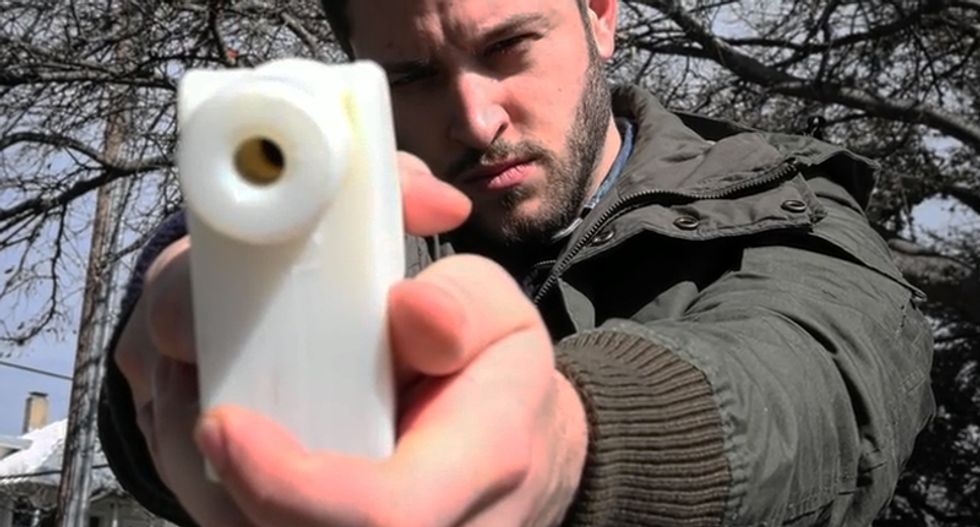 In a battle that encompasses both the 1st and 2nd Amendments of the Constitution, the creator of the world's first 3D-printable gun has filed suit against the U.S. government for the right to post blueprints for the weapon online where it can be shared.

According to Wired, Cody Wilson, inventor of The Liberator handgun, filed a 25-page lawsuit in an Austin federal district courthouse accusing the State Department of “prior restraint,” stating that the federal agency is censoring his right to free expression.

Two years ago, Wilson uploaded the plans on his website Defense Distributed, where they were downloaded over 100,000 times before he was ordered to take them down by the State Department.

According to the State Department Wilson was in violation of the International Traffic in Arms Regulations, designed to prevent “sensitive” military hardware and weapons technology from being transferred overseas. According to Wilson's attorney, the department was supposed to make a determination as to whether the dissemination of the information was truly in violation of the law within sixty days, but two years have passed, leading to the lawsuit.

“After Sandy Hook, the government decided that it wanted to stop this,” Matthew Goldstein, one of Wilson’s lawyers, told the New York Times. “But there were no laws that allowed them to do so within the Constitution. So they reached into their bag of tricks and suddenly pulled out ITAR.”

According to Wilson, while the gun may be controversial, the plans he wants to share online for it are "speech" and therefore is protected by the 1st Amendment.

“If code is speech, the constitutional contradictions are evident…So what if this code is a gun?” Wilson explained. “Nothing can possibly stand in the way of this being disseminated to the people, and yet they insist on maintaining the power to do so.”

Should it be granted, Wilson plans to publish a file of gun blueprints developed by his company over the last two years before his case is heard by a federal judge.

Watch an interview with Cody Wilson, uploaded to YouTube by ReasonTV: