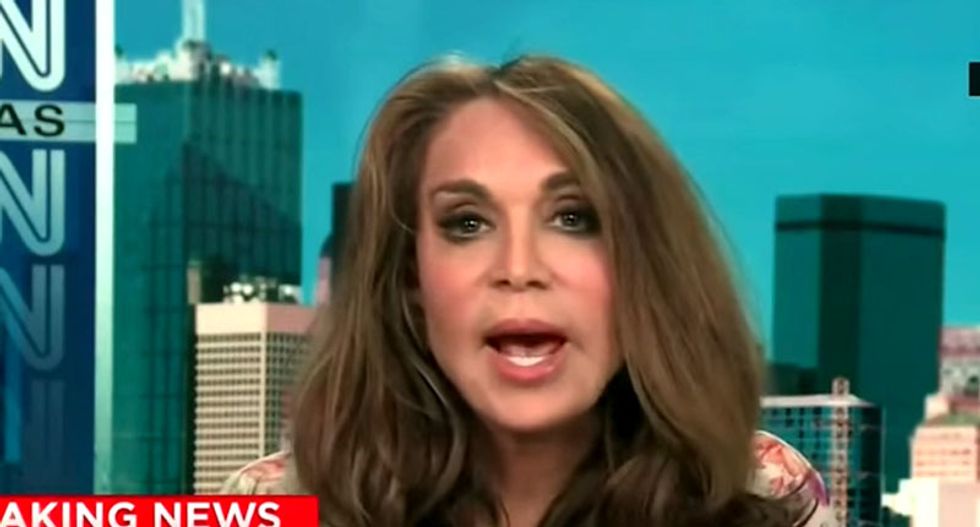 Pamela Geller got into a combative debate with CNN host Alisyn Camerota on Monday after being accused of "incendiary and provocative" anti-Islam activism.

The discussion came just hours after two men were shot and killed by police after opening fire on an event hosted by Geller's American Freedom Defense Initiative. The group had offered a $10,000 prize to draw a cartoon of the Prophet Mohammed.

"I haven't heard anyone in the media saying that it's okay for gunmen to show up at an event like this. But what people are saying is that there's always this fine line, you know, between freedom of speech and being intentionally incendiary and provocative," Camerota remarked.

"Intentionally incendiary and provocative by drawing a cartoon," Geller shot back. "This is the low state of freedom of speech in this country. I disagree, and I disagree most vehemently. The First Amendment, not the Eighth, not the 10th, but the Dirst, protects all speech, not just ideas that we like. But even core political speech, ideas that we don't like, because who would decide what's good and what's forbidden? The Islamic state? The government?"

"When Jesus Christ was put in a jar of urine it was called art," she added. "Did Christians like it? Of course not. Did they slaughter people? Did they burn embassies? Did they kill whole communities? Of course not. This cannot be sanctioned. This cannot be sanctioned. The West must stand up for freedom of speech. It's the core, fundamental element of this constitutional republic."

Geller, who is also the leader of the group Stop Islamization of America, accused her critics of being "Islamophobic."

"We have to be able to discuss and when you say I'm anti-Muslim. Excuse me, I'm anti-jihad. And anyone that says that I'm anti-Muslim is implying that all Muslims support jihad," she explained.

Camerota told Geller she was viewed as anti-Muslim because she believed Muslims were inherently violent.

"The bottom line is that -- freedom of speech can never be met with violence," Camerota said. "No one can ever open fire on a group of innocent people. I mean obviously that is from the get-go, that's where you and I and everybody in this country agrees. But there is a debate to be had about what the line is between freedom of speech and provocation. The point is -- isn't that you don't have the right to do it. Of course you have the right to do it. It just seems that you don't draw the distinction between extremism and violence and Islam as a whole."

"And you don't draw the distinction between civilized men and savages," Geller replied, "because you're saying that if something I say offends someone, then they have the right to behave in a certain way; that it's going to incite them. I think it's ridiculous. I think the blasphemy laws under the Sharia is ridiculous. I think the people that tens of thousands of people that are slaughtered under this law is monstrous. And that's what you and I should be addressing."

After arguing over whether Geller had described Islam as a religion of savages, Camerota told Geller the event "wasn't just about the violence."

"My event was about freedom of speech, period," Geller said. "Freedom of speech is the First Amendment. It's the first and most protected political speech -- the most protected because who would decide what's good and what's forbidden? These arbitrary voices? You? The Muslim Brotherhood?"

"We need to have this conversation, and the fact that we have to spend upwards of $50,000 in security speaks to how dangerous and how in trouble freedom of speech is in this country. And then we have to get on these new shows and somehow we are -- those that are targeted, those that were going to be slaughtered are the ones who get attacked speaks to how morally inverted this conversation is."