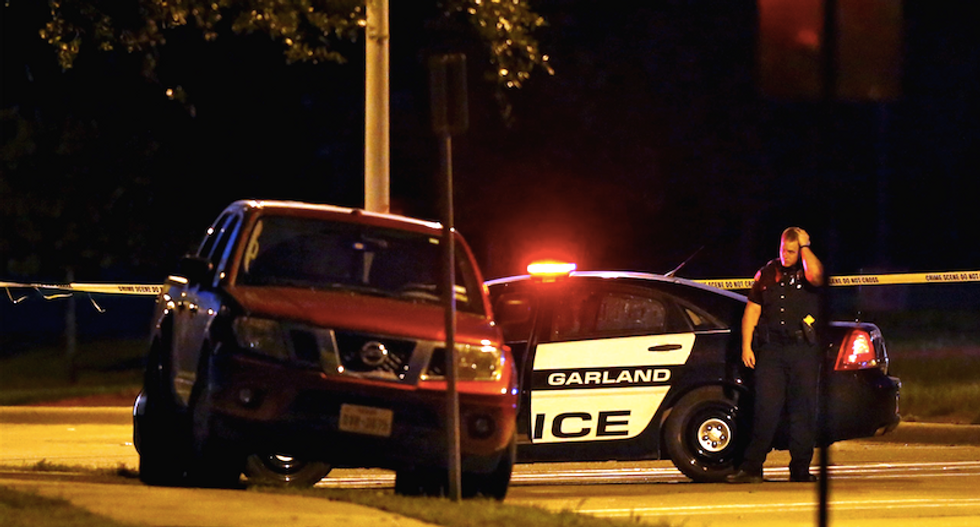 A police officer stands near the suspects' vehicle after a shooting outside the Muhammad Art Exhibit and Contest sponsored by the American Freedom Defense Initiative in Garland, Texas May 3, 2015. (REUTERS/Mike Stone)

Texas police shot dead two gunmen who opened fire on Sunday outside an exhibit of caricatures of the Prophet Mohammad that was organized by an anti-Islamic group and billed as a free-speech event.

The shooting in a Dallas suburb was an echo of past attacks or threats in other Western countries against art depicting the Prophet Mohammad. In January, gunmen killed 12 people in the Paris offices of French satirical magazine Charlie Hebdo in revenge for its cartoons.

Sunday's attack took place at about 7 p.m. in a parking lot of the Curtis Culwell Center, an indoor arena in Garland, northeast of Dallas. Geert Wilders, a polarizing Dutch politician and anti-Islamic campaigner who is on an al Qaeda hit list, was among the speakers at the event.

Police said they had not determined the identity of the two gunmen or whether they were linked to critics of the event who had branded it anti-Islamic.

As a precaution, a police bomb squad was checking the suspects' car, and the immediate vicinity of the Culwell Center was evacuated, city police spokesman Joe Harn said. Investigators were keeping their distance from the bodies of the gunmen, which were close to the car, until the vehicle was deemed clear of explosives, he said later.

Shortly before midnight police alerted media that a strong electronic pulse would be activated near the scene, presumably as part of the bomb squad's work, and a loud boom was heard moments later, though police did not comment further on what was done.

The exhibit was organized by Pamela Geller, president of the American Freedom Defense Initiative (AFDI). Her organization, which is described by the Southern Poverty Law Center as a hate group, has sponsored anti-Islamic advertising campaigns in transit systems across the country.

Organizers of the "Muhammad Art Exhibit and Contest" said the event was to promote freedom of expression. They offered a $10,000 prize for the best artwork or cartoon depicting the Prophet, as well as a $2,500 "People's Choice Award."

Depictions of the Prophet Mohammad are viewed as offensive in Islam, and Western art that portrays the Prophet has sometimes angered Muslims and provoked threats and attacks from radicals.

In Sunday's incident, the two suspects drove up to the building as the event was ending, and opened fire with automatic rifles at an unarmed security officer, striking him in the leg, police and city officials said.

One of the suspects, after being initially wounded by police gunfire, was seen reaching for a backpack and was shot again and killed, Garland Mayor Douglas Athas later told CNN.

The security officer was treated at a local hospital and later released, Harn said. No one else was injured.

Most of the 200 people attending the event were still inside the arena when the violence unfolded and were unaware of what had happened until police came into the building and told everyone to stay inside because of a shooting.

The mayor said the city had permitted the event even though officials knew its inflammatory theme could provoke an attack.

"There was concern, which is why we had heightened security in the area, but we all swear to uphold the Constitution: free speech, free assembly and in this case perhaps, free religion," Athas said. "So in this case they were free to use the building."

He said the school district that owns the building had posted extra security officers at the venue, and the city of Garland also had a number of security and SWAT (special weapons and tactics) teams in the area.

Geller, who is known for her stance on Islam, said on Fox News she chose the Garland venue for the art exhibit because it was where American Muslim leaders held a conference on combating Islamophobia a week after the Charlie Hebdo attacks.

In 2010, she led a march to the site of a proposed Islamic center near the site of the destroyed World Trade Center.

The AFDI issued a statement on Facebook after the shooting saying, "This is war on free speech. What are we going to do? Are we going to surrender to these monsters?"

In his speech at the event, shown in a video clip posted on the AFDI’s website, Dutch politician Wilders offered his rationale for supporting the cartoon contest, saying depicting the Prophet and violating one of Islam’s greatest taboos was a liberating act.

"Our message today is very simple: we will never allow barbarism, never allow Islam, to rob us of our freedom of speech," Wilders said.

The Charlie Hebdo attack was followed by another a month later in Europe. A masked gunman sprayed bullets into a Copenhagen meeting in February attended by a Swedish artist who had been threatened with death for his cartoons of the Prophet Mohammad. A civilian was killed and three police officers were injured in the attack, aimed at artist Lars Vilks, who stirred controversy in 2007 with published drawings depicting the Prophet Mohammad as a dog.

Denmark itself became a target 10 years ago after the publication of cartoons lampooning the Prophet Mohammad. The images led to sometimes fatal protests in the Muslim world.