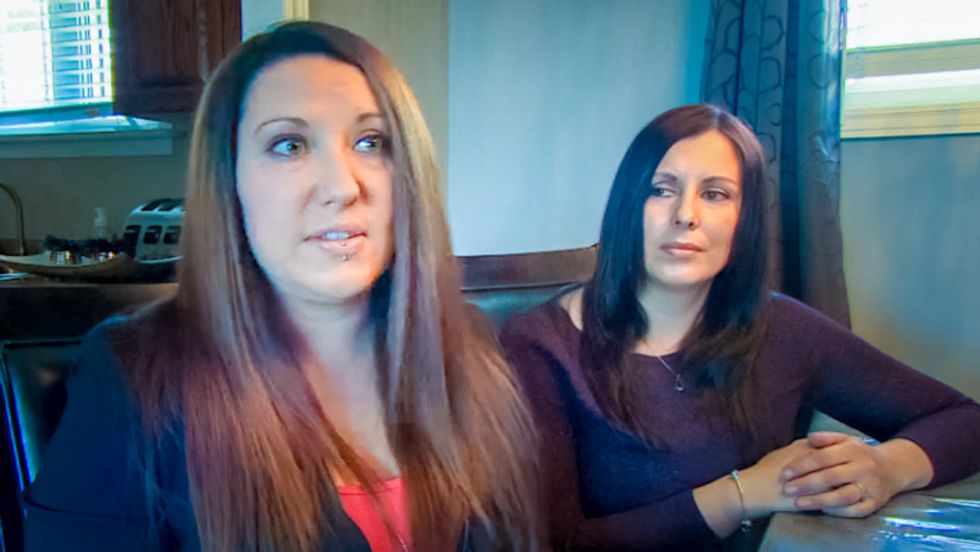 A same-sex Canadian couple said this week that a jeweler in Newfoundland put up signs opposing gay marriage after they ordered their wedding rings, and then refused to give them a refund.

"They were great to work with," White recalled. "They seemed to have no issues. They knew the two of us were a same-sex couple."

She said that she later referred some of her friends to the jeweler, who informed the couple that the store had begun displaying anti-gay signs after the wedding ring order had been placed. "The sanctity of marriage is under attack," one sign warned.

"I had no idea about the sign up until that point," White explained. "It was really upsetting. Really sad, because we already had money down on [the rings], and they're displaying how much they are against gays, and how they think marriage should be between a man and a woman."

White confronted a store employee, who asserted that they could "put up whatever they want" because of their religious beliefs.

White and Renouf said that they felt like the rings, which were meant to be a symbol of love, had been tainted by the store's anti-gay beliefs. So, they asked for their money back.

But Today's Jewellers co-owner Esau Jardon insisted to CBC that he was not going to be bullied into giving the women a refund.

"I have been posting different aspects of my religious beliefs the last 11 years, and I've never had one single problem with any of my customers," he said. "Nothing in that shop or in these posters is against the law... There's nothing there that means to discriminate or to hate anybody else."

"When I walk on Church Street in Toronto, where I am right now, and I see [LGBT rainbow flags], and I see a lot of signs and a lot of things on public property, I don't have a problem with them. I accept it," he added. "I don't discriminate against that, nor do I come and tell them to take them down. For the same reason, I ask to have the same respect in return, especially when it's in my own business."

Jardon argued that only bullies had forced him to shut down his Facebook page after news about his anti-marriage signs got out.

"I had to shut down the Facebook page because of so many hate emails and phone calls and just, really nasty stuff," he said.

As for the refund, Jardon said that he did not work for free. The rings are finished are he's expecting White and Renouf to pick them up and pay their balance.