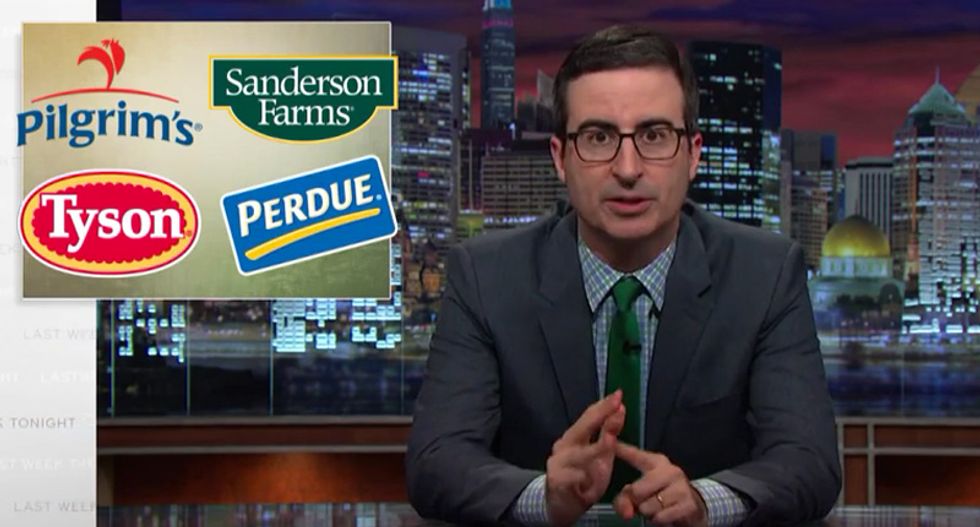 Americas eat 160 million chickens per week and are such a common part of the Americans diet that the chicken has become the reference point for how other meats taste, as Oliver showed with clips from television programs where the taste of bugs, alligator and armadillos are all compared to chicken.

While the public is aware of the terrible conditions chickens are kept on factory farms, most are unaware that the big four poultry corporations - Tyson, Pilgrim's, Sanderson Farms, and Perdue -- keep contract chicken farmers at poverty level income while also keeping them in constant fear of losing their livelihood.

Defending  "Big Poultry" corporate practices, Tom Super, a spokesman for the National Chicken Council smugly explained, "Which poverty line are you referring to? Is that the national poverty line? Is that a state poverty line? The poverty line in Mississippi and Alabama is different than it is in New York City."

"What the f*ck are you talking about?" Oliver asked. "It doesn't matter. The poverty line is like the age of consent: if you find yourself parsing exactly where it is, it you’ve probably already done something very, very wrong.”

Farmers explain that, while they own the chicken farm infrastructure which puts them increasingly in debt as the corporations demand upgrades, those same corporations own the chickens which are delivered to the farmers as baby chicks and picked up later for processing when they are fattened up.

Representatives for those corporations then grade the quality of the chickens, using arbitrary levels that can substantially affect what the chicken farmers are paid.

"Holy sh*t. When controlling *ssholes threaten their dependents with numerically inferior chicks, That's not a responsible business model, that is [HBO's] Entourage. That is what that is... I can't wait for the movie. The boys are back. The boys are back," Oliver said as HBO flashed a promo beneath him for the upcoming film.

While Congress has passed a regulations protecting the farmers from predatory corporate practices, the government has refused to allow the laws to be enforced by annually suspending them, mostly at the behest of Rep. Steve Womack (R-AR), whose district includes Tyson.

With another vote coming up that would allow the protections to finally be applied, Oliver suggested a prank to call out lawmakers on the controlling committee vote. If any of the 51 members vote against the interests of the farmers — Oliver asked viewers to clutter their Wikipedia pages with accusations of being a “chickenf*cker” faster than Wiki editors can take them down.