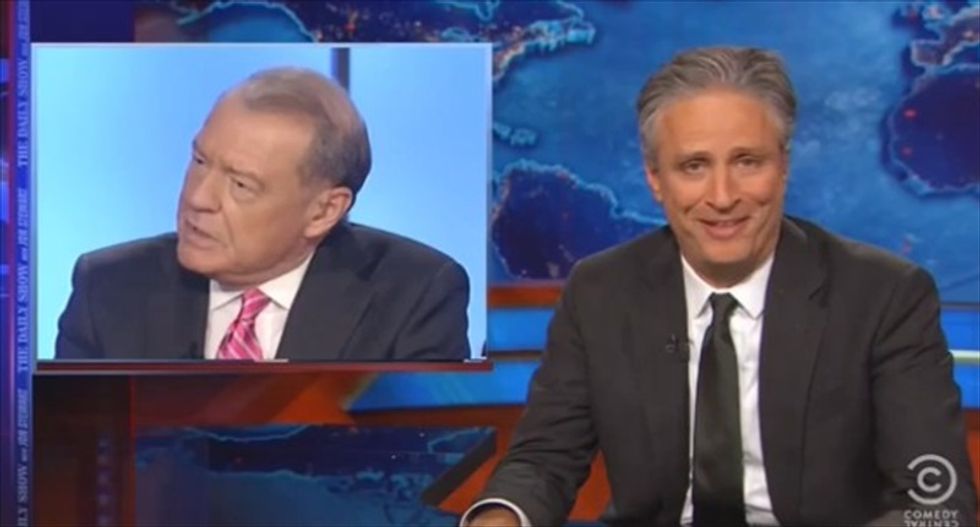 Daily Show host Jon Stewart caught Fox Business' Stuart Varney in a lie on Wednesday, showing footage undermining Varney's claim that neither he nor his network were out to insult the poor.

"How f*cking removed from reality is Fox's perception of their own coverage on poverty? The main defender of your network's attitude towards those in poverty is the main offender," Stewart said "He does segments that would make Ebenezer Scrooge go, 'Hey, take it easy, these are people we're talking about.'"

Stewart played a montage of footage dating back to 2011 in which Varney uses phrases like "handout nation" to describe the poor, or saying they lack a "richness of spirit." Most damningly, Varney openly says in a June 2013 clip, "I am being mean to poor people."

After that, Stewart said, Varney's claim earlier this week -- that he and Fox News were only looking at social-service programs as a whole and not demonizing participants -- was "a rich buffet of bullsh*t out of a three-course prickfest."

"Are these glaring contradictions a product of lack of self-awareness, or cynicism, or stupidity, or evil?" Stewart asked. "I don't know anymore, and I'm starting to lack a richness of f*cks."

The conservative network rushed to defend itself, Stewart noted, after President Barack Obama called them out during an event at Georgetown University on Tuesday, while ignoring the fact that Obama engaged in the sort of free-ranging discussion on the issue that Fox complained he was ignoring.

"Just like students at a 4-hour commencement, Fox basically pays not attention until they hear their own names," the host said, adding, "It sounds to me like the president has a remarkably firm grasp on your business model there, Fox."