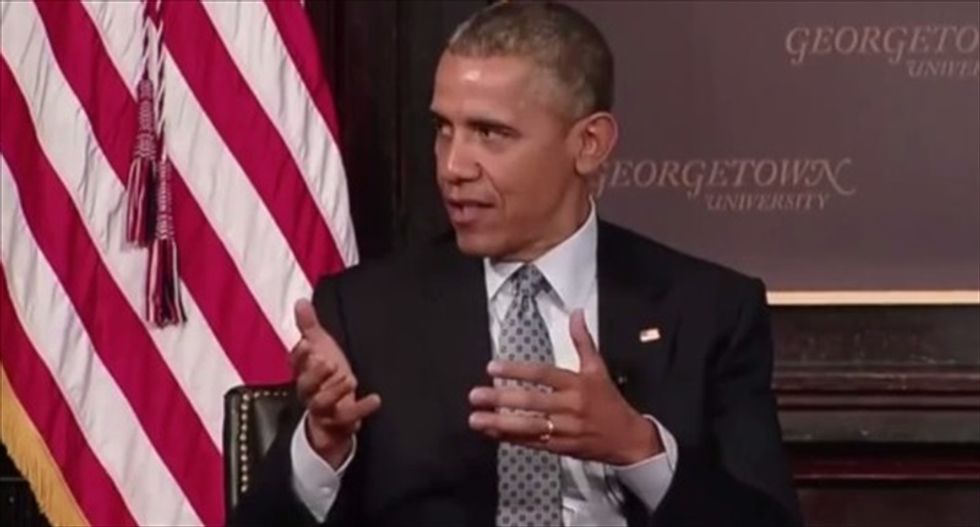 President Barack Obama criticizes Fox News during an event at Georgetown University on May 12, 2015. [Media Matters]

President Barack Obama ripped Fox News during an event focusing on fighting poverty on Tuesday, accusing the conservative network of spreading stereotypes about the poor to attack him, Media Matters reported.

"I think the effort to suggest that the poor are sponges, leeches, don't want to work, are lazy, are undeserving, got traction," he said during an appearance at Georgetown University, adding, "I have to say that if you watch FOX News on a regular basis, it is a constant menu. They will find folks who make me mad. I don't even know where they find them. 'I don't want to work, I just want a free Obamaphone or whatever.'"

Fox's narrative, he said, is part of a broader political argument to make middle-class voters "mad at folks on the bottom" for feeling like they struggle to get ahead.

"Very rarely do you hear an interview of a waitress, which is much more typical who is raising a couple of kids and doing everything right but still can't pay the bills," the president argued.

The network has long come under criticism, as well as ridicule, for arguing that poverty is caused by a person's "lack of virtue," while often attacking social-service programs by harping on their food options.

Watch Obama's remarks, as posted on Tuesday by Media Matters, below.