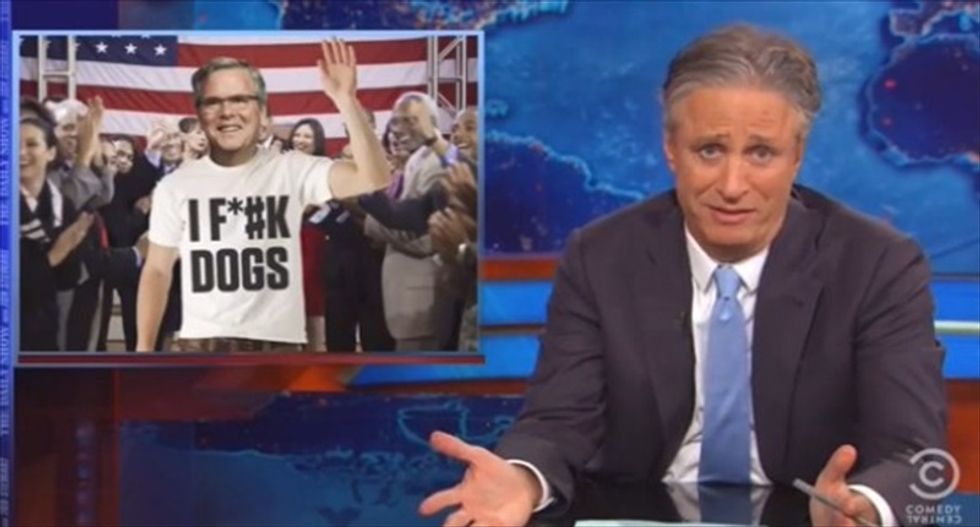 Daily Show host Jon Stewart was surprised and amused on Tuesday that former Florida Gov. Jeb Bush was apparently trying to link himself to his ex-president brother's legacy by calling him a "trusted foreign policy advisor."

"There's gotta be a final clause in that sentence, right?" Stewart asked. "Because at this point, I think most of America agrees that when it comes to foreign policy, George W. Bush is an excellent painter."

The younger Bush was raked over the coals after telling Fox News that like his brother, he would have invaded Iraq.

While the prospective 2016 presidential candidate later allegedly claimed to have "misheard" the question, Stewart agreed with CNN analysts in saying that invoking the Bush administration as proof of his bonafides was a bad long-term strategy for Jeb.

"Long-term, mentioning his brother’s name is like wearing an 'I F*ck Dogs' T-shirt during your campaign," Stewart said. "You might be appealing to a small fringe of dead-enders, but most people don’t want another dog-fucker for president."

Stewart also hammered former Arkansas Gov. Mike Huckabee for trying to spin his stint as a pitchman for medically-questionable "diabetes reversal kits" as a type of medical advocacy that really signaled he would make a good president.

"Basically he's saying, 'If the worst thing you can say about me is I leveraged my reputation as an elected official to sell a specious cure to enrich myself from those suffering with a debilitating disease, then ... yeah, that's pretty f*cking bad,'" Stewart explained.