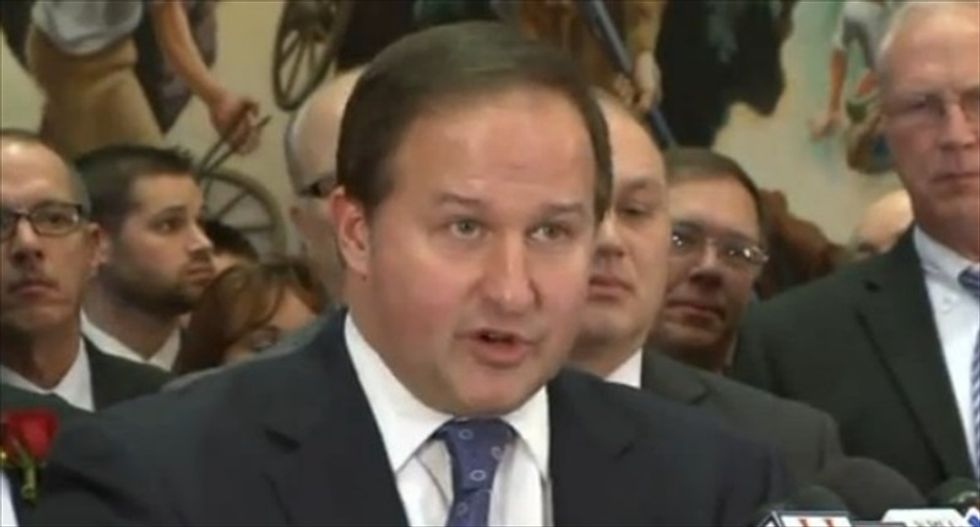 The newly-elected Republican House Speaker for Missouri faced calls for his job after the publication of messages allegedly showing his "sexually charged relationship" with an 18-year-old college freshman interning for him, KTVI-TV reported on Wednesday.

"I take full responsibility for my actions and am truly sorry to those I let down," state Rep. John Diehl said in a statement. "I apologize for the poor judgment I displayed that put me and those closest to me in this situation."

The Kansas City Star published the purported text exchanges between Diehl, who is married, and the woman, a student at Missouri Southern State University.

One exchange takes place after the intern sent the congressman a picture of herself wearing a bikini.

"Laying in bed looking at your pic," he writes, to which she responds, "Mmmmm why can't I be there."

Later he tells her, "I am so distracted right now," then, "You would be in trouble if you were here."

Screenshots of the messages quickly circulated online, as seen below:

The Star reported that Diehl backed out of a planned May 1 interview, before producing a set of six text messages through his office he said showed no "significant" exchanges with the intern. However, the newspaper cited multiple sources confirming that Diehl used his business phone to communicate with the intern.

An attorney hired by the unidentified woman said the messages published by the Star were not real. But she has also allegedly told friends she was in the midst of a relationship with Diehl.

Her attorney said in a statement that she "requests the media respect her privacy. She has provided all the information she intends to give on the matter, and will be issuing no further comment. [She] is not interested in being at the center of any political debate concerning her internship or the workings of the state Capitol."

The revelation of the messages follows the university's sudden decision to end its internship program at the Missouri state Capitol. Richard Miller, who leads the college's school of arts and sciences, cited "an unspecified incident" as the impetus for pulling four interns out of their assignments there.

Missouri Daily News reported that state Democrats are gathering signatures for a motion to recall Diehl if he does not vacate his position. However, Diehl said late Wednesday night that he intends to continue serving as House Speaker.

A picture of the petition, as posted online, can be seen below:

Watch KTVI's report, as aired on Wednesday, below.