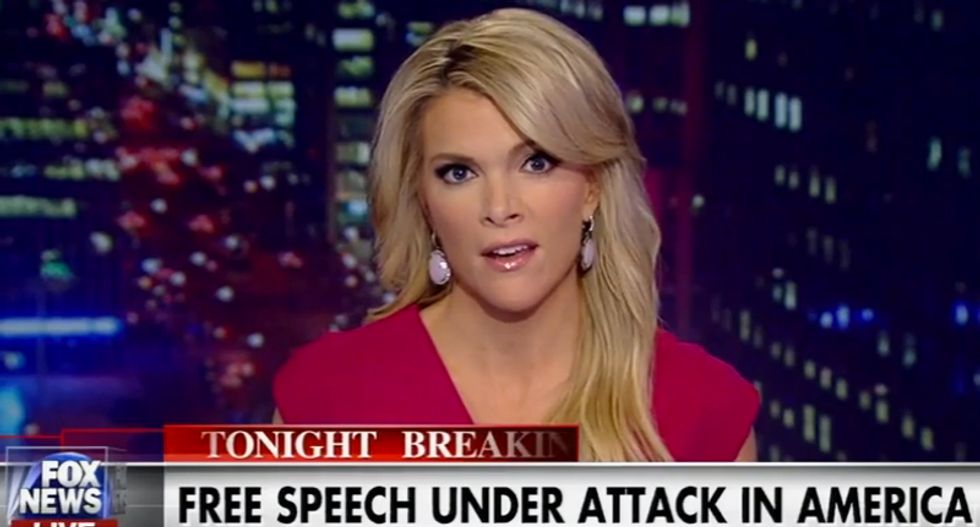 Megyn Kelly- "You're either with Pam Geller of you're a terrorist. It's that simple."

In a sneery snarling fangs-bared lip-curled blood-shooting-from-the-eyes performance the likes of which we haven't seen since Andrea Tantaros was forced to speak to a non-white person, Megyn Kelly of Fox News said that anyone who isn't praising hate-harpy Pam Geller for teaching us the true meaning of freedom of speech might as well be a goddam terrorist.

And I am not overstating this.

According to Kelly, Geller and her American Freedom Defense Initiative hate group worked very hard to give the lovely people in Texas a private event where they could do freedom things like draw funny pictures of the Prophet Muhammad. That is because freedom's just another word for the right to be a mouth-breathing moronic asshole with nothing better to do but draw racist cartoons in the company of other mouth-breathing moronic assholes -- as was promised in the Federalist Papers.

I mean, it doesn't say that in so many words, but that's the general idea if you read between the lines.

"They were trying to make a point about intolerance by some in the Muslim world," Kelly snarled as she hated the entire world for forcing her to explain this to everyone because they're so damned stupid and not smart and pretty like her. "And about principles on which the USA is supposed to stand firm. Namely that, no matter how abhorrent one might find another's words, in this country we defend their right to say them."

Without even a hint of self-awareness, Kelly then proceeded to criticize other people for expressing opinions about Geller that she didn't agree with because -- while in this country we defend their right to say them --  Megyn Kelly is not about to let you guys get away with speech she finds objectionable, First Amendment be damned.

Megyn Kelley would also like you to know that if we dare question Geller's motives -- for example pointing out that she is a lunatic who could care less if innocent bystanders get killed as along as a few Muslims die in the process -- well then, “if this is where American sentiment stands on this, then the jihadis are officially winning.”

To prove her point and to expose the jihadi-lovers who are destroying America with their words, Kelly shared clips of CNN, MSNBC, and NBC hosts complaining that Geller was playing a dangerous game with other people 's lives and is using the ideas behind absolute freedom of speech as cover for her genocidal tendencies.

What Kelly failed to share were comments from Fox's Greta Van Susteren saying, "Yes, of course, there’s a First Amendment right and it’s very important, but the exercise of that right includes using good judgment.”

Or Bill O'Reilly saying on Fox, "It’s always cause and effect… This is what happens when you light the fuse, you get violence.”

Or frequent Fox  guest Donald Trump, “I watched Pam [Geller on Fox News] earlier, and it really looks like she’s just taunting everybody. What is she doing drawing Muhammad? I mean it’s disgusting. Isn’t there something else they could be doing? Drawing Muhammad?”

Or other Fox frequent guest, Laura Ingraham: “There are a lot of things that we can say, that we have a right to say, that we shouldn’t say. We shouldn’t unnecessarily insult people, personal attacks.

While it is entirely possible that Kelly's omission of all-things-Fox -- when it comes to illuminating the disgraceful restraints "the press" is placing on freedom of speech these days -- was an oversight, it's more likely just her unwitting acknowledgment that although you can say things, it doesn't mean you actually have to say them if it's just going to cause problems around the office.

Which is why "the jihadis" are still winning and we're doomed....

Watch the video below, uploaded to YouTube by Sophia Duffy: