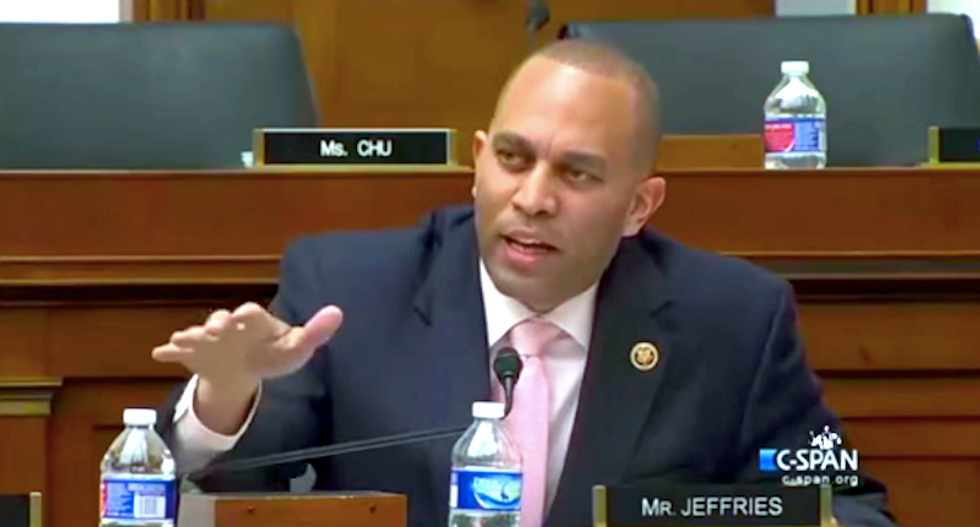 David Clarke, the Milwaukee County sheriff, described “black-on-black crime” as the “elephant in the room” Tuesday during a House Judiciary Committee hearing on the rising tensions between police officers and African-Americans.

“The conversation should be about transforming black underclass subculture behavior,” said Clarke, who frequently appears on Fox News. “The discussion must start with addressing the behavior of people who have no respect for authority, who fight with and try to disarm the police, who flee the police, and who engage in other flawed lifestyle choices.”

“Bashing the police is the low-hanging fruit,” the sheriff added. “It is easier to talk about the rare killing of a black male by police because emotion can be exploited for political advantage.”

Rep. Hakeem Jeffries (D-NY) agreed that black-on-black crime was a problem – but he pointed out that 83 percent of white homicide victims were killed by other white people.

“Is white-on-white violence also a problem that we should have a robust discussion about?” the lawmaker asked the sheriff.

Clarke and Jeffries agreed that the rates of violence within ethnic groups is roughly equivalent, which the congressman said was likely due to segregated housing patterns in many cities.

“It was mentioned that there was a cooperation issue in the black-on-black violence context – but I don’t think I’ve heard the phrase mentioned, ‘blue wall of silence,’” Jeffries said.

“If we’re going to have a conversation about cooperation when someone crosses the line, seems to me to make sense that we also have to deal with what may be another elephant in the room, to use your term,” the lawmaker added.

Jeffries next addressed the sheriff’s testimony complaining that police violence was addressed on emotional terms, using what he referred to as “false narratives” – including the slogans “hands up, don’t shoot,” “no justice, no peace” or “black lives matter.”

He asked Clarke if the reaction to Eric Garner’s death, after he was choked to death by New York City Police officers using a banned restraining maneuver, was also a “false narrative.”

Jeffries interjected and pointed out that the medical examiner had ruled Garner’s death a homicide by asphyxiation.

“In the ghetto, that’s called being choked to death,” Jeffries said.

Clarke said the facts in that case were perhaps better left to discussion at another time.

“My understanding is he died of a heart attack,” Clarke said, citing a column by the black conservative Thomas Sowell who accused police critics of “irresponsible self-indulgence” for trying to deprive officers of the right to use force as they see fit.

“When law enforcement officers tell someone they’re under arrest and they can’t use force to execute that arrest, we don’t have the rule of law when it’s merely a suggestion that they’re going to jail or to put their hands behind their back,” Clarke continued.

Jeffries told the sheriff his testimony blaming Garner for his own death was “outrageous.”

“He was targeted by police officers for allegedly selling loose cigarettes -- which is an administrative violation (and) for which he got the death penalty,” Jeffries said.

He accused Clarke of making up his own facts when reality did not suit his point of view.

“If we are going to have a responsible conversation, we’ve got to at least be able to agree on a common set of reasonable facts that all Americans can interpret – particularly in this instance, because they caught the whole thing on videotape,” the lawmaker said.

Watch video of the exchange posted online by Les Grossman: