The match game: Connect the oligarch to the GOP politician he owns 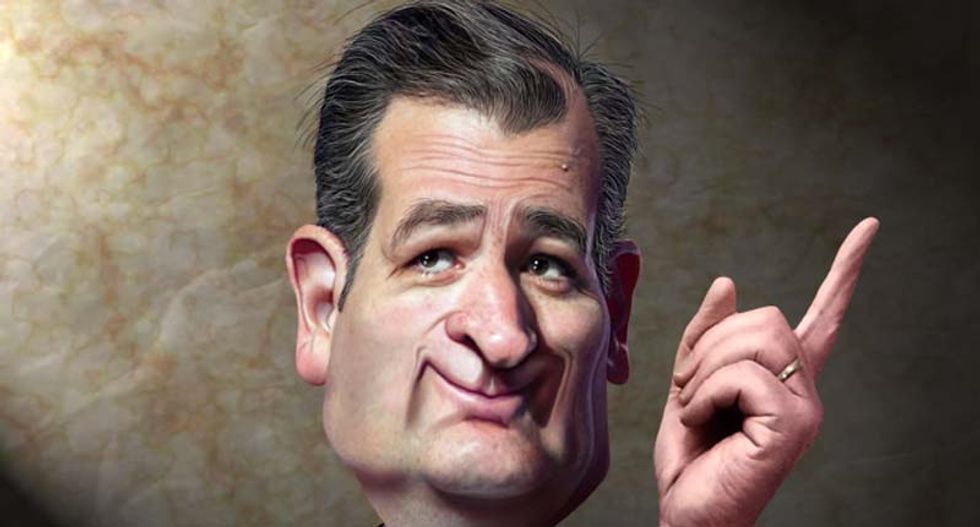 “Whether it's the Koch brothers or Soros on the left or Sheldon," former GOP presidential candidate Newt Gingrich recently said, “if you're going to have an election process that radically favors billionaires and is discriminating against the middle class—which we now have—then billionaires are going to get a lot of attention.”

Those are, pun intended, rich words coming from a man whose 2012 candidacy was almost single-handedly bankrolled by a billionaire casino magnate. More than anybody, Gingrich profited from the new limitless heights of election spending, as $15 million turned Gingrich from a disgraced former speaker to a viable presidential contender, the first in four decades to win South Carolina without taking the White House.

The 2012 GOP race was marked by the presence of billionaires anointing candidates with their millions and gaining outsized influence over the outcome, duration, and policies of the GOP primary. The 2016 race, only a couple months old, looks to be following the same course. Here are the candidates the billionaires are looking at so far.

Adelson, the 12th richest man in America at an estimated $32 billion, may be the biggest single figure in Republican politics. With seemingly endless amounts of money to spend and a monomaniacal focus on neoconservative foreign policy, Adelson not only gains the attentions of GOP candidates but also skews their policies. The right doesn’t lack for pressure to support Israel, but Adelson makes that support a dealbreaker.

Is there a more gauche way to put that? “It is not complicated for Republican politicians to come to the RJC and say they’ll stand with Israel,” said Senator Ted Cruz, speaking at Adelson’s summit in as Vegas recently. “Unless you’re a blithering idiot, that’s what you say when you come to the RJC.” Yes, but usually that’s the part you don’t say out loud.

In 2012 Adelson spent $100 million, the most of any single donor, with $15 million ultimately going to Gingrich’s otherwise floppy campaign. This year hopefuls like Cruz, Rick Perry, and Scott Walker, all of whom appeal to his fiscal conservatism, are auditioning for his fortunes.

But early reports have it that Marco Rubio, who’s fashioned himself as the foreign policy candidate of the 2016 field, has Adelson’s eye. “Adelson’s attraction to Rubio is in no small part centered on the Florida senator’s outspoken support for Israel, an issue near and dear to the billionaire’s heart,” Politico reported recently. “Rubio has reached out to Adelson more often than any other 2016 candidate, sources close to Adelson say, and has provided him with the most detailed plan for how he’d manage America’s foreign policy.”

It’s also been rumored that religious conservative candidate Mike Huckabee has gotten Adelson’s attention, in what could be a virtual repeat of Gingrich’s candidacy. While Huckabee doesn’t boast the party-wide appeal to win more than Iowa and a couple of southern states, with Adelson’s war chest he could survive for much longer, pressing his aggressive evangelical message along the way. Huckabee skipped 2012 due to a lack of funds and an expressed disinterest in fundraising. But having won the Adelson Defender of Israel award last year, he perhaps has an inside shot at the one donor who would solve that problem for him.

As has been pointed out, by dangling his wealth Adelson can influence without spending by dragging candidates closer to his position. See Senator Rand Paul, whose non-interventionist foreign policy views make him unique among the hawkish crowd, and also put him at odds with the casino mogul. There were rumors that Adelson would fund a drive to stop Paul should his candidacy gain momentum. With that in mind Paul met with Adelson when he was in Washington, D.C. in March to attend Israeli Prime Minister Benjamin Netanyahu’s controversial congressional address.

Paul reported a productive meeting between the two. And while he likely won’t see any of Adelson’s money—Adelson’s theory that Iran should be nuked doesn’t sit too well with Paul’s policies—he may have at least neutralized a very wealthy threat. Meanwhile, Adelson influenced Paul’s policies without spending a dime.

2012 candidate Rick Santorum owed most of his surprisingly successful campaign to financial investor Foster Friess, who used his wealth to prolong Santorum’s run, as Adelson did for Gingrich.

But unlike Gingrich, whose campaign sputtered over its own pointlessness, Santorum wound up winning 11 primaries, forcing eventual nominee Mitt Romney to defend his conservative flank and use up needed campaign funds, weakening him for the general election. The upshot: Santorum and his socially conservative agenda were firmly established within the GOP.

Friess must have felt this a worthy payout for his $2 million: he recently announced he would bankroll Santorum again in 2016. However, this time around, Santorum may find his portion of the GOP field more crowded, with figures like Huckabee and Cruz trying to claim the religious conservative mantle. And Friess has flirted with Walker in the past, donating to his successful defeat of a recall campaign.

Just days after Ted Cruz became the first major GOP candidate to announce his campaign, he reported a startling $31 million fundraising effort spread across four different PACs. According to political watchers, this was a record for money raised in a single week, instantly establishing Cruz as a serious primary contender.

So who’s bankrolling Cruz? Robert Mercer. A hedge fund investor, Mercer appears to be attracted to Cruz’s near-comical devotion to fiscal conservatism, which includes a plan to abolish the IRS. (Mercer’s troubles with the IRS might have something to do with that.) Mother Jones has a good rundown of Mercer’s previous contributions totaling $40 million, which makes him one of the biggest donors of the 2014 cycle, for which he saw far greater success than Adelson did in 2012.

Mercer and his wife were behind most of Cruz’s $31 million haul. The pair has helped Cruz found a bench of super PACs to which donors can donate for specific causes, “whether it’s competing in the early primary states, putting ads on the air, or investing in data and analytics,” per the National Review.

David and Charles Koch, a pair of hugely wealthy businessmen maniacally committed to implementing a big-business libertarianism across the country, spent $400 million in 2012, albeit with not much to show for it. According to their budget, they expect to more than double that in 2016, planning to spend $889 million on a collection of electoral measures, state candidates, and a presidential nominee.

That budget gives the Koch brothers a financial footprint equal to the two major political parties. The constellation of 300-400 high-priced donors the Koch brothers have assembled “represent[s] the largest concentration of political money outside the party establishment.”

Those several hundred donors route their contributions through a phalanx of funds, which target everything from policy issues to state candidates. The Kochs expect to spend about a third of its $900 million on the national race, a figure still comparative to what the major parties spent last time around.

No wonder people are talking about “the Koch Primary.” Nearly every major potential GOP candidate, from Cruz to Chris Christie, have paid private visits to the Kochs. Rand Paul has golfed with them. Marco Rubio has made himself a regular speaker at Americans for Prosperity events. Even longshot candidates like Indiana Governor Mike Pence have made their presence known to the Kochs.

The brothers said recently they have narrowed their selections down to five candidates, telling USA Today it is between Cruz, Paul, Rubio, Walker, and Bush. The Kochs do not intend to make their pick soon, instead intimating they may support several candidates initially—and expect to hear a tailored message in return. "What we expect them to do is to compete on who has a more positive message for America, rather than what's wrong with some other candidate and did he smoke pot when he was 15 or whatever,” Charles Koch said.

An early rumor said the Kochs were starry-eyed for Scott Walker, whom they have supported since he first arrived on the scene in 2009, supporting the fight against Wisconsin public sector unions that made Walker a nationwide figure and contributing millions to his campaign to defeat a recall in response. The list of potential candidates the Koch brothers released days after the Walker rumor suggest they were trying to tamp down the notion that they’d already selected a candidate.

The Kochs are less interested in establishment candidates. Mitt Romney hasn’t gotten an invitation to the Kochs' annual retreat. Meanwhile, Jeb Bush, whose prolific early fundraising gives him an independence his rival candidates lack, skipped this year’s Koch retreat due to a “scheduling conflict”—a sign he’s flush enough with campaign cash not to be beholden to any particular benefactor.