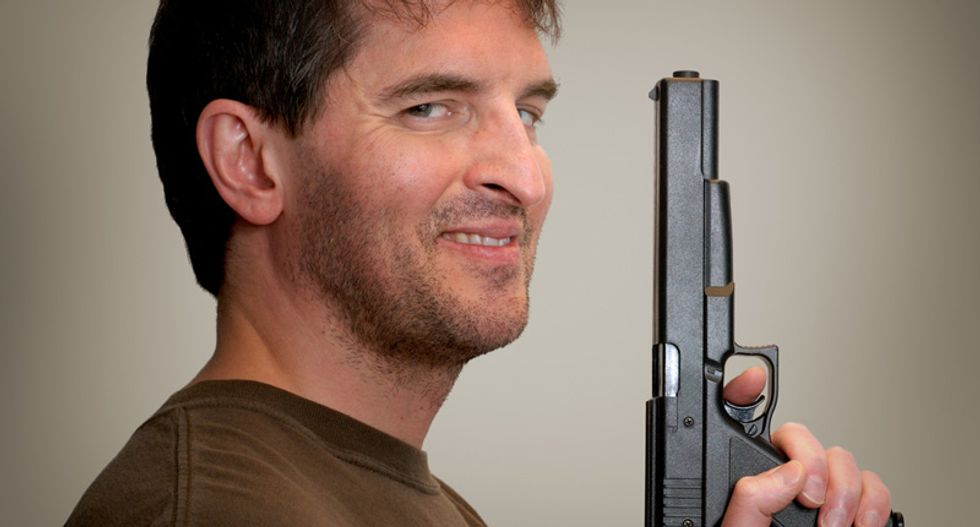 A Mav and his gun - Shutterstock

As part of its never-ending quest to make sure that handguns are cheap, plentiful, and easy for anyone to acquire and keep, the NRA inserted itself into the writing of a Louisiana bill that would have expanded protections for victims of domestic violence.

Putting bullets before people, the NRA saw to it that people in Louisiana with a history of violence -- to say nothing of a conviction for stalking --  can hang onto their guns just in case they are needed to prevent government tyranny or, should the need arise, to water the Tree of Liberty with the blood of women who are tired of being beaten.

Louisiana's HB 488, which would have provided additional protective measures for victims of domestic abuse, was gutted because the NRA thought it went too far when it included "dating partners" along with "household members."

According to a member of the state domestic violence prevention commission, the NRA "didn't want to increase the pool of people who will dispossessed of their firearms."

So what got yanked out of the bill so it could pass through committee?

More importantly, a provision was removed that would have prohibited a person convicted of stalking from possessing a firearm.

According to the Center for American Progress, from 2001 through 2010 Louisiana had more deaths per capita from guns than any other state.  Additionally, Louisiana has "the fourth-highest rate of women being killed by men, two-thirds of which occurred with a firearm."

Louisiana is both gun-nut heaven and, unsurprisingly, has a gun-murder rate two-and-a-half times higher than the U.S. average.

According to a spokesperson for the NRA, instead of taking guns away from hotheads and convicted creeps, Louisiana lawmakers should toughen enforcement of restraining orders.

The fact of the matter is that the NRA -- which is essentially the non-profit marketing and lobbying arm of the gun industry -- will never support any law which will take one penny out of the pocket of gunmakers --even if it would save the life of one woman.

It's guns before gals, making every Louisiana woman a target and, potentially, just another police blotter statistic to eventually be ignored.