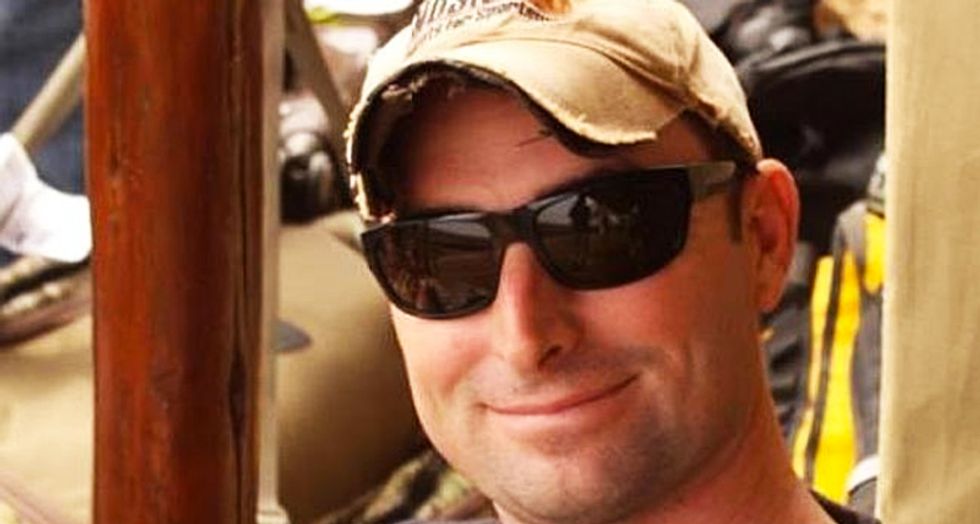 He's a jackass with money.

Knowlton -- the son of Texas oil executive Lary Knowlton (that would be this cartoon of a man here)-- is the one who dropped a cool $350,000 at an auction last year so he could kill a rare and endangered black rhino. Why did he want to kill a rhino? Because he's an asshole like his dad who has enough money to be able to travel around the world and practice the manly art of serial animal killing for fun.

Take a brief perusal of his Facebook photos (now hidden because: courage) and you will see Corey showing off a sampling of his kills in his wonderfully appointed trophy room (below) that is a subtle reminder that all of the money in the world -- to say nothing of artfully-placed indirect lighting -- can't create the illusion of good taste. 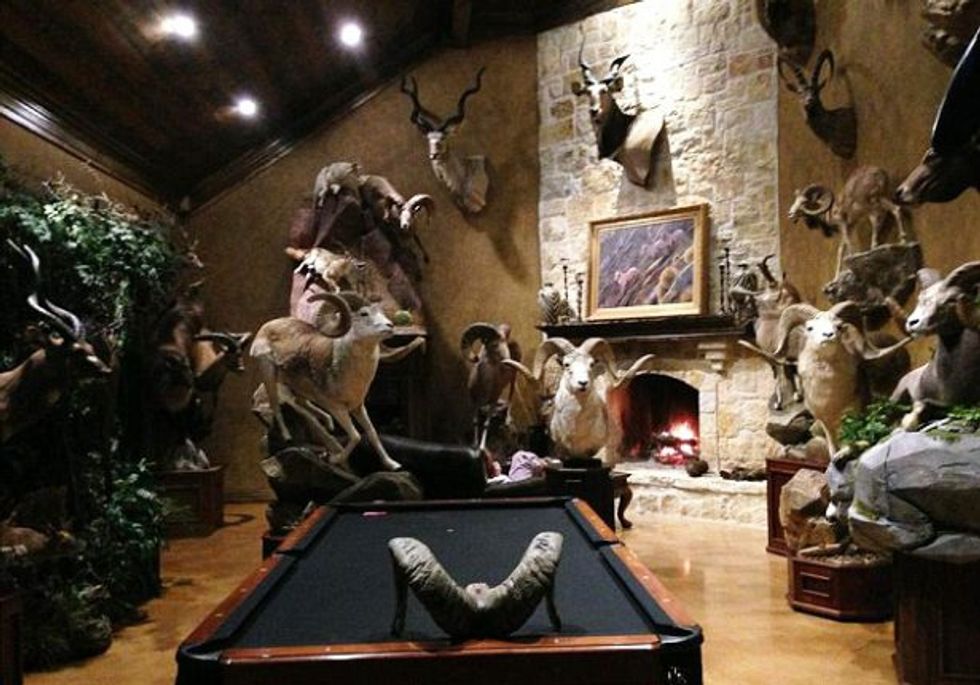 Despite attempts since last year to stop the hunt for the black rhino, the hunt went forward, the rhino was killed, and CNN was there to document it with the kind of breathless spin that most Texas families pay big bucks for when their entitled children make asses of themselves.

Here is CNN's Ed Lavendera inserting himself into the narrative:

The rhino is moving around but it's invisible. It's impossible to grasp how such a beast can move like a ghost in the brush.

The hunting party moves single file through a tree line. As the last member of the group emerges, he looks to his left and no more than 40 feet away the rhino is there, staring straight at us.

"There it is!" says the last member in the group.

It's a breathtaking sight. But this isn't the time to stand and stare. I cut to one side and the rhino starts charging in my direction.

"Ed! Get down!" shouts van Heerden.

I rush behind Knowlton and his hunting guide.

"As soon as you dropped below my gun, I could see the whole animal right behind you," Knowlton would tell me later.

I turn around and for a quick flash only see the top half of the rhino in front of us. Then four shots explode through the air.

The rhino has been hit at least three times.

The hunting party then makes the final push to find the rhino. I've lost track of time. This last push might have taken 30 minutes, it might have taken an hour. It was an incredibly emotional experience.

A tracker climbs into a tree and spots the rhino in an open field about 100 yards away. Knowlton gets into position and fires the final shots. The black rhino is dead.

Knowlton walks up from behind the rhino and when he's certain it's over, he kneels next to it.

"Any time you take an animal's life it's an emotional thing," Knowlton said.

Ahem. As an ex-hunter who only hunted for food and never for trophies: Bull-fucking-shit. That is prime-time reality show scripted-for-the-cameras crapola.

Appearing later on CNN, Knowlton explained to fellow rich person Erin Burnett that, sure, he could have just donated the money after people got all huffy about him traveling halfway around the world to murder an animal so he could bring its head back to the U.S. because he has an empty spot on the wall that needs fillin'.

But no.  This was about conservation and not just the desire to kill something to make yourself feel alive.

"If I just wanted to kill something I'd go work at a chicken plant, Erin, and just kill things all day" Knowlton said before invoking a Disney film for validation. "I believe in the circle of life, I believe human being are a part of it. I believe it's ridiculous to say we're complicit in the fact that these animals are in trouble, but we shouldn't be complicit in helping them through wildlife biology and scientific research."

And, apparently, killing them.

Asked why he enjoys slaughtering animals for sport, Knowlton said it's a "hunter thing."

"I think hunters out there understand that it's part of who we are as human beings, okay? And I don't know that everybody who is removed from that can understand, but it's a different kind of emotion. In this case, actually, I felt good about the fact that Ed Lavendera didn't get killed. It was charging him."

We should stop here to note that Lavendera presumably wouldn't have been in Namibia being charged by a black rhino if a CNN producer hadn't had visions of of badly needed viewership dancing in his or her head.

But here is where it gets good.

Asked what he is going to do with his suitable for framing trophy rhino head, Knowlton said he is going to use the head of the endangered animal that he tracked, shot, and killed to teach kids about, wait for it ... conservation.

"Erin, I think my real plan, once I get it back here, is to figure out a way to -- it'll be my personal property -- figure out a way that I can use it to raise awareness the best way I can with it. And if that means different places, that's what I'd love to do. And I don't believe any single act throughout, I mean, modern history, has brought more attention to an endangered species than this one," he rambled. "So, if you're against it, if for it, at least you're aware of the plight of the rhino, and at least you're aware now of the real dangers to it -- being poaching and habitat infringement. And the best way to do that is to incentivize the locals and get them to be a part of it, and that's exactly what this hunt is. We fed a whole village with this, Erin. We employed local people."

"It, it... from America to Africa, you well know, you've been around the world, you know the differences.  It's giant. It's huge. And just to have that meat, meant the world to those people," he rationalized. "And you understand finance too. If it pays, it stays, if it's valuable, its gonna be there. That's why we preserve things we value, that's why we have so many cows."

And if you thought the "cow" part was weird, there is this.

"If these people put a value on a black rhino's life, alive or dead, it's an amazing thing. Nobody put a lower value on it than the anti-hunting community, they could have came [sic] in and bid on it but they threatened bidders away, " he said while shrugging because his logic was so damn obvious.

In the 1970's there were approximately 65,000 black rhinos and now there are less than 5,000. That would lead one to think that -- if someone like Corey Knowlton really cared about saving the remaining ones (approximately 2,000 of which are in Namibia) -- he could have given some of his dad's money to their anti-poaching efforts and taken a flyer on killing one.

But where is the fun in that?

It's all about the bloodsport for a dissolute rich kid with too much time on his hands in a world with too many animals that need killing, stuffing, and mounting. 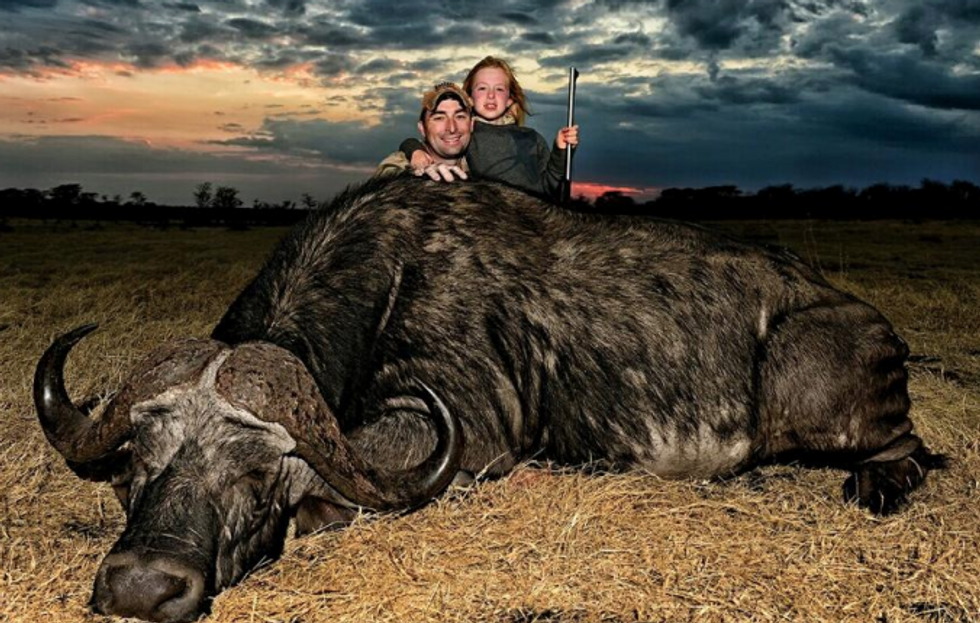 Facebook: "My Daughter and I with her first Cape Buffalo. Pretty awesome for an 8 year old or anybody for that matter.[/caption]

For conservation's sake, of course.