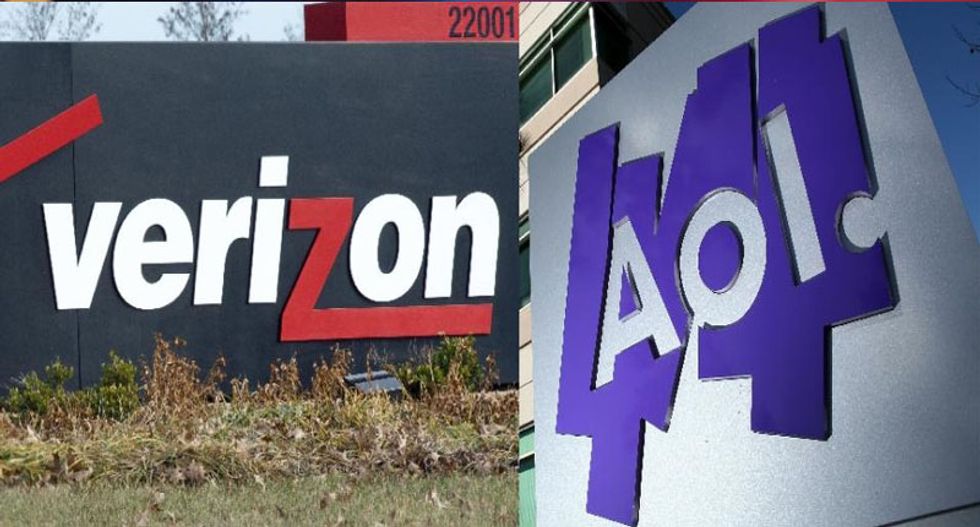 Verizon said Tuesday it is buying Internet pioneer AOL for about $4.4 billion, enabling the US telecom giant to boost its presence in online media and advertising.

"AOL has once again become a digital trailblazer, and we are excited at the prospect of charting a new course together in the digitally connected world," Verizon chairman and chief executive Lowell McAdam said in a statement.

AOL's assets include a portfolio of well-known news sites such as The Huffington Post, TechCrunch and Engadget. It also has a subscription business and produces original video content.

Verizon said it is paying $50 per share of AOL, whose stock price jumped by almost 18 percent in pre-market trading to $50.22.

Verizon said the deal, which it would fund from cash on hand and commercial paper, is subject to regulatory approvals and closing conditions and is expected to close in the coming months.

AOL rose to fame in the 1990s as the dominant provider of Internet access for Americans. The company distributed CDs enabling computer users to access the Internet for a monthly fee via dialup, before consumers turned to cable or fiber for high-speed access.

AOL took over media giant Time Warner in 2001 at the height of the dot-com boom, with AOL using its inflated stock as a currency for the transaction. The deal valuing the firms at $165 billion was among the largest corporate mergers ever.

But Time Warner was forced in 2002 to massively write down the value of AOL and the two firms split at the end of 2009.

The company has evolved rapidly since then and has focused on digital content and advertising platforms.

Verizon, one of the biggest mobile carriers in the United States, is looking for ways to expand its footprint in an increasingly mature cellphone market.

The deal allows Verizon -- which is one of the leading US broadband providers -- to get a better foothold in the rapidly growing digital advertising sector.

AOL has been long rumored to be seeking a merger partner, with considerable talk of a tie-up with Yahoo which never materialized. Verizon could bring in the financial resources for a push into online advertising.

AOL took just 0.74 percent market share of the $145 billion digital advertising market worldwide in 2014, according to eMarketer, trailing Google with some 31.4 percent and Facebook's 7.9 percent.

"The visions of Verizon and AOL are shared," Armstrong said in the statement.

"The companies have existing successful partnerships, and we are excited to work with the team at Verizon to create the next generation of media through mobile and video."