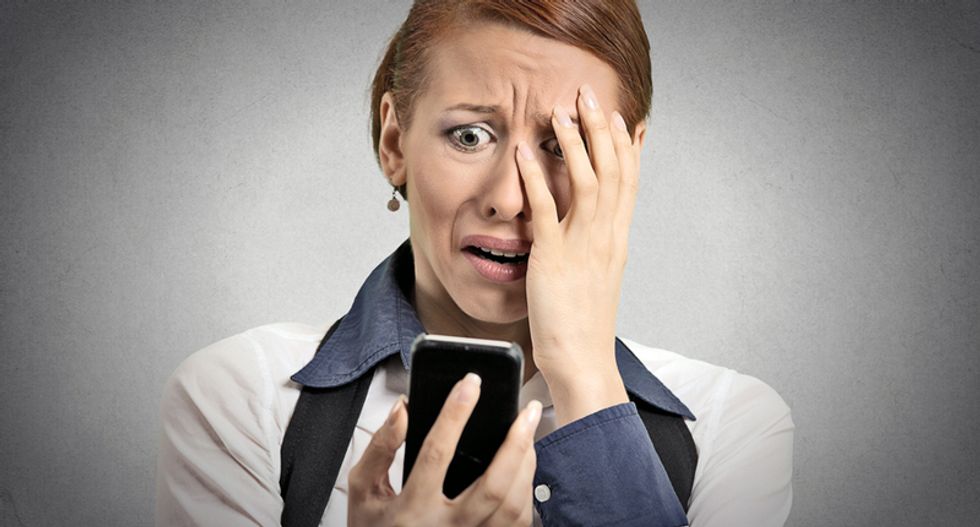 A shocked woman looks at her smartphone in horror (Shutterstock)

A California woman claims she was fired after she removed an app from her phone that allowed her employer to track her at all times.

Myrna Arias is a former sales executive for money transfer service called Intermex. She claims that her former boss, John Stubits, fired her after she removed a job-management app called Xora from her phone. Arias says she was even monitored on the weekends when she wasn't working. She is suing the company for invasion of privacy and other allegations. In her suit, she claims that she told Stubits that the tracking was illegal, but he told her she had to tolerate it. The suit even claims that Stubits even bragged about being able to know what speed Arias was driving through the app.

David Kravets, a senior editor at Ars Technica, cites an email from Arias' attorney that was sent to the website. The attorney, Gail Glick, wrote that, "The app had a 'clock in/out' feature which did not stop GPS monitoring, that function remained on. This is the problem about which Ms. Arias complained. Management never made mention of mileage. They would tell her co-workers and her of their driving speed, roads taken, and time spent at customer locations. Her manager made it clear that he was using the program to continuously monitor her, during company as well as personal time."

The Atlanta Police Department has suspended a sergeant who kicked a woman in the head while she was lying on the ground handcuffed, in an incident captured on video Monday.

The woman's neighbor, who filmed the video that quickly went viral after being posted on social media by Atlanta Uncensored, told the city's CBS affiliate that the sergeant was retaliating after the victim, who reportedly has mental-health issues, spat on his boot.