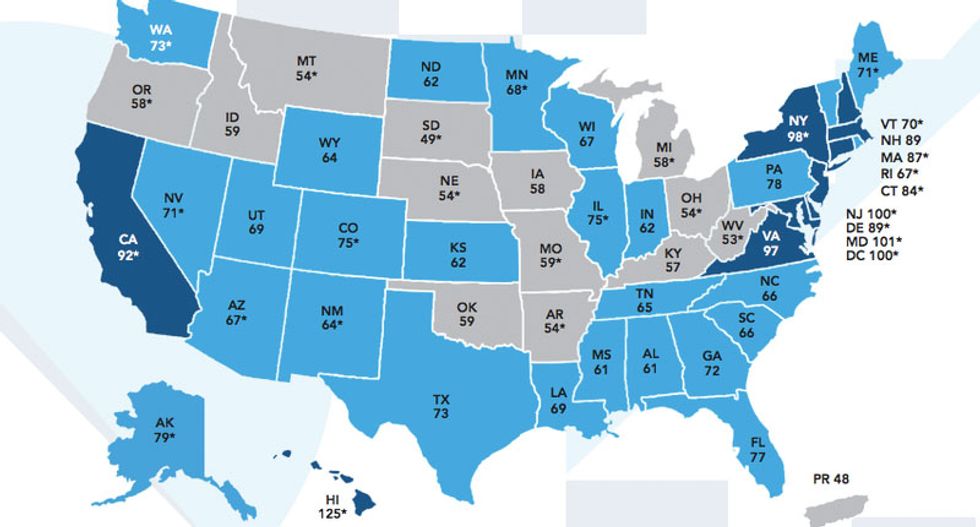 A new report by the National Low-Income Housing Coalition shows that there is no state in the U.S. where a full-time, minimum-wage worker can afford the rent of a one-bedroom apartment, Vox reports.

According to the report, the national average Housing Wage in 2015 is $19.35 for a two-bedroom unit, and $15.50 for a one-bedroom unit, while the federal minimum wage remains at $7.25 per hour in 2015, which hasn't been raised since 2009. In 13 states and D.C., Housing Wage is more than $20 per hour. The Housing Wage is an estimate of the full-time hourly wage that a household must earn to afford a decent apartment at HUD’s estimated Fair Market Rent (FMR) for no more than 30% of their income.

The data from the report show a gap between wages and rents across the country. In no state or D.C. can a full-time minimum-wage earning worker at the federal minimum wage afford a one- or two-bedroom apartment for his or her family. With the exception of just a few counties in Washington and Oregon (where the state minimum wage is $9.47 and $9.25, respectively), in no county in the U.S. a one-bedroom unit at the FMR is affordable to someone working 40 hours a week at the minimum wage, according to the report.

A map included in the report shows the hours a worker would have to work each week to afford a one-bedroom apartment. Among the states where a worker has to work the most hours to afford housing are Hawaii (125), Maryland (101), DC (100), New Jersey (100) and California (92).

These data may help explain the findings of a Brookings Institution report. According to the report, an average resident of a U.S. metro area lives 90 minutes or less away from only 30 percent of the jobs in that area.

Living far away from jobs, in turn, can impede residents' ability to earn more, Vox's Joseph Stromberg points out. A recent study which tracked 5 million children starting in the 1980's found that among factors such as crime rates, schools, and levels of inequality, a neighborhood's average commuting time strongly correlated with its residents' ability to ascend to a higher income bracket than their parents.

Read the full report by the National Low-Income Housing Foundation.