Bernie Sanders: 'I'm not a great fan' of Benjamin Netanyahu 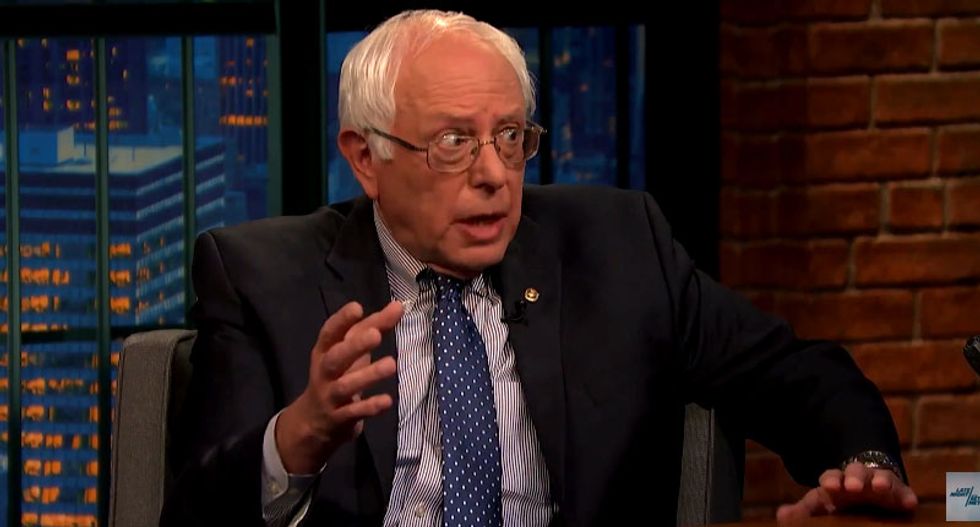 Earlier this week, NPR host Diane Rehm asked Senator Bernie Sanders (I-VT), who is competing for the Democratic nomination for the presidency, whether he is an Israeli-American dual citizen (he isn't). What was less noticed was the dialogue between Rehm and Sanders afterward, where they discussed the Israeli-Palestinian conflict. Sanders went on to explain his views on Netanyahu:

REHM: Tell me your feeling about whether there should be a two-state solution should Palestine be given statehood?

SANDERS: Absolutely. What you have in that part of the world is an unspeakable tragedy. And it seems like it's never-ending and it seems like it every year gets worse and worse and more killing and more bombings and everything else. And again, Diane, if I had the magical solution to that problem I would be in the president's office today giving it. I don't have it. But clearly the goals are two-fold: number one the Palestinian people, in my view, deserve a state of their own, they deserve an economy of their own, they deserve economic support from the people of this country. And Israel needs to be able to live in security without terrorist attacks. Those are the goals of I think any sensible foreign policy in that region.

SANDERS: Well, I gotta tell you, I am not a great fan of President Netanyahu I did not attend the speech that he gave before the joint session of Congress. I think it was opportunistic. I think he was using it as part of his campaign for re-election. I think he was being used or did use the Republicans to go behind the President's back. And I think in that region sadly on both sides I don't think we have the kind of leadership that we need. And so you know I think the President is trying to do the best that he can in enormously difficult circumstances.

Sanders did not call for ending the sizable diplomatic, military and economic support that Israel receives from the United States. He didn't match the position of his brother, Larry Sanders, who ran for Parliament in Britain under the Green Party ticket in calling for boycotts against Israel.

But it is unusual for a major party candidate seeking the presidency of the United States to criticize Israel's government during the campaign. Hillary Clinton strongly defended Netanyahu during a summer 2014 interview with the Atlantic and never offered any criticism of his attempt to sink the Iran negotiations. One of her biggest backers is the pro-Israel tycoon Haim Saban, who is working with Sheldon Adelson to crack down on Palestinian activism on American campuses.

Former welfare agency director John Davis is set to plead guilty on Thursday to two federal charges and 18 state counts of fraud or conspiracy related to his role in the Mississippi welfare scandal, according to separate federal and state court filings.

The new federal charges pertain to welfare funds Davis allegedly helped funnel to the companies of retired professional wrestler Ted "Teddy" DiBiase Jr., son of famed WWE wrestler Ted "The Million Dollar Man" DiBiase. Davis and Teddy DiBiase Jr. had developed a close relationship during Davis' term as welfare director from 2016 to 2019, as Mississippi Today has reported in its investigative series "The Backchannel."

The co-hosts of "The View" started off the Thursday show talking about Donald Trump's bad day of legal problems.

Trump is not only facing business problems with a civil lawsuit from the attorney general of New York, but the 11th Circuit Court of Appeals also delivered a repudiation of Trump's legal arguments. The Department of Justice is now free to continue using classified records seized from Mar-a-Lago in its investigations.

U.S. Rep. Jamie Raskin (D-MD) has once again achieved "national treasure" and "hero" status to the many Americans who watched his unrelenting destruction of Republican talking points and conspiracy theories about the House Select Committee on the January 6 Attack, on which he serves.

Congressman Raskin, a former constitutional law professor, was the lead impeachment manager for the second impeachment of Donald Trump, and has repeatedly been the subject of praise for his passionate defense of democracy.