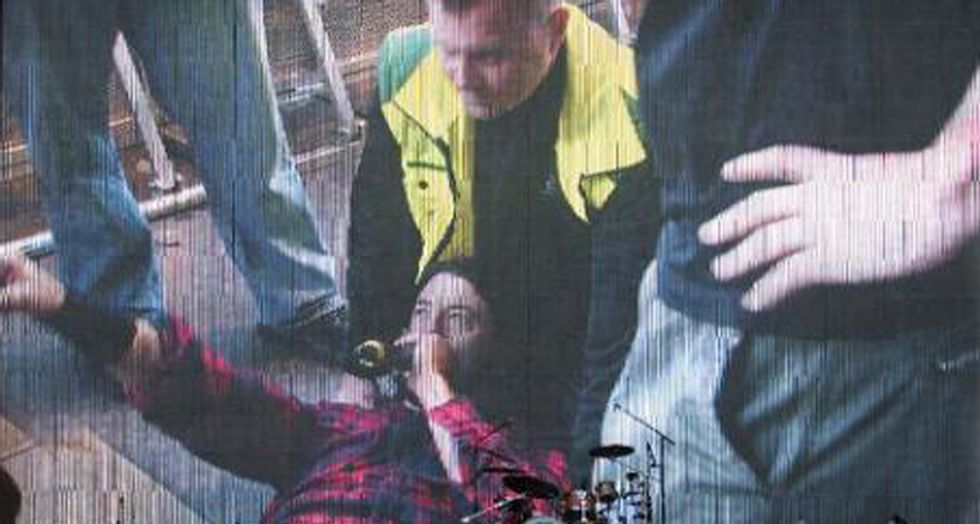 A screen shows Foo Fighters singer Dave Grohl behind an empty stage during the band's concert in Gothenburg, Sweden, on June 12, 2015, during which Grolh break his leg (AFP)

Foo Fighters frontman Dave Grohl gave new meaning to the advice for performers to "break a leg" after he fell from stage and returned to play in a cast.

Grohl, the former drummer of Nirvana, was performing in Gothenburg, Sweden, when he tumbled during the second song and badly injured himself, according to several pictures and videos on social media.

But instead of cutting short the show, a recumbent Grohl at first jokingly sang the David Bowie and Queen song "Under Pressure" and vowed to press on.

"I think I just broke my leg," Grohl told the crowd, according to a fan video.

But before the crowd could voice disappointment, Grohl said: "I'm going to go to the hospital, I'm going to fix my leg, but then I'm coming back and we're going to play for you again."

Sure enough, Grohl returned after an hour with his leg in a cast, alternately performing with crutches or sitting on a chair, according to footage shared by fans -- some of whom, in reference to a Foo Fighters song, used the hashtag #MyHero.

On Twitter, the Foo Fighters published a photo showing an X-ray of what appears to be a broken bone, along with the words: "Thank you Gothenburg. That was amazing."

Grohl has long earned a reputation among fans and critics as the Mr. Nice Guy of the rock world, despite the dark history behind Nirvana.

Grohl frequently campaigns for progressive causes and has spoken out against drug use.