Captive virgins, polygamy and sex slaves: What marriage would look like if we actually followed the Bible 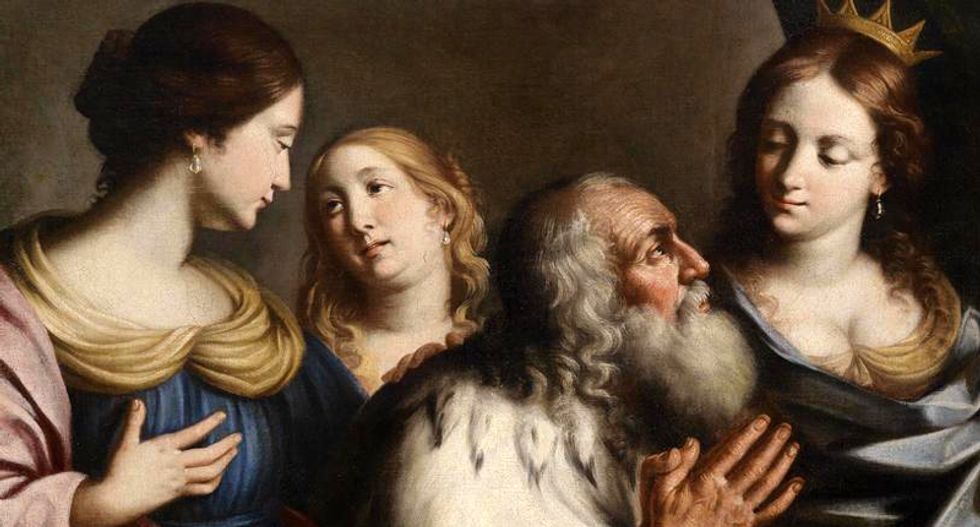 Bible believers are beside themselves about the prospect that marriage norms and laws are changing, but let me tell you a secret about Bible believers that I know because I was one. Most don’t actually read their Bibles.

If they did, they would know that the biblical model of sex and marriage has little to do with the one they so loudly defend. Sex in the Bible includes rape, incest, master-slave sexual relations, captive virgins, and more. Of course, just because a story is told in the Bible doesn’t mean it is intended as a model for moral behavior. Does God forbid or command the behavior? Is it punished or rewarded?  In the New Testament stories, does Jesus change the rules or leave them alone?  By these criteria, the Bible not only describes many forms of sexual relationships (including sexually coercive relationships), it gives them the divine thumbs up.

Not One Man, One Woman

The God of the Bible explicitly endorses polygamy and sexual slavery and coerced marriage of young virgins along with monogamy. In fact, he endorses all three to the point of providing detailed regulations. Based on stories of sex and marriage that God rewards and appears to approve one might add incest to the mix of sexual contact that receives divine sanction.

Nowhere does the Bible say, “Don’t have sex with someone who doesn’t want to have sex with you.” Consent, in the Bible, is not a thing.  Furthermore, none of the norms that are endorsed and regulated in the Old Testament law – polygamy, sexual slavery, coerced marriage of young girls—are revised, reversed, or condemned by Jesus. In fact, the writer of Matthew puts these words in the mouth of Jesus:

Do not think that I have come to abolish the Law or the Prophets; I have not come to abolish them but to fulfill them. I tell you the truth, until heaven and earth disappear, not the smallest letter, not the least stroke or a pen, will by any means disappear from the Law [the Old Testament] until everything is accomplished. (Matthew 5:17-18)

The Law of which Jesus speaks is the Law of Moses, or the Torah, and anyone who claims the Bible as the perfect word of an omniscient, omnipotent, omnibenevolent God should have the decency to read the Torah carefully—and then keep going.

Polygamy. Polygamy is a norm in the Old Testament and accepted in the New Testament. Biblicalpolygamy.com has pages dedicated to 40 biblical figures, each of whom had multiple wives. The list includes patriarchs like Abraham and Isaac. King David, the first king of Israel may have limited himself to eight wives, but his son Solomon, reputed to be the wisest man who ever lived had 700 wives and 300 concubines! (1 Kings 11)

Sex Slaves. Concubines are sex slaves, and the Bible gives instructions on acquisition of several types of sex slaves, although the line between biblical marriage and sexual slavery is blurry. A Hebrew man might, for example, sell his daughter to another Hebrew, who then has certain obligations to her once she is used. For example, he can’t then sell her to a foreigner. Alternately a man might see a virgin war captive that he wants for himself.

War Booty. In the book of Numbers (31:18) God’s servant commands the Israelites to kill all of the used Midianite women who have been captured in war, and all of the boy children, but to keep all of the virgin girls for themselves. The Law of Moses spells out a purification ritual to prepare a captive virgin for life as a concubine. It requires her owner to shave her head and trim her nails and give her a month to mourn her parents before the first sex act (Deuteronomy 21:10-14). A Hebrew girl who is raped can be sold to her rapist for 50 shekels, or about $580 (Deuteronomy 22:28-29). He must then keep her as one of his wives for as long as she lives.

Brother’s Wife. A man might acquire multiple wives whether he wanted them or not if his brother died. In fact, if a brother dies with no children, it becomes a duty to impregnate his wife. In the book of Genesis, Onan is struck dead by God because he fails to fulfill this duty – preferring to spill his seed on the ground rather than providing offspring for his brother (Genesis 38:8-10). A New Testament story shows that the tradition has survived. Jesus is a rabbi, and a group of scholars called Sadducees try to test his knowledge of Hebrew Law by asking him this question:

Teacher,” they said, “Moses told us that if a man dies without having children, his brother must marry the widow and raise up offspring for him. Now there were seven brothers among us. The first one married and died, and since he had no children, he left his wife to his brother. The same thing happened to the second and third brother, right on down to the seventh. Finally, the woman died. Now then, at the resurrection, whose wife will she be of the seven, since all of them were married to her?” (Matthew 22:24-28).

Jesus is too clever for them and points out that in Heaven, that place of perfect bliss, there is no marriage.

Having a brother act as a sperm donor isn’t the only biblical solution to lack of offspring.  The patriarch Abraham is married to his half-sister Sarah, but the two are childless for the first 75 years or so of their marriage. Frustrated, Sarah finally says, “The LORD has kept me from having children. Go, sleep with my slave; perhaps I can build a family through her.” Her slave, Hagar, becomes pregnant, and then later Sarah does too and the story gets complicated (Genesis 16).  But that doesn’t stop Abraham’s grandson Jacob from participating in a competition, in which his two wives repeatedly send in their slaves to get pregnant by him, each trying to get more sons than the other (Genesis 30:1-22).

These stories might be irrelevant to the question of biblical marriage were it not that Bible believers keep telling us that God punishes people when he dislikes their sexual behavior. He disliked the behavior of New Orleans gays so much, according to Pat Robertson, that he sent a hurricane to drown the whole city – kind of like Noah’s flood. And yet, according to the Bible story, both Abraham and Jacob were particularly beloved and blessed by God.

The point is that marriage has changed tremendously since the Iron Age when the Bible was written. For centuries, concubines and polygamy were debated by Christian leaders – accepted by some and rejected by others. The nuclear family model so prized by America’s fundamentalist Christians emerged from the interplay between Christianity and European cultures including the monogamous tradition of the Roman Empire. As humanity’s moral consciousness has evolved, coerced sex has become less acceptable even within marriage while intertribal and interracial marriage has grown in acceptance. Today even devout Bible believers oppose sexual slavery. Marriage, increasingly, is a commitment of love, freely given. Gay marriage is simply a part of this broader conversation, and opposition on the part of Bible believers has little to do with biblical monogamy.

Since many Christians haven’t read the whole Bible, most “Bible believers” are not, as they like to claim, actually Bible believers. Biblical literalists, even those who think themselves “nondenominational,” almost all follow some theological tradition that tells them which parts of the Bible to follow and how. Granted, sometimes even decent people do get sucked into a sort of text worship that I call bibliolatry, and Bible worship can make a person’s moral priorities as archaic and cruel as those of the Iron Age tribesmen who wrote the texts. (I once listened, horrified, while a sweet, elderly pair of Jehovah’s Witnesses rationalized the Old Testament slaughter of children with the same words Nazis used to justify the slaughter of Jewish babies.)

But many who call themselves Bible believers are simply, congenitally conservative – meaning change-resistant. What really concerns them is protecting the status quo, an ancient hierarchy with privileged majority-culture straight males at the top, which they justify by invoking ancient texts. Gay marriage will come, as will other reproductive rights, and these Bible believers will adapt to the change as they have others: reluctantly, slowly and with angry protests, but in the end accepting it, and perhaps even insisting that it was God’s will all along.