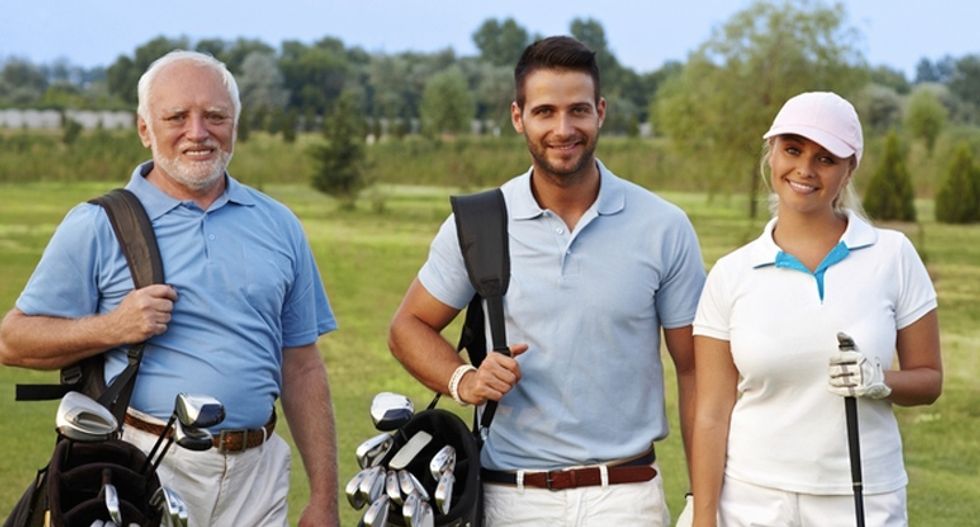 A conservative talk radio host in California says that people are not "equal" when it comes to water rights, and complains that water rationing policies mean he might have to play golf on courses with brown grass.

California is facing one of its most extreme droughts in history. Governor Jerry Brown declared a state of emergency in January. Throughout California, citizens are reducing their water consumption in an effort to conserve one of humankind's most precious resources. And a basic human right to which every person is guaranteed access under international law.

According to the Washington Post, wealthy residents in Rancho Santa Fe are unhappy with the concept of cutting back on water usage.

People “should not be forced to live on property with brown lawns, golf on brown courses or apologize for wanting their gardens to be beautiful,” says resident Steve Yuhas, the Post reports. “We pay significant property taxes based on where we live. And, no, we’re not all equal when it comes to water.”

The Post describes Yuhas' town as an "ultra-wealthy enclave" in "a bucolic Southern California hamlet of ranches, gated communities and country clubs that guzzles five times more water per capita than the statewide average."

Further, when Brown called for a 25 percent reduction in water use, residents of Rancho Santa Fe increased consumption by 9 percent instead.

On July 1, "for the first time in its 92-year history" the Post reports, "Rancho Santa Fe will be subject to water rationing." In particular, the state would like the amount of water the community devotes to its backyard swimming pools cut by half. If residents do not comply, they can face a fine of up to $100, which the Post points out is not an out-of-reach penalty for many area residents.

"I think we’re being overly penalized, and we’re certainly being overly scrutinized by the world,” Gay Butler says while out for a trail ride on her show horse, Bear. “It angers me because people aren’t looking at the overall picture. What are we supposed to do, just have dirt around our house on four acres?”

Yuhas "abhors the culture of 'drought-shaming,'" says the Post, "especially the aerial shots of lavish lawns targeted for derision on the local TV news."

"I’m a conservative, so this is strange, but I defend Barbra Streisand’s right to have a green lawn,” Yuhas says. “When we bought, we didn’t plan on getting a place that looks like we’re living in an African savanna."

According to his website, Yuhas is a "rising star" in conservative radio, and can be "heard live from San Diego to Santa Barbara; Mexico to Arizona and all over the world." Yuhas quotes an "entertainment reporter" (Randy Dotinga, whose article ran in the San Diego Union-Tribune) who in 2005 described the pundit as "[sounding] like just about any other right-wing talk-show host on the dial... His guests include the usual array of newsmakers and gadflies, and his running commentary is sprinkled with nasty zingers about liberals and Democrats. He buddies around with like-minded colleagues. And his arch-conservative opinions are reliably predictable."

"It is not exactly that simple," Yuhas writes on his website, "for this Jewish disabled former military man who happens also to be gay."

On Sunday, Yuhas took some heat on Twitter for his remarks about water rationing:

Then, Yuhas responded. He stands by his words, but says they were taken out of context. Yuhas also encourages a presidential candidate whose first name is Jeb to "embrace [his] Bush."