Dana Perino rips Fox colleague: You've been 'pandering' to Donald Trump to get on his reality show 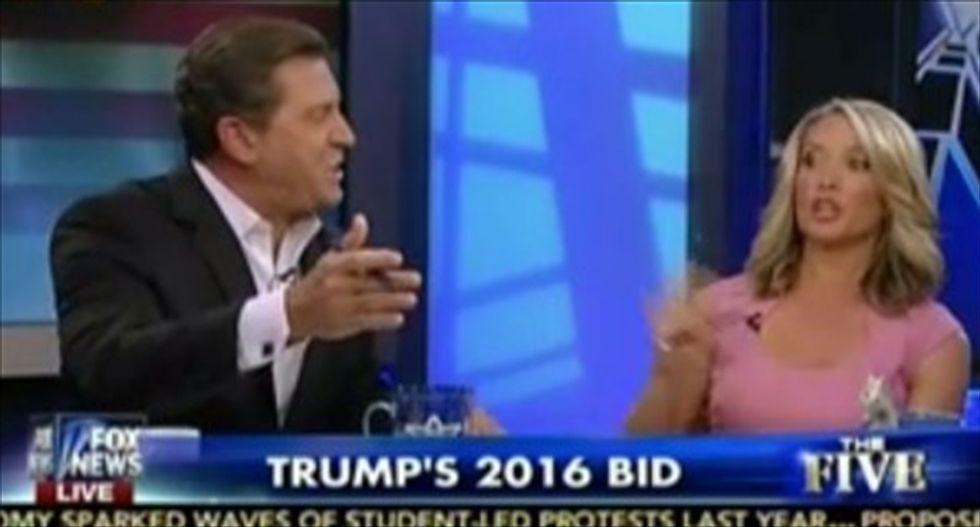 Fox News hosts Dana Perino and Eric Bolling clashed during Wednesday's episode of The Five, with Perino accusing Bolling of trying to curry favor with Donald Trump in order to appear on his reality show, Media Matters reported.

"I understand that you have a deal that you're trying to work on with him. I saw the Twitter last night," Perino said. "I just don't see how that's any different than how another journalist is actually pandering when you said you've been trying to close the deal for years for you to be on Celebrity Apprentice."

"I don't know what you're talking about," Bolling responded.

Perino was referring to this online exchange between Bolling and Trump, which followed Bolling wishing Trump well as he embarked on his presidential candidacy:

"Oh, my god. You actually think that," Bolling told Perino on Wednesday. "I've been friendly with Donald Trump for 15 years."

"You're the one that was shouting it from the rooftop yesterday," she shot back.

"Are you actually saying you're going to accuse me of saying that Donald Trump has some good ideas that are resonating with America because I want to be on Celebrity Apprentice?" Bolling asked her. "Please tell me that's not the case."

"I am saying it," Perino replied.

"I will tell you unequivocally, that is not the case. I can't be on Celebrity Apprentice anyway," Bolling said. "I'm a host at Fox News. I'm not allowed to."

"But you did want to do it," he told Bolling. "You campaigned for it. You asked to be on it."

"Seven years ago, Donald Trump came to Fox and said, 'Hey, can he be on Celebrity Apprentice?'" Bolling explained. "The boss said no."

He added, "Dana, I have way more ethics than to use this platform which I love dearly. I was here from Day One. I hope to be here [on the last day.]"

"Guess what? So was I," Perino replied.

Both Perino and guest panelist Juan Williams criticized Trump earlier in the segment after Trump wished aloud that television mogul Oprah Winfrey would be his running mate.

Watch the argument, as posted by Media Matters on Wednesday, below.