Duggars tell Fox’s Megyn Kelly: It was 'nothing like rape,' it was 'just inappropriate touching' 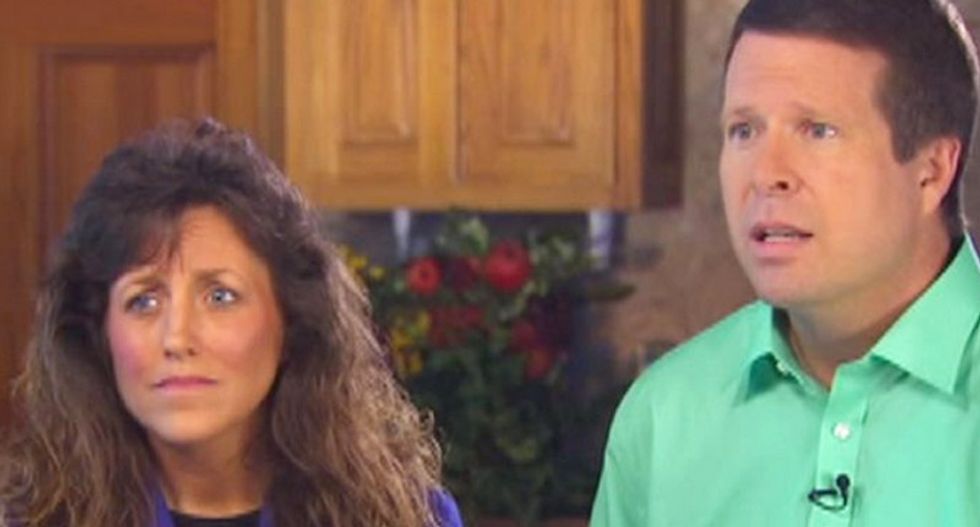 Michelle and Jim Bob Duggar on The Kelly File - Screencap

Speaking with Megyn Kelly on Fox News, a distressed looking Jim Bob and Michelle Duggar admitted their eldest son Josh had molested his sisters, but described it as "nothing like rape, " only  "inappropriate touching” over their clothes.

Making their first appearance on the network that almost completely avoided the topic when it broke right before the Memorial Day weekend, the Duggars agreed to sit down with Kelly, who previously stated that it "wouldn't be an interrogation" while at the same time saying "nothing will be off limits."

Saying that their tearful son Josh came to them and "shared" what he had done, Michelle said "Here we've tried to raise our kids to do what's right, to know what's right, and yet one of our children made some really bad choices and I think, as a parent, we were just --  we were devastated."

Jim Bob explained that Josh admitted that he was "just curious about girls," with the Duggars saying their girls had no idea what had happened since they were asleep when they were groped -- only being told later when their parents discovered it was not a one-time incident.

Jim Bob Duggar made a great point of saying it was "nothing like rape," but that it instead was "just inappropriate touching over the clothes."

Asked why they didn't turn their son in, Jim Bob explained that  he was told by a friend that "juvenile youth sex offender facilities" were notoriously unsuccessful with dealing with juvenile offenders and would be detrimental to 15-year-old Josh, so they turned to friends who shared their faith for his rehabilitation.

It was then that they sent Josh away for his rehabilitation.

Asked why they directed their attentions to Josh, at the expense of his sisters, the Duggars described their son as a "sheep that had gone astray."

Kelly then turned the focus on the juvenile record the Duggars believed had been sealed, with Michelle and Jim Bob Duggar blaming the police chief who released it, saying he had "an agenda" or was "possibly bribed" and "showed no consideration" for the victims.

They indicated they are considering a lawsuit against the city, while adding that the bigger story was how the information got released.

Jim Bob made a point that the family doesn't consider Josh a pedophile, while relying upon the legal definition of the word "pedophile."

Appearing with their parents -- and to be broadcast Friday night -- Jill and Jessa Duggar admitted they were the two of the ones who had been groped, with Jill defending her brother.

"I do want to speak up in his defense against people who are calling him a child molester or a pedophile or a rapist, some people are saying,” Jessa told Kelly. “I’m like, ‘That is so overboard and a lie really.’ I mean people get mad at me for saying that, but I can say this because I was one of the victims.”

The tearful Jessa Duggar blamed the media for the reporting on her molestation by her brother, saying, "We're victims, they can't do this to us!"

Asked by Kelly, if they felt that the "backlash" against them was because of  "who you are and what you stand for," the Christian couple looked at each other before Michelle Duggar said, "I think somehow they do."

Kelly then directed the conversation away from the molestation, and into a discussion of the Duggar's aggressive form of Christianity.

"Christianity is not about being perfect or about being a perfect family, but it’s actually about being forgiven," Jim Bob explained. "And so I think, as people on the outside think, 'Well, Christians are supposed to be perfect. You’re supposed to live this perfect life.' No. You know what? All of us as Christians, we struggle every day."

Watch video below uploaded to YouTube by Les Grossman: