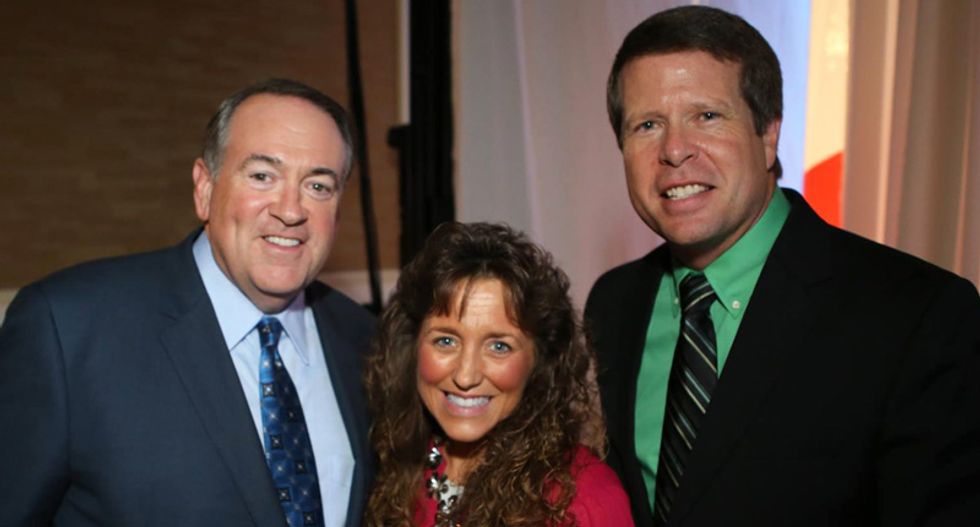 Fox News fans rallied to defend the Duggars after their disastrous interview with Megyn Kelly.

In the interview that aired Wednesday night, Jim Bob and Michelle Duggar tried to excuse sexual abuse by their eldest son, Josh, against four of his sisters and at least one other girl more than a decade ago, when he was a teenager.

“It sounds like the parents are sorry for their mistakes and I'm glad Josh's sister forgave him,” posted one commenter, liv4myfamily. “I hope this will all over with soon and 19 kids and counting will start airing new episodes on TLC. My kids were heartbroken when they took it off the air and I told them that we need to forgive Josh for what he did because God has.”

Other commenters criticized the “liberal” media for reporting the story and identifying the Duggar girls – two of whom sat down with their parents for the interview and said they’d forgiven their brother for molesting them as they slept.

“This happened when they were all underage and Josh gets no pity but liberals have now made the girls victims again...all for ratings and political ammo...now that's sick," said bsween.

A lot commenters brought up Baltimore, where riots broke out following the death of a black man while in police custody.

"One out of 'nineteen kids' being defective isn't that bad when you compare that to most families," said obamabotsbegone. "Compare that with the inner city families in Baltimore, Chicago etc... No excuse for his actions but..."

Race came up a lot, actually.

"SexualMisconduct is in every race, religion, and political arenas," said jeanne_101. "To pretend it's only a conservative Christian problem is ridi culous (sic)."

So, too, did Bill Clinton.

"This is a tragedy for this family!" said deogratias. "It wasn't so big a deal when we had a sitting president have sexual contact with a young girl in the oval office and then lied about it! He gets to give speeches for $500,000.00 dollars and the media finds him to be an upstanding person! Liberals suck!"

Fox News fans seem to harbor a grudge that Bill Clinton continues to show his face in public.

"The world forgave Bill Clinton, a man who surely knew what he was doing and he continued to lie and show no remorse. He was not a child who was reaching puberty and was curious," said republican. "He was a man who wanted to satisfy his needs at any cost......but.... he was given a full reprieve."

"Liberals motto...'Incest is Best,'" said cobra129, who offered some explanation in a follow-up post. "FDR....inter-marrying."

One reader lashed out at "bashers, haters, fear mongerers" who judged the Duggars on a cascade of media reports on the family's response to the pattern of sex abuse.

"This is a family affair that appears to have been handled to the benefit of everyone involved," said jimmyflow. "Who are we to judge? How many of you can claim to be more perfect than this family - or at least free from the sins with which many Christians struggle against daily? The answer is that none of you can claim perfection or to be in anyway morally superior to this family. You want to criticize because you disagree with their faith, which is like them disagreeing because you decide to be gay or to smoke weed."

A lot of commenters wondered why public opinion should matter on a story about a celebrity family as TLC considers whether to resume airing their popular reality show or possibly spin off two of the eldest daughters to their own show.

"You all are dis gusting to even give this story more media then it needs to get! if we can all agree what has happened is horr ible!" chimed in jeanne_101 and her itchy space bar. "don't keep putting blame on who's fault it is, does it matter? we all know what should happen to this person. justice! not like any of our opinions will make a differences in the long run."

Some called down God's wrathful vengeance.

"I feel sorry for those who weren't there and know nothing about what really happened that are passing judgement like they've never done anything wrong in their lives," said incognojoe. "My hope is, when it's their turn, and they're begging for forgiveness that they receive none!"

There were, thankfully, a few rays of hope that some Fox News fans could see beyond their tribal identity and recognize moral hypocrisy when they saw it.

"I am a republican and I watch Fox News but I cannot believe how they are handling this situation," said jen78. "First of all they are no longer allegations if Josh has admitted it so stop calling them allegations! Second of all the parents let this go on. He should have been removed from the home after the first time he came to them. They should be held accountable for that. They failed to protect their daughters from a predator. Third of all Fox News needs to stop focusing on the fact that the police report was illegally released. That is just a small part of the story and it takes away from the fact that the Duggars allowed this to continue to happen and more of their children were harmed. Wake up Fox News!!!! You are making excuses for an abuser and terrible parenting."

'King Trump' dreams of a glorious return: It seems preposterous, but we laugh at our peril

The House Jan. 6 Select Committee has Donald Trump dead to rights. Over the course of four public hearings — with a fifth unexpectedly scheduled for Tuesday — the committee has presented a compelling de facto indictment of Trump and his coup cabal for their crimes on and around Jan. 6, 2021, including treason. The evidence is so conclusive that if Attorney General Merrick Garland does not prosecute Trump, that choice will itself be a crime against American democracy and society.

Ultimately, if Garland refuses to act, future history books will forever connect him to Trump's coup attempt. Such hypothetical accounts may observe that after a defeated president and his confederates attempted to overthrow American democracy, the nation's top law enforcement official declined to hold him accountable — and that led directly to the collapse of democracy and the rise of a fascist regime.

In a column for the conservative Bulwark, longtime attorney Philip Rotner explained that, based upon recent events, the most likely reason Donald Trump might serve time in jail will be due to his "fake elector scheme."

Noting a recent flurry of subpoenas that were issued in the past week to officials in multiple states who were part of the scheme to replace their states' actual electoral votes with their own based on fraudulent election claims, the attorney said the Department of Justice is following the correct trail if they want to indict the former president.